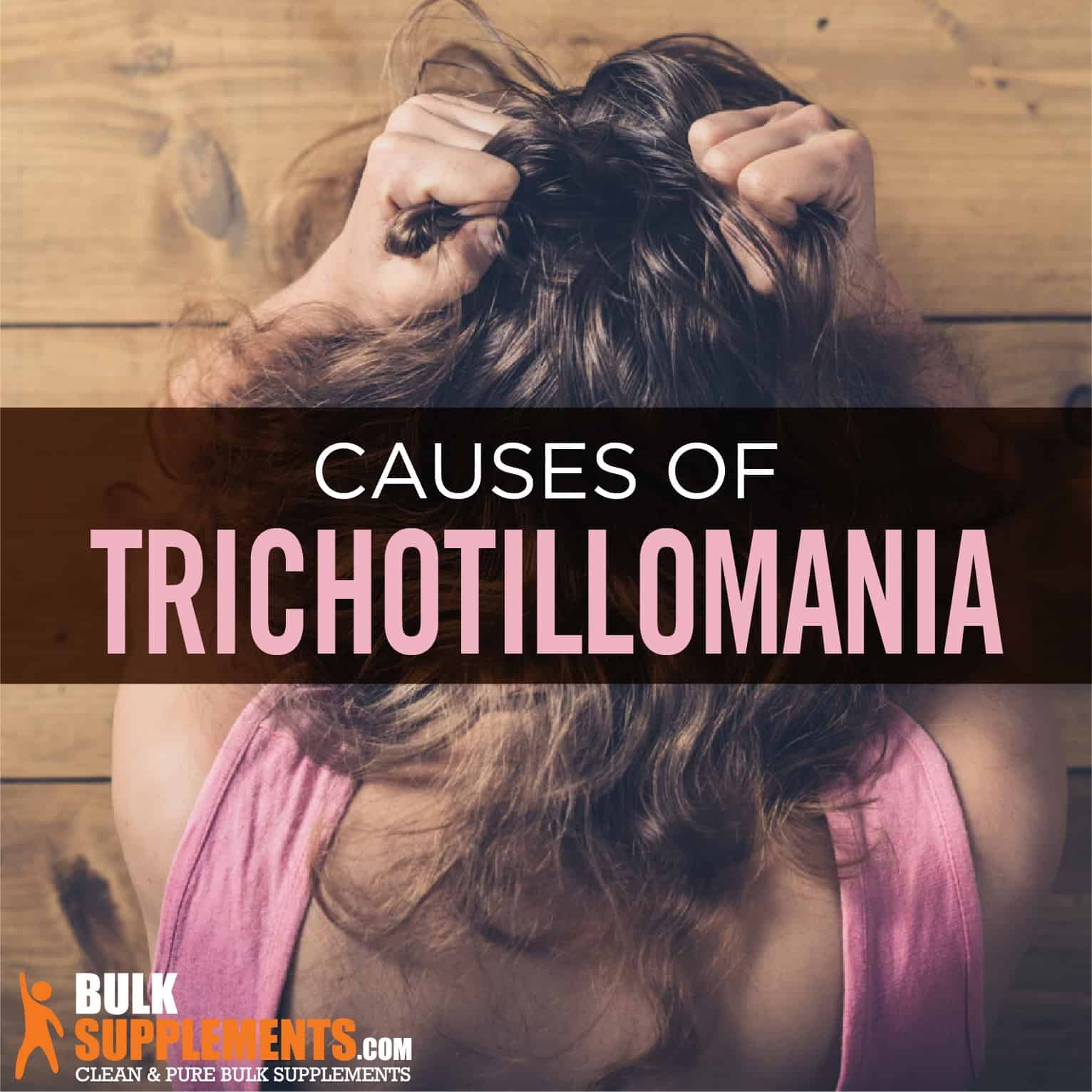 Trichotillomania is a mental health disorder that involves one experiencing an irresistible urge to pull their hair from various parts of their body. It is also referred to as to the hair-pulling disorder. This often leaves the person with bald spots and patches, causing depression and distress and could also affect their social, personal and professional life. It is also categorized as an impulse control disorder and is considered along the same lines as kleptomania or pyromania (x).

Some people experience a mild form of trichotillomania, which is manageable, while others have a more severe form where the urge to pull out their hair cannot be contained. There are several treatments to deal with this. Some treatments have helped the patients to reduce this activity and even stop it altogether (x).

The most common regions of hair pulling include the scalp, eyelids and the eyebrows. This occurs more in females than in males. While it is a chronic condition, one can combat it with proper medication and treatment (x).

Many people experience different symptoms while suffering from trichotillomania. Some are quite common, such as hair-pulling and bald patches while others depend on any underlying conditions that could act as a trigger.

Those suffering from this disorder experience an intense urge to pull their hair out. They experience increasing tension until they do. Once done, they relax. One may pull their hair in an attempt to deal with a stressful situation. Or, in some cases, it could be done without realizing. While most people pull out hair from their scalp, some do it from their eyelashes, genital areas, eyebrows or moustache. They also experience a sense of pleasure and gratification while pulling out hair (x).

Bald patches on the head could be un-uniform. It could be seen more on one side of the scalp than the other. Trichotillomania usually causes one to feel shame or have low self-esteem, especially considering bald patches and other symptoms. It is also common for those suffering from this disorder to keep the condition to themselves. Besides bald spots on the head, missing eyelashes, patches on the eyebrows and missing hair on other parts of the body could also be symptoms. Trichotillomaniac eyelashes need to be taken care of as well (x, x).

Trichotillomania tends to cause great distress to the patients and could potentially affect their social, occupational and other functioning. Distress could include shame, loss of control, awkwardness and a feeling of humiliation. It could lead to avoiding school, work or other social gatherings (x).

Hair pulling could lead the person to experience different emotions, from excitement to depression. The individuals could also pull only certain types of hair or in a particular manner, or at a specific time. They could then examine the pulled hair in different ways. Some manners include pulling the hair with their teeth, rolling it between their fingers or, in more extreme cases, swallowing the hair. As always, they tend to feel relaxed after doing this (x, x).

Consuming hair continually over a period of time could lead to a large hairball in your digestive track. It could lead to vomiting, weight loss, intestinal obstruction and, in severe cases, death (x).

Besides the symptoms mentioned above, there are also others, such as the tendency to play with hair, chew nails and bite lips. Other symptoms include pulling hair from dolls, blankets and even pets. In most cases, individuals try to hide their condition and become more closed-off (x, x).

Trichotillomania can occur for a variety of reasons, including:

Disruption in the Body System

It is possible that this disorder could stem from a disruption to the body system regarding the chemical messengers of the nerve cells. It could also be due to genetic reasons, stress beyond handling or triggered due to other illnesses. Trichotillomania could even be caused due to changes in hormone levels during puberty (x, x, x).

Depression is also considered to be a common cause of trichotillomania. It could also lead to other repetitive behaviors around one’s body, such as thumb sucking, nail-biting and scratching. This disorder could also be seen as self-harm technique and a way to seek relief from emotional issues (x, x).

Genetics and age can play a role in causing this disorder. The individuals affected by trichotillomania could have had close relatives who suffered from the same. This disorder is also said to develop during the early teen years, usually between the ages of 10 to 13. In most cases, it is a chronic condition and can usually be treated. It is also seen at times in infants (x, x).

OCD and Other Disorders

Trichotillomania is triggered by stressful situations. While men are also known to experience this disorder, women are more likely to suffer from this. During childhood, both males and females can be equally impacted. It can also be considered to be a kind of addiction since the urge increases as the individual continues pulling hair (x, x).

Trichotillomania can be treated by different methods. While there has not been much research on treating this disorder, it is believed that the below-mentioned treatments can help.

Trichotillomania treatments usually include therapy and medication. These can help a great deal, especially when used in combination with each other.

Regarding behavioral therapy, individuals would be taught how to follow a structured method to follow the symptoms and the corresponding behavioral changes. This could help deal with compulsive disorders and assist the person to reverse the changes in their behavior — in this case, stop pulling body hair (x).

There are different types of therapies that could be useful for treating trichotillomania.

This is the main treatment usually used to treat trichotillomania. The individuals would learn to recognize situations where they are most likely to pull their hair. They would then be taught how to replace it with other behavior. For instance, one could make your hands into a fist. Patients could also keep a diary noting their urges and times. Understanding the triggers will allow the individual to avoid situations causing them (x).

This type of therapy can help recognize and observe distorted beliefs that could be affecting the hair-pulling disorder (x).

This therapy helps the individual accept the urges and their condition without having them resort to hair pulling (x).

While medicines are known to help those suffering, it is mostly a temporary solution. This is because the symptoms are more than likely to make a comeback if the medications are stopped. Unless behavioral therapy is part of the treatment, an individual might not be fully cured. Medicines help reduce obsessive-compulsive symptoms while therapy assists in making a full recovery. This is one of the reasons why it is best to allow both methods to go hand in hand (x).

Antidepressants, atypical antipsychotics and other medicines work to reduce the symptoms, allowing the person to function better. They would also be able to deal with this disorder in a more efficient manner (x).

As always, consuming certain supplements, maintaining a diet and following remedies will help deal with the condition better. Some of the supplements are as follows:

Beside the dietary supplements mentioned above, there are other options as well that can help those suffering from trichotillomania. It is recommended that you don’t consume multiple supplements as that can raise the level of toxicity in your body and can reduce your energy levels (x).

Consuming melatonin tablets can help the body by keeping the person in a good mood by producing serotonin. Do note that it is not advisable to consume melatonin powder if you are already taking blood thinners (x).

Research suggests that milk thistle is a better treatment in children and adults than placebo. Milk thistle extract powder is safe for consumption by children as well. Trichotillomania in children is also quite common, although it is mild and is not chronic (x, x).

L-Theanine calms the brain, relaxing the person frantically trying to pull their hair. L-Theanine a prime component of green tea and may calm down a person within an hour (x).

Potassium supplements help deal with trichotillomania. However, it is recommended that the potassium aspartate powder dosage is strictly monitored as overdose can be extremely dangerous (x).

Using a stress ball or something similar to occupy your hands until the urge passes is a common technique. If you don’t have a ball or something else handy, ball your fists and tighten your arms so that you don’t give in to the urge of pulling hair. Fidget toys can also be a useful diversion, especially when dealing with hair pulling in toddlers (x, x).

Another idea is to wear a beanie or a bandana so as to keep your hair away from the reach of your hands. You could also come up with a phrase that you can repeat to yourself until the urge passes. Having a calming cup of tea or a long bath can also divert your mind and relax the body (x).

Trichotillomania is a health disorder that involves intense urges to pull body hair. It can result in the individual having bald spots. It could also lead to depression and additional stress and could have a great impact on their social life. Trichotillomania is categorized as a compulsive behavior disorder (x).

Some symptoms of this disorder include mood swings, bald patches, distress, digestive trouble and more. It could be caused due to excess stress, OCD, hormone changes, genetic reasons or depression. Trichotillomania and OCD don’t go well together, which is why treatment is important.

A combination of therapy and medication works best to treat trichotillomania. Consuming certain supplements like milk thistle, vitamin A, zinc and iron can help with the symptoms.