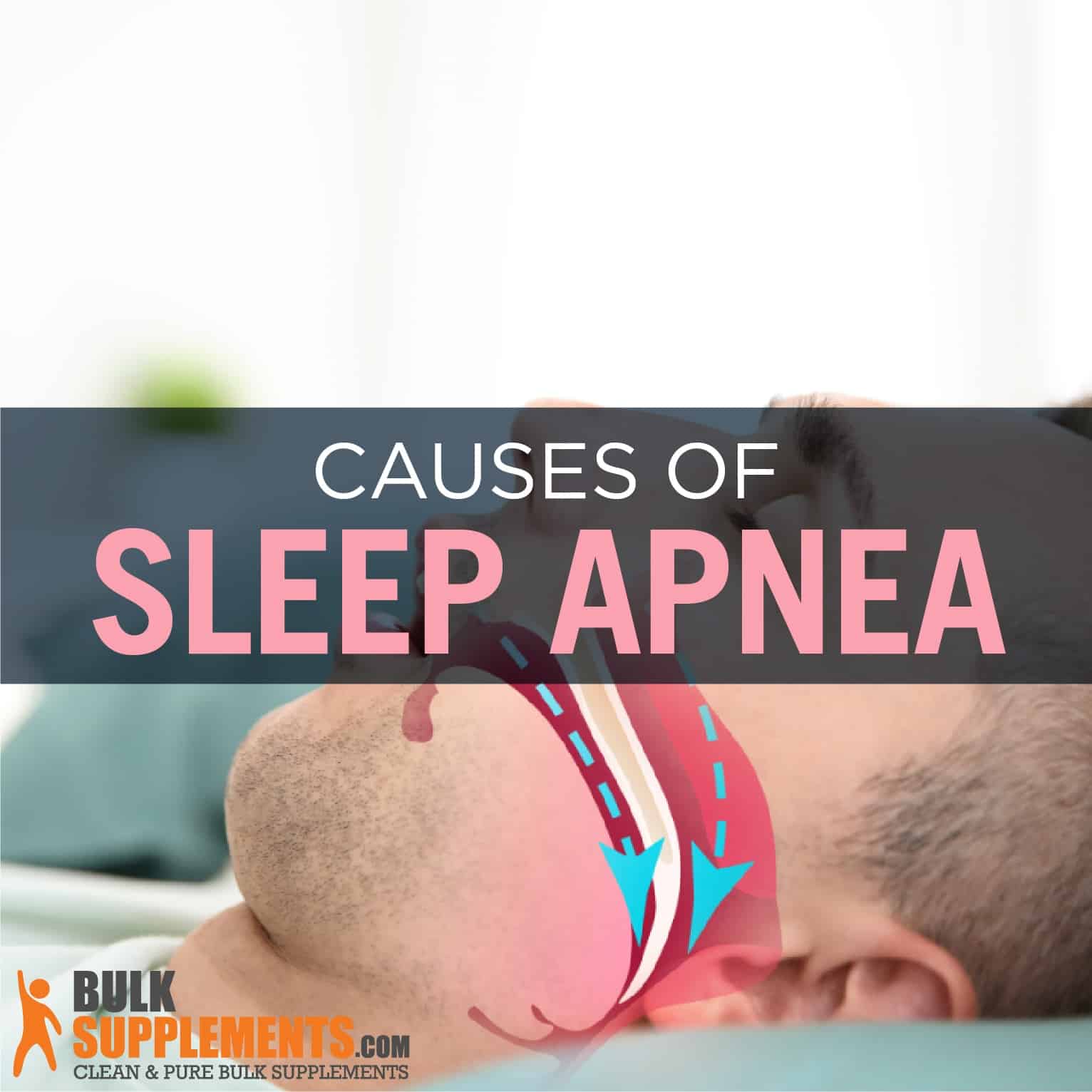 What is Sleep Apnea?

Everyone loves a good night’s sleep. Unfortunately, millions of people suffer from sleep apnea – a potentially dangerous condition that describes disordered breathing while asleep (x). Sleep apnea doesn’t only affect the people who have it. The loud snoring that usually accompanies the condition also takes a toll on their partners’ sleep.

This condition falls into two categories — obstructive sleep apnea (OSA) and central sleep apnea (CSA). With OSA, soft tissue found in the throat and nasal passages relax and collapse onto the airway, preventing air from getting in and out properly. CSA occurs as the result of faulty signals from the brain that regulate breathing while asleep (x). About 80% of cases involve the obstructive type (x).

Most of the time, those with this condition aren’t even aware of it. They may, however, deal with other seemingly unrelated health problems like high blood pressure, diabetes, or difficulty concentrating that they wouldn’t have associated with a sleep disorder. Children with sleep apnea may even experience learning disabilities (x).

Since sleep apnea is believed to be so common, so under-diagnosed, and can cause many secondary health problems including a shorter lifespan, it’s worth reading up on (x). The good news is that many types of treatments are available and even making simple changes to your lifestyle can go a long way in improving the condition.

Loud snoring is one of the hallmark signs of sleep apnea. However, snoring doesn’t always indicate apnea, and those with apnea don’t always snore (x). Other symptoms that might signal sleep apnea include (x):

These symptoms apply to both forms of sleep apnea. However, with CSA caused by underlying neurological issues, people might also notice difficulty swallowing, changes in their voice, and an overall sense of weakness and/or numbness (x).

In addition, rather than the “start and stop” pattern of breathing commonly observed with obstructive apnea, those with CSA may instead have episodes of shallow breathing followed by deep overbreathing (x).

While more common in older, heavier men, people of all ages and genders can develop sleep apnea (x). Symptoms of OSA and CSA tend to overlap but the underlying causes and risk factors differ between the two types.

Obstructive sleep apnea occurs when the airways become blocked during sleep. The blockage is usually soft tissues within the airway that become too relaxed, preventing the airway from staying open.

The risk of developing OSA increases over the age of 40 since we tend to lose muscle tone near the airways as we get older. Obesity also plays a big role but not everyone with sleep apnea is overweight.

Risk factors for OSA include (x):

Central sleep apnea, on the other hand, can be caused by a variety of factors including the presence of other serious illnesses or brain injury. Some conditions that have been known to lead to CSA are (x):

If most people don’t even realize they have sleep apnea, what’s the big deal? Well, it turns out that sleep apnea can lead to a lot of chronic diseases. For one thing, vital organs become oxygen-deprived which can be damaging. In addition, low oxygen levels trigger a stress response from the brain to stimulate breathing which raises blood pressure and cortisol. In turn, this stress response contributes to chronic inflammation which is implicated in many diseases. According to the National Heart, Blood and Lung Institute, sleep apnea increases the risk for (x):

If you suspect you might have sleep apnea, your doctor can refer you to a sleep specialist for further evaluation. Testing for the condition may require an overnight stay in a sleep center where your sleeping, breathing patterns, oxygen levels and brain function will be observed overnight. Some tests can be conducted in the comfort of your own home, but this option isn’t useful in all cases (x). If diagnosed with sleep apnea, many treatment options are available and can often be used in combination.

CPAP stands for “continuous positive airway pressure”. A CPAP pumps oxygenated air through a mask while a person sleeps. This ensures a continuous supply of oxygen to the body. It doesn’t change a person’s breathing pattern while sleeping but is considered a very effective way to manage sleep apnea so long as its used properly and consistently (x).

Several lifestyle factors contribute to the development of sleep apnea. Therefore, changing some behaviors can make a real improvement in sleep quality. Doctors recommend that people with sleep apnea (x):

Some people benefit from oral devices, or mouthpieces, that keep the position of the jaw or tongue in place while a person sleeps (x). Since the structure of everyone’s mouth is unique, specialized dentists custom make them. Oral appliances may work best for people who can’t tolerate a CPAP machine and who suffer from mild to moderate OSA (x).

Finding the right combination of treatments for sleep apnea often requires some trial and error. In some cases, when CPAPs, lifestyle, and mouthpieces don’t work well enough, surgical options may be an appropriate next step.

The most common type of surgery for sleep apnea removes the excess soft tissue in the throat that can obstruct breathing during sleep such as the uvula and tonsils. If blocked nasal passages get in the way of proper breathing, nasal surgery is performed to correct the structure of the airways or remove problematic tissue. In addition, both the size and the position of the tongue can be adjusted through surgery (x).

Another type of surgical procedure places implants into the soft palate muscles or tongue. When the implant senses irregular breathing patterns, it stimulates the nerves within the tissue (x).

Since the structure of the jaw impacts nocturnal breathing, a rarely performed but effective surgery for sleep apnea can reposition the lower part of the jaw. This surgery requires skill and precision on the part of the surgeon and recovery can be painful. Because of these factors, combined with the risk of complications, people usually opt for other less invasive treatments (x).

Finally, in the most severe cases, some doctors will perform a surgery called a tracheostomy. This creates a hole in the neck that delivers air directly to the lungs (x).

Since sleep apnea can cause havoc on your body and your energy levels, standard treatment remains important. However, some supplements can promote rest or assist with reducing some of the risk factors for sleep apnea such as excess weight. They can also support the body by helping to minimize the complications of sleep apnea such as heart disease and diabetes. As always, check with your doctor before using supplements if you have medical issues of take any medication.

While you’ve probably seen it as a tea, the chamomile flower can also be taken as a powdered extract. Chamomile essential oil is also popular for inhalation through a diffuser or used topically with a carrier oil. However it’s used, chamomile promotes relaxation and a more satisfying sleep, can lower inflammation, and lower blood pressure (x). It can even help reduce stuffiness caused by nasal polyps (x). As a dietary supplement, take 800 mg of chamomile extract powder once or twice daily with water, or as directed by a physician.

L-Theanine amino acid is found in tea and exerts a balancing effect on certain neurotransmitters. The result is better rest at night and improved focus and concentration during the day. L-theanine can also tackle other issues associated with sleep apnea. For example, it can lower inflammation and blood pressure, promote weight loss, keep sinuses clear, and even possibly help protect against cancer (x). As a dietary supplement, take 100mg to 250mg one to three times daily.

People with sleep apnea may find themselves dealing with inflammation and cardiovascular problems. While fish oil has many uses, supporting the cardiovascular system has become it’s claim to fame. It can improve cholesterol, blood pressure, and circulation. Fish oil also reduces pain and inflammation of arthritis and can help the body shed fat while retaining muscle (x). Suggested serving size for fish oil softgels is 2 capsules, which should be taken anywhere from two to three times per day.

You know a vitamin is important when doctors routinely test for it. Studies show that vitamin D supports overall health and well-being in so many ways. Getting adequate amounts of this “prohormone” helps maintain strong bones and lowers inflammation. The immune system also depends on vitamin D to fight things like colds, flus, and also cancer. Too much vitamin D can be dangerous, though, so check with your doctor if necessary to learn how much is appropriate for your body. People with kidney problems should not take it without consulting their doctor.

Even though sleep apnea is common and largely goes unrecognized (unless you sleep next to someone who has it!), it can lead to very detrimental health outcomes. The brain, cardiovascular system, metabolism, and immune system all bear the brunt of this breathing disorder. Many types of treatments can help, the most popular of which is currently the CPAP. Making some changes to daily habits such as diet, exercise and not smoking can also be a big help.