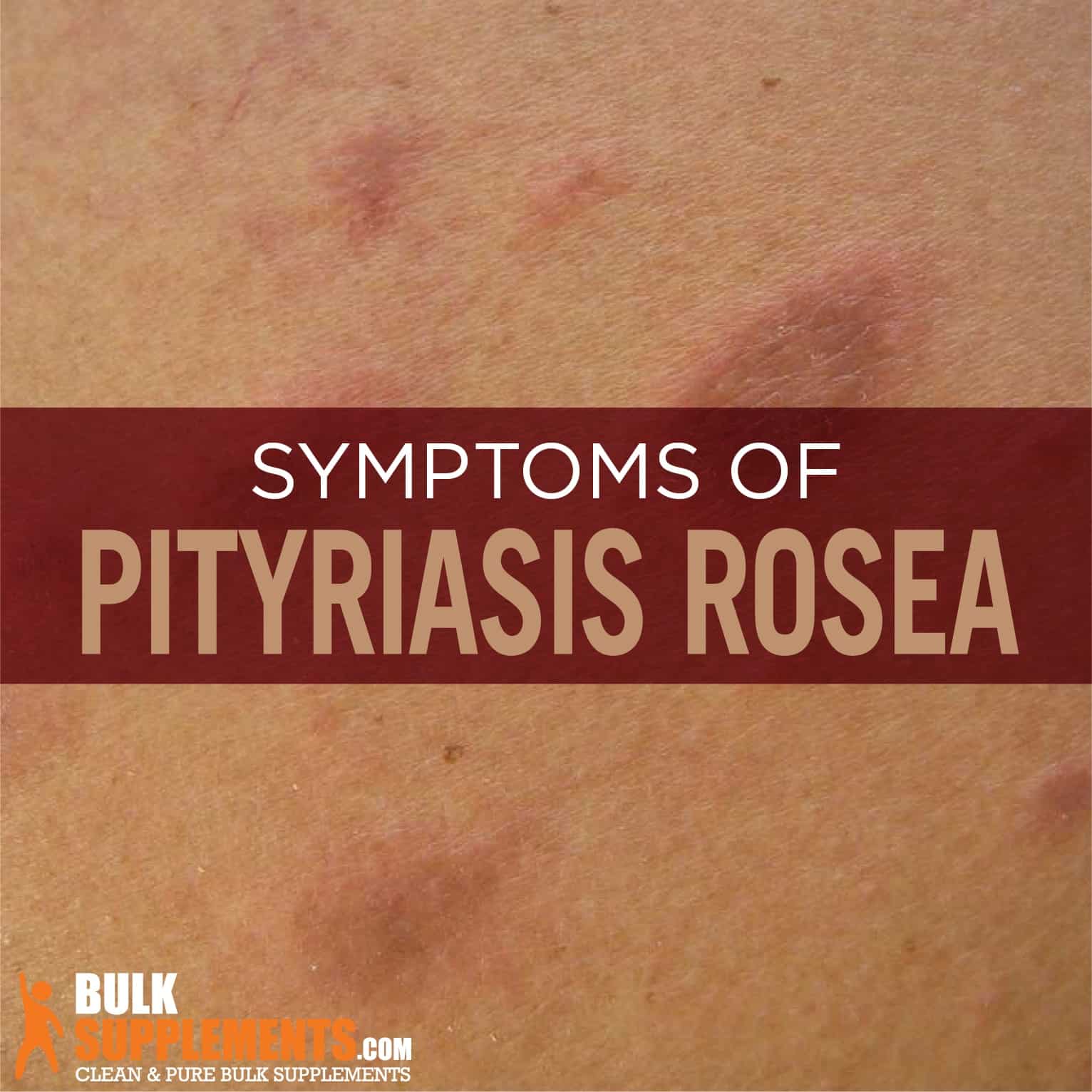 What is Pityriasis Rosea?

Skin rashes are common and can be caused by any number of things like a reaction, allergies or infections. Pityriasis rosea, also called the “Christmas tree rash”, is a skin eruption that takes the form of an oval or tree-shaped scaly rash that can pop up on various parts of the body. This condition is prevalent and can affect just about anyone regardless of gender, age, and background. It is, however, more likely to occur among pregnant women and people between the ages of 10 and 35 (x).

Pityriasis rosea is usually not something to worry about. It may cause some discomfort like itching or unsightly redness on the face, but the good news is that it tends to go away on its own within a few months and rarely ever comes back (x).

The underlying cause of pityriasis rosea still remains unclear, but it’s becoming increasingly evident that a common virus plays a role (x). As a result, supplements that keep the skin and immune system healthy can provide protective benefits. If a bout of pityriasis rosea is unavoidable, home remedies and over-the-counter solutions can soothe the skin and speed healing time.

Medical professionals such as dermatologists can usually diagnose pityriasis rosea easily but occasionally the rash can be confused with other skin conditions like eczema or psoriasis. Sometimes a biopsy is needed to confirm the type of rash. Generally, though, a detailed medical history and visual examination is enough to accurately identify it (x). Signs that indicate pityriasis rosea include:

At first, people usually develop what’s known as a “herald” or “mother” patch. It’s a scaly patch that forms the back, stomach or chest. Depending on skin color, they can appear pink, red, grey, purple or brown. Patches on the back could go undetected before the more widespread rash appears on skin a few weeks later. Herald patches look slightly raised and measure between 2-4 inches in size, having a similar appearance to ringworm (x).

The emergence of the “daughter” patches: after about two weeks (although sometimes only after a few days), more patches begin to show up on the skin. These are smaller and could appear on the legs, back, chest, abdomen, and arms. They could also develop on the face, the neck and other parts of the skin. Sometimes, even the inside of the mouth is affected. When multiple patches appear, they may take the form of a Christmas tree.

In 80 percent of cases pityriasis rosea rashes usually last anywhere from 1-3 months. They can linger up to 5 months in some people, though. Eventually, the condition goes away without treatment and it usually does not leave any scars or permanent marks. However, some people may see residual dark spots at the inflammation sites which could last for months before resolution (x).

In about half of the cases, people find that their rashes cause pruritus (itchy skin) (x).

Despite the fact that pityriasis rosea has been a recognized condition since 1860, researchers still aren’t quite sure what causes it. Many believe a common but unidentified virus triggers it (x).

Evidence increasingly backs up this theory. First, most people feel like they’ve come down with something before or during the development of the rashes. Second, it’s rare for someone to get pityriasis rosea more than once, suggesting the body has built up immunity to the infection. Finally, while the rashes themselves aren’t contagious, people in the same family or who spend time together may experience it around the same time (x).

Recent research points to 2 herpes viruses, HHV-6 and HHV-7, as potential causes of the condition (x).

Pityriasis rosea most commonly affects people between the ages of 10 and 35. It is theorized that this is the age range when people are most likely to become infected with the mystery virus (x).

Pregnant women are also at a greater risk because pregnancy lowers immune system activity and makes them more susceptible to infections. Unfortunately, it can increase the chances of miscarriage, especially if it develops within the first 15 weeks of gestation (x).

Initially, pityriasis rosea can be confused with psoriasis, an autoimmune condition that also leaves patches on the skin. Psoriasis can develop at any age but people are more likely to have their first psoriatic flare up between the ages of 15 and 35, similar to pityriasis rosea. The two conditions are very different, however.

While pityriasis rosea most likely occurs in response to infection from an outside pathogen like a virus, psoriasis is an autoimmune condition. This means that the immune system mistakingly attacks cells of its own host body, in this case the cells of the skin.

About 30 percent of people who have psoriasis will go on to experience psoriatic arthritis, a related condition that causes joint pain, stiffness, and loss of mobility. In addition, both psoriasis and psoriatic arthritis are associated with comorbidities (other conditions that occur at the same time) such as diabetes, cancer, cardiovascular disease, kidney problems, and depression.

Pityriasis goes away on its own, leaving no evidence. Psoriasis, on the other hand, can be managed but never cured (x).

Pityriasis rosea usually goes away on its own without treatment. In severe cases, studies show that the use of the antiviral medication acyclovir can be helpful (x). A doctor might also decide to treat a pregnant woman with acyclovir if the risks of the condition (possible miscarriage) outweigh those of the medication (x). Usually, though, people just treat the symptoms of itching or skin irritation as needed with any of the following remedies:

Soaking in an oatmeal bath can soothe irritated skin and relieve itch thanks to the avenanthramides found in oats. You can use an oatmeal bath product found in a drugstore or simply do it yourself by placing a cup of oats into a mesh bag and adding it to the bathwater. Hot water can actually make the rash look and feel worse, however, so be sure the water is lukewarm (x, x).

These are creams, lotions or sprays that moisturize and soothe the skin. Certain emollients could be used instead of soap since soap could irritate the rash. They can be purchased over the counter from most drugstores (x).

Examples of these include betamethasone cream and hydrocortisone which help reduce swelling and itching. They can be purchased over-the-counter or a doctor can prescribe a stronger one if needed (x).

For people who suffer from insomnia because of the incessant itching, oral antihistamines such as Benadryl (diphenhydramine) reduce itch and help with sleep (x).

UVB light therapy or more exposure to natural sunlight can help speed healing and ease the itch in some people, especially when other treatments don’t work (x).

Pityriasis rosea can look a lot like a rash that’s caused by a fungus like ringworm or candida. As a result, people may try to treat their rashes with anti-fungal products which can actually make pityriasis rosea worse. If you’re unsure what’s causing the rash, see a dermatologist for proper diagnosis (x).

A well-functioning immune system and healthy skin provide the best defense against complications from pityriasis rosea. Supplements can help with this. One amino acid in particular — lysine — may have a direct impact on the virus thought to play a role in the infection.

Studies show that the amino acid lysine helps reduce the effects of herpes viruses by stopping them from replicating in the body. Researchers believe that pityriasis rosea is likely caused by herpes viruses, specifically HHV-6 and HHV-7. In case studies, lysine helped the condition clear up faster (x). As a dietary supplement, take 680mg of L-lysine HCL once or twice daily, or as directed by physician.

Vitamin C multitasks. Production of collagen and elastin, two proteins that keep the skin supple and healthy, require vitamin C. In addition, the immune system depends on vitamin C to make the white blood cells that combat infection (x). As a dietary supplement, take 1,000mg (1/4 tsp) of vitamin C powder up to three times daily or as directed by a physician.

Vitamin E helps keep the skin healthy and moisturized. In fact, a deficiency in this fat-soluble vitamin is linked to very dry skin which leaves it susceptible to infections and damage (x). Some studies show that taking 400 IU of vitamin E daily can help improve the quality of life for people who suffer from skin rashes (x). As a dietary supplement, take 1 vitamin E 400 IU softgel daily with a meal, or as otherwise directed by a physician.

Zinc, while needed by the body in small amounts, plays a critical role in the function of the immune system. This mineral is especially effective for fighting viruses including those in the herpes family which are suspected to cause pityriasis rosea. What’s more, zinc is heavily concentrated in the skin and helps heal it when wounded (x). As important as zinc is, more is not necessarily better. Too much can be toxic. Zinc supplements come in many different forms such as zinc citrate powder, zinc gluconate powder, and zinc glycinate powder so it’s important to carefully read labels and not exceed what’s recommended.

Pityriasis rosea is relatively harmless and temporary skin condition that is likely triggered in response to a virus. Rashy patches gradually develop on the skin, usually on the back, trunk, and chest. Once a person experiences this condition, he or she is unlikely to get it again.

Pregnant women, a population at higher risk of developing pityriasis rosea, may want to make an effort to seek medical attention if they suspect they have it. Even though the condition doesn’t leave lasting effects for most people, it can cause problems during pregnancy.

Luckily, not much needs to be done to treat pityriasis rosea. It generally goes away on its own within a few months and leaves no lasting scars. However, these rashes can get uncomfortable. If this occurs, over-the-counter creams, oral antihistamines, and oatmeal baths (but not too hot!) can soothe skin and relieve itchiness. In addition, keeping both the skin and immune system in good shape through proper nutrition and/or supplements helps combat the virus that causes it and helps ensure proper healing.