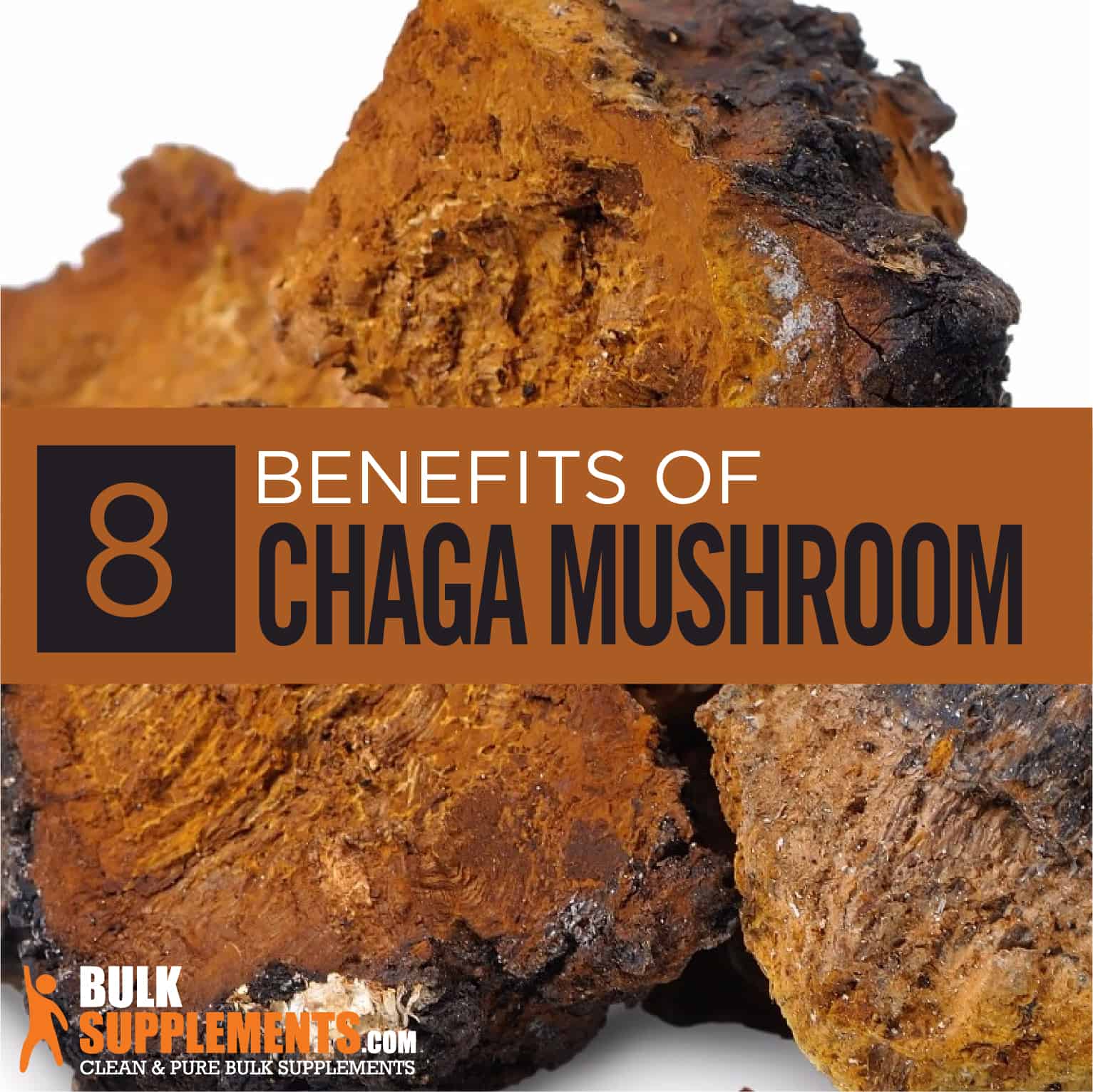 What is Chaga Mushroom Extract?

Resembling a lumpy piece of burnt charcoal, the chaga mushroom (Inonotus obliquus) is a super fungus that may reduce oxidative stress, protect DNA and the immune system. It may even prevent cancer.

Chaga comes from the Russian word for mushrooms. In some areas, people call it “black gold.” The chaga mushroom has been used in Russia and Northern Europe for centuries as a traditional medicine to treat chronic conditions such as diabetes, stomach cancer and heart disease (x).

These mushrooms cannot be eaten raw. Before they’re ready for human consumption, their tough exteriors must be broken down with alcohol and hot water. Chaga mushroom teas and coffees have become popular in recent years and were used during World Wars I and II as an alternative to coffee.

So how can this mushroom benefit your health?

Chaga mushrooms have one of the highest ORAC (oxygen radical absorbance capacity) scores of any food. The higher a food’s ORAC score, the more likely that food is to help protect your body from damaging free radicals, which cause a host of diseases such as Parkinson’s disease, cataracts, Alzheimer’s disease, heart disease, diabetes and cancer (x). Increasing your antioxidant intake is a great way to reduce oxidative stress on your body and keep detrimental health issues at bay.

A study published in the World Journal of Gastroenterology showed the chaga mushroom’s potential to prevent and treat liver cancer by inhibiting cell growth (x). Research performed on tumor-bearing mice in 2016 showed their tumors shrunk by as much as 60 percent when treated with chaga mushroom extract (x).

In 2009, a study found that triterpenes, compounds found in chaga mushrooms and some other mushrooms, caused tumor cells to die (x). However, unlike other cancer treatments, chaga doesn’t seem to damage healthy cells (x). Of course, researchers need to do more work before they can make concrete inferences about the mushrooms and cancer prevention. Ironically, some call them a “tree cancer” because they ultimately kill the trees they grow on.

In 2015, a study showed that lab mice were able to exercise longer after given chaga mushrooms. Glycogen in their muscles increased after dosage. Researchers haven’t done human research yet, so they’ve been unable to draw concrete conclusions about the chaga’s efficacy on physical endurance in people (x).

In animal studies, chaga mushroom extract had an anti-inflammatory effect in the tested animals’ colons. Researchers believed chaga extract hindered the chemical mediators of inflammation. These findings offer new hope that, in the future, they may have the same effect on human test subjects (x).

Another recent study found that chaga mushroom extract had an antiviral effect on HIV-1 (human immunodeficiency virus type 1). And another animal study showed that chaga mushroom extract reduced infective properties of the hepatitis C virus (x, x). Studies continue, and researchers will need to do tests on people first. However, it looks like the mushroom is a worthy candidate for new antiviral drugs.

Bioactive polysaccharides, found in mushrooms, act as prebiotics in the digestive system and improve digestive health in numerous ways. Findings in animal studies showed they reduced cholesterol, triglycerides, body weight and blood-glucose levels in diabetic mice. They also seemed to have a profound biochemical effect on improving insulin sensitivity (x).

Those with diabetes may want to consider adding it to their diet. In one study, diabetic mice saw a 31-percent reduction in blood sugar after three weeks (x). Still, human research is necessary to determine the chaga mushroom’s true impact on one’s blood sugar levels.

The most common place to find this powerhouse of benefits is in chaga mushroom tea and coffee. Mushroom coffee is popular because it’s less acidic than regular coffee and has only half the caffeine. It’s more likely to be forgiving on your insomnia.

Adding mushrooms to beverages is an easy way to get their many benefits. Several companies offer powdered mixtures of mushroom extracts and instant coffees, so all you need is hot water to make a mug of mushroom java (x).

Chaga Mushroom Side Effects and Dosage

Although chaga mushrooms are full of super nutrients and antioxidants, they also contain a lot of calories, fat, carbohydrates and sugar (5 grams per teaspoon). If you’re trying to lose weight, take this into account before adding them to your diet.

Scientists and dieticians haven’t tested chaga mushrooms for side effects, so there are no clinical trials to refer to. However, there is a reported case of adverse effects from it. A 72-year-old Japanese woman with liver cancer reportedly developed kidney damage after consuming chaga for six months (x).

Because chaga mushrooms stimulate the immune system, some doctors advise patients with autoimmune diseases to stay away from them. It’s possible that they interfere with medications for these diseases. This warning is also true for blood-clot disorders, since chaga can hinder proper blood clotting. Pregnant or breastfeeding women should avoid consuming them altogether, since they haven’t been studied for adverse side effects.

Talk to your doctor before adding chaga mushrooms to your diet. If your doctor approves it, he or she should give you instructions on a safe daily dosage. If you notice any side effects, write them down and discuss them with your doctor. Don’t take any other supplements unless your doctor gives the okay.

Chaga mushrooms can cause allergic reactions in some people. Changes in heart rate, breathing difficulty and losing consciousness are medical emergencies and symptoms of an allergic reaction. If you notice any of these symptoms, seek emergency help immediately.

People have used chaga mushrooms medicinally for centuries. Though clinical research is limited, chaga appears to have a bevvy of helpful benefits. Of course, before adding this supplement to your regimen, be sure to speak with a doctor for the optimal dosage.