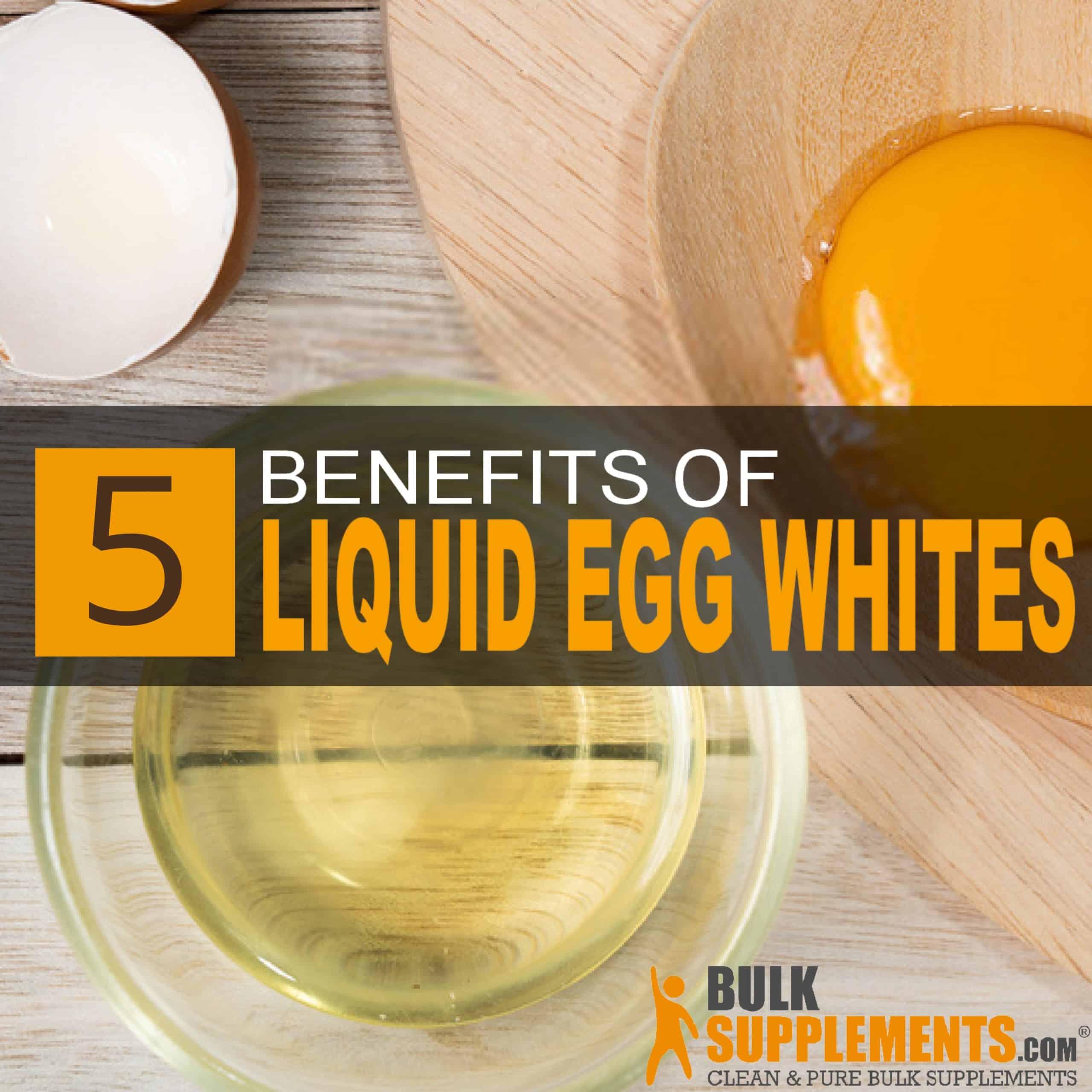 Everyone knows that eggs are a classic breakfast food with lots of protein and yummy cooking and baking possibilities. It might surprise some people to know that egg whites–often touted as the healthiest part of the egg–actually comes by itself in multiple-size cartons.  Not to mention all the ways in which it can be prepared, whether on the stove or the microwave.

What are Liquid Egg Whites?

As the name implies, liquid egg whites are literally egg whites in liquid form.  While the yolk of an egg is high in lipids or fats, the white contains more than half of the egg’s total protein.  It’s also at least 90% water, so it contains far fewer calories than a whole egg.  Luckily, most brands don’t add extra ingredients to the egg white product.  These will typically be refrigerated and contain no artificial flavors or preservatives.

You’ll notice that the texture of liquid egg whites is different from a regular egg white.  This is due to the liquid egg whites having been pasteurized.  This takes place during manufacturing when the egg whites are treated with mild heat to eliminate certain pathogens.  It doesn’t change the overall nutrition of the egg whites, but they’re not as easy to whip or make frothy, like eggs from home.  In addition, pasteurizing the egg makes it safe to enjoy uncooked and no protein content is lost.

One of the main benefits of organic liquid egg whites is convenience.  Rather than having to sift through a single egg to get just the whites, the whites are readily available in a carton.  They can readily be added to an omelet, or even be frothed up to add to the top of a special drink.  Plus, it saves you the problem of wasting the egg yolks if you’re not going to use them.

Supposedly, consuming liquid egg whites is a safe alternative for people with egg allergies to get their daily protein.  Despite this claim, it’s always a good idea to check with your doctor first just to be safe.

Lots of people wonder whether egg whites can be frozen.  Most brands can be frozen and will keep for up to a year.  But they’ll keep best in this condition if they have not been opened yet (x).

Because egg whites are pasteurized, they can also be added to salads or smoothies to increase protein content and consumption.  Some sources also point to liquid egg whites being the secret to making edible cookie dough.  But when to use a whole egg or egg whites depends on what you’re making.  Egg whites are good binders for omelets or waffles, but for cakes and other complex recipes, whole eggs might be best (x).

Do keep in mind that just because egg whites contain lots of essential nutrients, there is still no great concern or problem with continuing to consume whole eggs.  The yolk may contain more micronutrients and cholesterol, but not in a great enough quantity to be concerned about.

Because liquid egg whites are high in protein, they are often added to protein shakes, or consumed on their own to help build muscle.  This works because egg whites have good bioavailability in the body, and have the greatest amount of digestible amino acids–even greater than beef, chicken, fish, or milk (x).  Bioavailability refers to the body’s ability to quickly absorb different substances into the bloodstream, and whether those substances will have an effect.

Most bodybuilders will use soy or whey protein powder to assist with their diets.  But such materials might not be the tastiest option for everyone, so egg whites are a decent alternative to those.

In addition, some studies have shown that adding eggs to meals might help increase the number of vitamins and minerals the body will absorb.  In salads, for example, adding eggs can help the body absorb more Vitamin E, as well as all the carotenoids found in vegetables (x).

Similarly, egg whites have been studied for their effects on low blood pressure.  Scientists at Clemson University recently found that egg whites contain a peptide that helps block naturally-produced enzymes that may increase blood pressure (x).  In addition, the myth of eggs containing an unhealthy amount of cholesterol has since been busted, with scientists declaring that, while eggs do contain cholesterol, it’s not enough to cause concern for cardiovascular health (x).

A few studies have compared diets that include eggs with those that don’t.  One study published in Heart looked at half a million healthy Chinese adults and found that daily egg consumption might help reduce the risk of cardiovascular disease.  Similar data shows that egg consumption may reduce the risk of stroke.  Another study, published in the American Journal of Clinical Nutrition, looked at people who ate up to twelve eggs per weel, and there was no increase in cardiovascular risk factors for people with either pre-diabetes or type 2 diabetes (x).

That’s not to say that it’s entirely safe to overconsume eggs.  Eggs are an essential part of the human diet, but consuming them in excess can contribute to weight problems.

Some anecdotal evidence has pointed to egg whites being good for the skin.  They can be stirred up, or left as is, and made into a face mask that supposedly tightens the pores and clears away blemishes.  But there isn’t much scientific evidence pointing out what exact benefits egg whites have for the skin.

While it normally does not take very long to cook a whole egg, egg whites can be cooked in the microwave.  You can add extra spices and ingredients to make them even more of a favorite.  Most recipes call for at least three egg whites, with one whole egg and a teaspoon of water.

When the eggs have been mixed, along with any meats or veggies, microwave the mix in a microwave-safe bowl for 45 seconds.  Afterward, stir the mixture, and microwave again for another 45 seconds.

The best part is how many substitution opportunities there are.  If you prefer, you can use all egg whites or all egg yolks, or even milk instead of water.  But always keep an eye on your mixture so it doesn’t bubble over the edge of your bowl (x).

Unlike the yolk of an egg, egg whites contain almost no fat or cholesterol.  As mentioned, they contain a huge chunk (4 of the 6 grams) of an egg’s protein content, while also containing fewer calories.  They also don’t contain any carbohydrates or sugar (x).  For Eggland’s Best, for example, a single 3 tablespoon serving is 25 calories, with 75 mg sodium, 75 mg potassium, and 5 g protein being the three main ingredients of its nutritional makeup (x).

Because of the protein content in egg whites, they produce blunted insulin responses and lower energy intake.  This might assist in hunger and weight management.  Several studies involving high-protein breakfasts as consumed by overweight to obese adolescents have been conducted, and the results have been associated with less evening snacking and better hormonal balances (x).

A popular way of managing weight and calorie intake is to eat 2-3 eggs per day while adding some liquid egg whites on top.  Studies have shown that eating eggs for breakfast helps reduce calorie intake, and has no huge impact on cholesterol levels (x).

Don’t worry about there being sodium in egg whites.  Sodium might have an ill reputation in health circles, but it is still needed for healthy body function, and the sodium content in a single egg is no cause for concern (x).

Although egg whites are touted as a great source of protein, people with egg allergies should not consume them.  Some sources say that most people outgrow such an allergy by age 16, but caution must still be exercised and a doctor’s advice sought out (x).

Organic liquid whites will be packaged and labeled similarly, claiming that the hens that produced the eggs have been raised cage-free, and the egg whites have no added hormones.

Liquid egg whites are not the end-all-be-all of protein sources, but they might provide some level of convenience–not to mention less waste.  For making omelets, shakes, or a frothy angel food cake batter, they might be ideal.  They are lower in calories than a whole egg (although a whole egg’s nutrition value should be not under-valued), and provide 5 grams of protein for each serving, with no fat or cholesterol. Studies have indicated their cardiovascular and muscle benefits, especially for weight and calorie intake management.