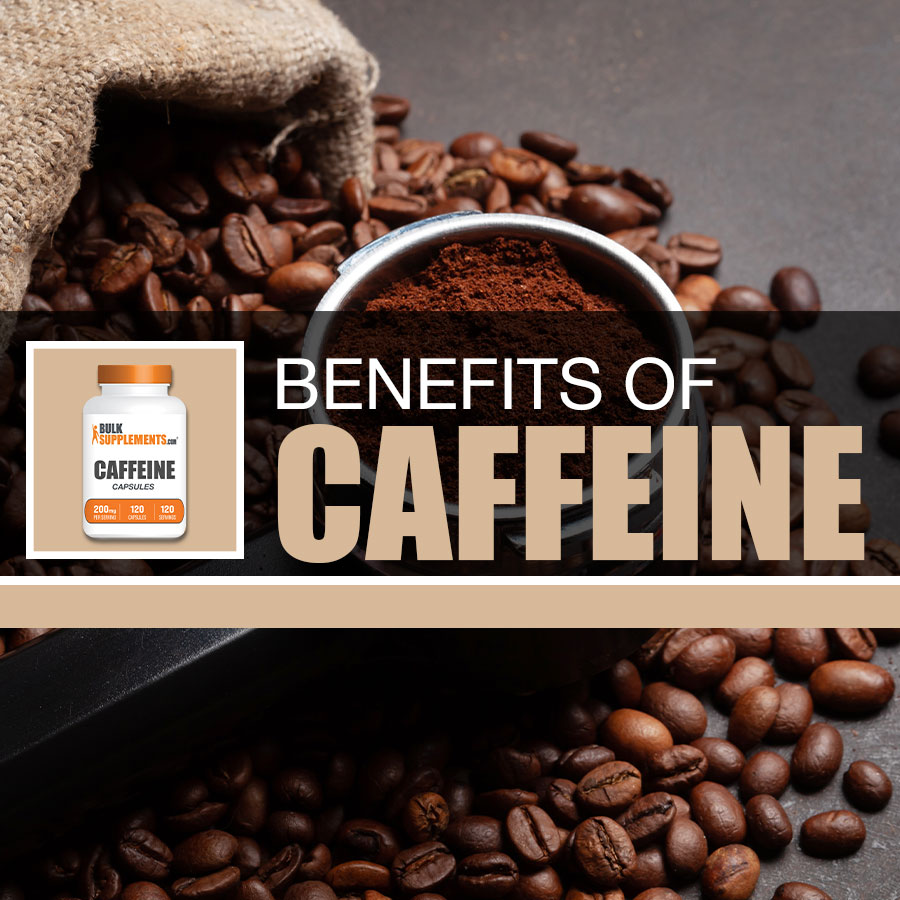 Besides powering you up as a morning ritual and keeping you alert during the day, caffeine does much more. The black brew gives you more than just a jolt of energy as a supplement. Caffeine may benefit your overall health. Many studies show that the benefits of taking caffeine out weight any potential side effects.

However, before taking any new supplement, consider talking to your physician to see if the extra supplementation is appropriate for you.

Where coffee originated from is murky, but one story seems plausible. In 850 A.D., a goat herder in Ethiopia noticed his goats acted strange at a particular berry. The goat herder tried the berry and experienced a sense of high bliss and energy. Later, the berry became known as coffee.

Eventually, perhaps 15th century, the coffee berry crossed the Red Sea to Arabia (Yemen). The cultivation of coffee beans began with local monks being the first to brew a cup of java for stimulation, so they could practice their faith, praying all night.

The stimulating drink became popular in Arabia, with coffeehouses called “qahveh khanehs” forming in their neighborhoods between the 15th and 16th centuries.

These establishments appeared in Mecca and Constantinople (Istanbul today), where scholars gathered to talk, listen to music, dance and sing, and play chess and other games. The qahveh khanehs became known as “schools of wisdom” thanks to the clientele.

Yemen remained the prime producer of coffee until the 17th century, when it spread to Indonesia and the Americans during the 18th century.

Coffee has continued to spread and remained prevalent, with most people drinking an average of three cups of joe daily.

Caffeine offers many health benefits, such as stimulating circulation, balancing urination and digestion. Let’s look more closely at the overall health benefits of the supplement. 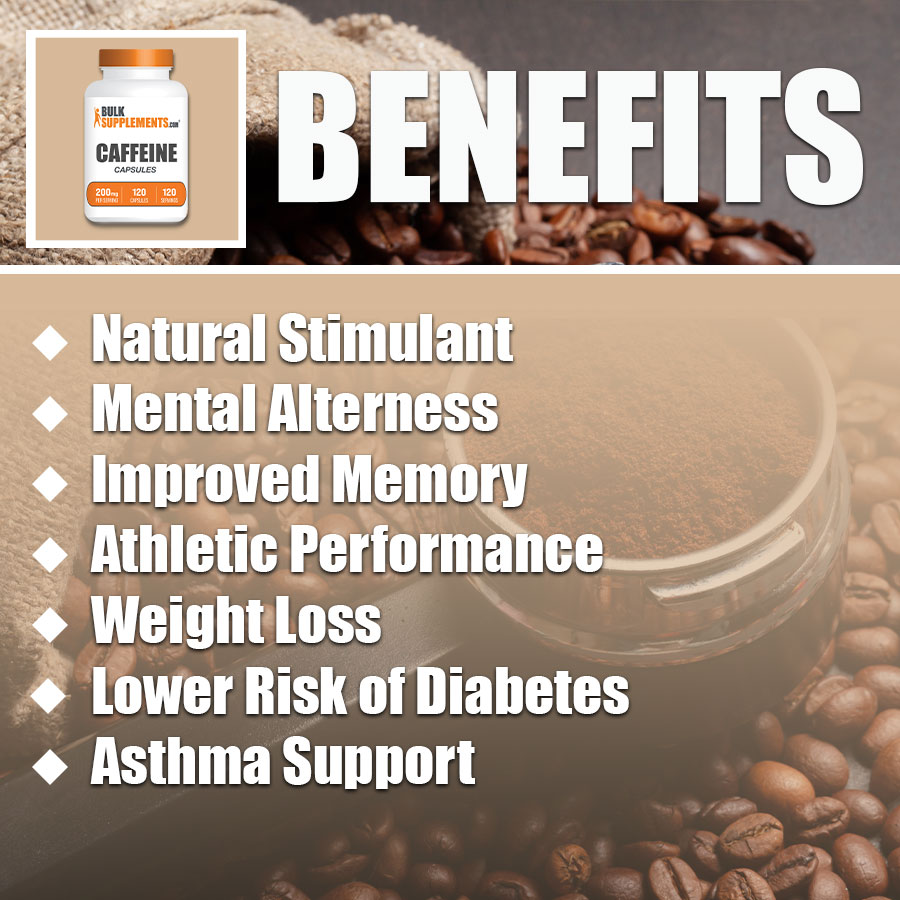 A stimulant, caffeine produces various effects on your body. Over the past few decades, numerous studies have proven the positive impact of caffeine.

Caffeine has treated multiple conditions, ranging from age-related degenerative brain conditions like Alzheimer’s and Parkinson’s diseases to viral infections like Hepatitis C. Also, a cream made with caffeine helps reduce redness and itching when applied to the skin.

An eight-ounce cup of joe has about 100-200 mg of caffeine. Research reports that 400 mg of caffeine daily is safe for most people. Yet, some people who like the stimulant can only drink it down as a sugary, loaded energy drink loaded with caffeine. A better way to get caffeine’s benefits is through supplements.

Annals of Internal Medicine published on June 17, 2008, that coffee drinking is beneficial to your health and that the caffeinated drink lowered the chances of heart disease, some types of cancer and type 2 diabetes.

Over 41 thousand men were part of the study, and a follow-up study included over 84 thousand women. All participants were cancer and heart disease free. The research found no association between caffeine and cancer deaths and no connection to heart disease.

The comprehensive study shows that drinking large amounts of coffee or taking caffeine does not increase your chances of dying sooner than expected and may actually protect your health (x).

Caffeine has low toxicity and causes no side effects in adults. So, it safely stimulates your central nervous system, made of the brain, spinal cord and nerve channels. Decades of research support using caffeine as a natural stimulant for the body, keeping performance, mood and alertness high (x). The supplement also acts as a diuretic, causing an increase in urine passing and flushing the system of toxins.

Consuming caffeine throughout the day may keep you mentally alert and focused. Studies in the 1990s show combining caffeine and glucose can enhance concentration and cognitive performance on various tasks.

In fact, caffeine boosts memory consolidation, taking memories, strengthening them and making them more permanent. Hopefully, they will do better on the tests and final exams.

The U. S. Food and Drug Administration corresponds with the analysis, saying that 80 percent of adults take caffeine daily, averaging 200 mg, one or two strong cups of coffee.

Well-trained athletes who take caffeine improve physical endurance and strength, reduce pain perception and reduce fatigue. The supplement may also cause you to feel as if you’re not working as hard during aerobic activities like running or cycling. However, consuming caffeine doesn’t seem to have the same effect during anaerobic exercises like powerlifting or sprinting.

The study based on these findings also shows that the daily caffeine intake over several weeks may lead to a tolerance to caffeine and a successive decrease in enhanced performance effects (x).

Look at the labels for weight loss pills, and you’ll notice a common ingredient — caffeine. The component suppresses your appetite and boosts your metabolism. Caffeine and a well-planned diet can reduce body fat.

A blind study on 76 overweight and moderately obese individuals consumed green tea as a mixture of a plant-based compound called catechin, commonly found in tea, as a polyphenol (antioxidant). The combination equaled 150 mg of caffeine, causing weight loss. The researchers speculated that green tea caffeine improved weight management thanks to suppressing leptin, which inhibits hunger, thermogenesis and fat oxidation (x).

Decreases the Risk of Diabetes

An 18-year Harvard University study on the effects of caffeine involved over 100,000 participants. The results proved that caffeine might have positive impacts on your body.

People have a nine percent less chance of developing diabetes if they drink one to three cups of joe daily.

In fact, with six or more cups of coffee a day, hardcore coffee drinkers lowered their risk by 54 percent in men and 30 percent in women. While caffeine reduces the risk of developing the disease, it does not appear to help treat diabetes after diagnosis (x). Review with your doctor before consuming any new dietary supplement.

As a preventive measure against gallstones, some studies support using caffeine to reduce the risk of the body developing painful gallstones.

Reportedly, middle-aged Japanese men who consumed 300 mg of caffeine or five cups of coffee a day lowered the chances of gallstones. (x).

The Journal of Internal Medicine also published a study of 104,493 people who drank more than six cups of coffee daily lowered their chances of developing symptomatic gallstones more than those who did not drink coffee (x).

Asthma concerns some 25 million Americans and is a common childhood health concern, while teens and adults are not unsusceptible. More than two million emergency room visits yearly are due to asthma-related symptoms.

Caffeine works like theophylline, a bronchodilator drug taken to help open up the airways in your lungs, relieving asthma symptoms — coughing, wheezing and breathlessness.

Several studies involving subjects with mild to moderate asthma show that caffeine can help modestly improve their respiratory airway function for up to four hours (x).

Some studies report migraines as a chronic health concern, and reportedly caffeine effectively handles migraines when combined with analgesics, such as acetaminophen or aspirin.

However, some report caffeine as an acute treatment works well when used with analgesics. Also, caffeine boosts these medications, working concurrently together (x).

Other studies show that caffeine may trigger a migraine either after taking the caffeine or withdrawing from not having caffeine (x).

The U.S. FDA approved caffeine as a migraine treatment and therapy to lessen tension headaches (x).

If you have migraines, talk to your healthcare provider before taking any new supplements or medications.

You can purchase caffeine through coffee, tea, chocolate, and other food items. Some of these forms might be an acquired taste or not fit into a specific health plan or diet.

For example, coffee has an acidic quality, which causes heartburn for some people. The popular drink also contains other components, making the black brew diuretic, which may increase the frequency of visiting the bathroom.

You may find it inconvenient to carry coffee or other caffeine-loaded drinks. Still, a caffeine supplement is a suitable way to get your energy without the risk of spilling your drink or having to take the time to drink coffee or tea. Some feel having a cup of tea or joe relaxes them as an enjoyable break in the day.

Consider taking caffeine capsules that contain between 100-200 mg of caffeine, equivalent to a strong cup of coffee. With the supplements, you can quickly determine the amount of caffeine you’ve ingested throughout the day.

Be mindful that one serving of caffeine may be more than one dose. You must read the label and discuss it with your doctor. Also, some supplements are time-released, denoting their release into your system gradually, while other kinds release the total dose into your body instantly.

Caffeine is moderately addictive for some people, while not as addictive as substances such as nicotine. Caffeine withdrawal symptoms may be unpleasant, causing irritability, headaches, and fatigue. With that in mind, reasonably consuming caffeine is generally safe for most people.

If you stop taking caffeine abruptly or go cold turkey, it’s unpleasant. In fact, the best way to withdraw from caffeine is to stop taking it gradually. You can cut back to one or two cups a day, then one cup, half a cup and so forth. Thus, withdrawal symptoms are minimal and easier to confront (x).

The average dosage of caffeine capsules is 200 mg as a dietary supplement or as directed by a physician. Some people take as much as 400 mg daily.

Start with one capsule daily as needed and gradually increase the dosage if you feel you need to or have reached the desired amount.

Where to Buy Caffeine Capsules

Are you interested in trying caffeine capsules as a dietary supplement for its potential to support asthma, support the central nervous system, migraine relief, enhance athletic performance, lower the risk of diabetes, prevent gallstones and weight management? Contact BulkSupplements.com to place an order today.

Side Effects of Caffeine

Caffeine has distinct side effects on some individuals, specifically in doses over 300 mg. Palpitations, restlessness, agitation, headaches, tremors, dizziness, insomnia and nausea are all classic symptoms of overusing caffeine.

Anxiety, nervousness, restless sleeping, and high blood pressure can also result from too much caffeine. It is also possible to overdose on caffeine, so always follow the recommended daily dosage by your doctor.

Several decades ago, caffeine got a bad rap from supposed medical research, saying it was unhealthy. Further research shows that caffeine may benefit your health and others conclusively.

When you take caffeine safely, the supplement can give you a profound energy boost and help you stay open-eyed and alert.