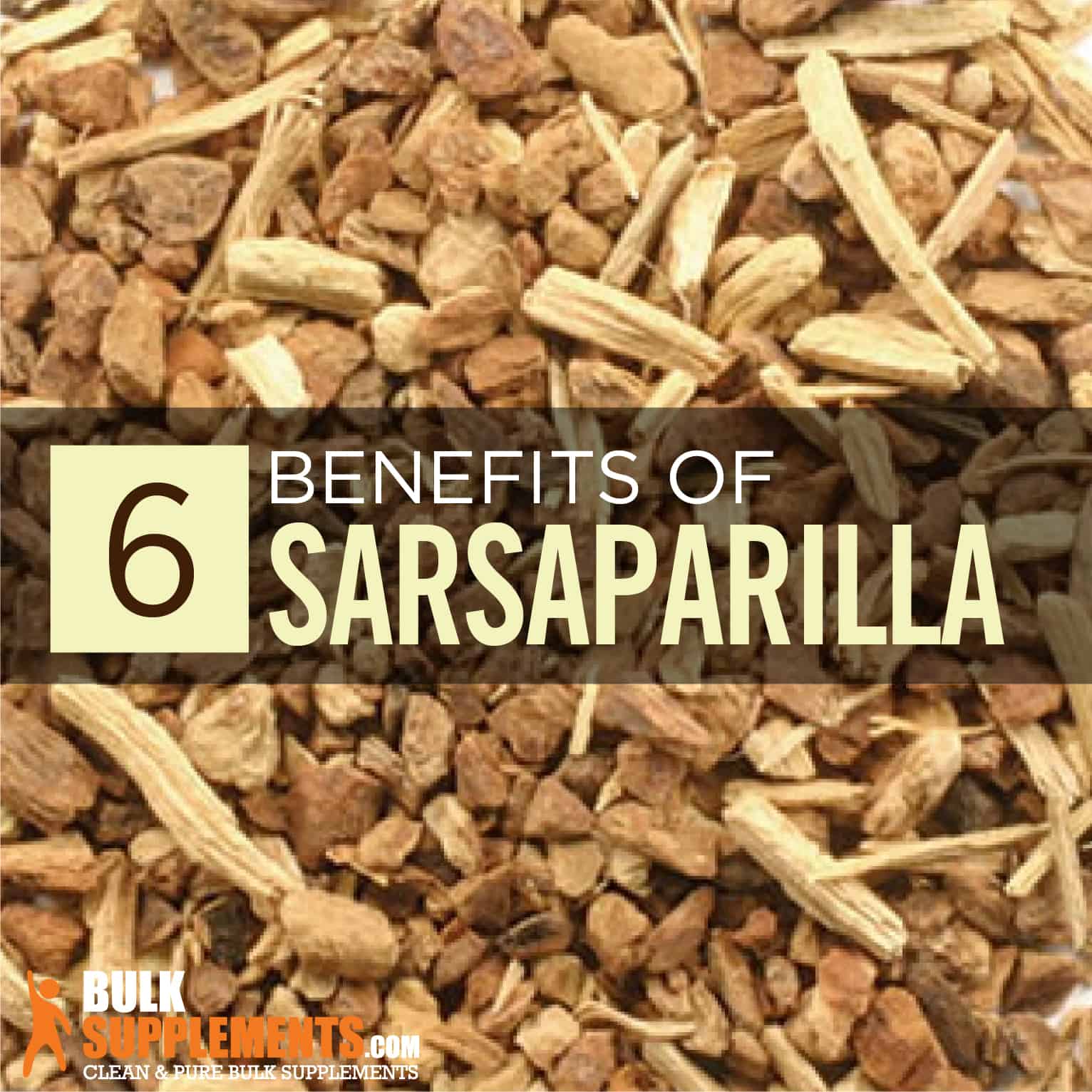 What is Sarsaparilla Root?

When you think of the word sarsaparilla, it may remind you of the old-fashioned soda popular generations ago. Or, you might have seen the natural sodas in your favorite grocery or health food store. Some say it tastes like root beer. Try it if you’ve never had the drink before and see for yourself if it tastes like root beer. Although sarsaparilla is a plant, it’s primarily known for its root, one of the first flavorings to make soda and candies. (x) However, people used the sarsaparilla plant long before soda and candy were a popular commodity.

The plant encompasses woody vines, and that’s where it got its name. The word sarsaparilla is a translation of the Spanish phrase zarzaparilla, which means “brambly vine.” There are varieties of the sarsaparilla plant in most parts of the world now, but it was originally native to tropical climates in the Western Hemisphere. (x)

Different varieties of sarsaparilla vines grow up to 50 feet high, both in the culinary and medicinal world. Green leaves, flowers, and reddish-purple berries cover it, but, as mentioned earlier, it’s the root that we use. Native Americans used the sarsaparilla root in more traditional herbal medicine practices to make a tea or tonic to treat the common cold, ringworm and skin ailments. (x) (x)

On the other side of the world, traditional Chinese medicine practitioners use sarsaparilla root to make teas and soups that treat various skin conditions because their roots have antioxidant and anti-inflammatory properties. (x)

Also known as Smilax ornate Lem, the folklore medicine treated rheumatoid arthritis and rheumatic pain. The application is consistent with Chinese medicine for anti-inflammatory. The folklore applied to the root as an analgesic for handling pain. (x)

Many cultures throughout history, including the wild west, used sarsaparilla as a treatment for syphilis. China reported it was 90% effective per blood tests. During the 1800s, cowboys moseyed up to the bar, ordered the root beer for its aphrodisiac effects on their male body. (x)

Throughout the world, historically, the plant and root help with many ailments. Some notable remedies were asthma, cancer, dysentery, toothaches, heart failure and tumors. (x)

As sarsaparilla made its way into popular culture throughout the 18th century as a flavoring agent, scientists devoted more and more research into investigating its beneficial properties to human health.

So what has the research proved? Does it confirm the traditional herbal medicinal uses? Sometimes, yes, and sometimes, it has demystified specific claims. The most conclusive evidence has pointed to the benefit sarsaparilla root has regarding antioxidant support, psoriasis, liver functioning, inflammation and arthritis. Confirm with your health care provider before starting any new supplement and discuss the advantages. Some benefits include:

Over the centuries and across many cultures, sarsaparilla root traditionally treated ailments of the skin, and today it still treats psoriasis symptoms and reduces acne. Sarsaparilla root is so successful in treating psoriasis and acne because of certain flavonoids such as quercetin. (x) (x) These flavonoids produce incredibly effective anti-inflammatory and immunomodulatory effects in treating many skin conditions. (x) (x)

An article on the validity of using herbs for psoriasis treatment reported you could combine other compounds with sarsaparilla (Smilax species) to treat psoriasis. Ingested as a powder from the root showed anti-proliferation and anti-inflammatory effects. It also includes steroid-like compounds as a practical measure. (x)

In another article reviewed the use of herbs like sarsaparillas for healing acne. The extensive report listed Indian sarsaparilla (Hemidesmus indicus Linn) as an extra with anti-bacterial and anti-inflammatory qualities to treat the skin disease. (x)

A scientific study presented the use of Smilax ornate Lem extract as an effective anti-inflammatory treatment for the treatment of rheumatoid arthritis and rheumatic pain. The test performed on rats administered the extract should significantly reduce inflammation and pain. (x)

A study determined the effective treatment of chronic pelvic inflammatory disease (CIP) by administering sarsaparilla preparations. A terrible condition caused by the inflammation of the uterus. The researchers tested mice injected with the disease characteristics and then received high-doses of the herbal extract. A noticeable change occurred, producing anti-inflammatory and anti-CPID results. (x)

Gout is an inflammatory joint condition resulting from a buildup of uric acid in the blood. Beyond the already mentioned anti-inflammatory effects of the sarsaparilla root, some studies show it inhibits uric acid buildup. It might therefore provide some much-needed relief for people suffering from painful gout. (x)

For centuries, sarsaparilla root effectively treated gout as seen by those who treated the condition and those who received it. Recently, a scientific study performed on mice proved its validity. The findings showed that Smilax china Lem reduces uric acid in the blood and reduces the possibility of damaging uric acid effects in your body. (x)

The sarsaparilla root contains compounds (resveratrol and oxyresveratrol) that reduce oxidative damage in the liver. This effect is especially true for metabolizing nicotine. Besides, flavonoids and the diuretic properties of the core contributors to general liver functioning and detoxification. (x) (x) (x)

An article called A Decrease in Cirrhosis of the Liver reports on the extremely effective combination of artichoke bud and sarsaparilla extract. Together, they both have phytochemicals (plant-based antioxidants), resulting in detoxification of the liver, removing environmental poisons, alcohol and cigarettes. (x)

The sarsaparilla root contains high phenolic compounds and health-promoting properties that can give your body effective antioxidant properties. Antioxidants fortify your body’s fight against free radicals that often cause chronic disease. (x)

The traditional Indian medicine called Ayurvedic supports sarsaparilla use as one of their recommended plants to increase antioxidant activity in your body. They’ve used the extract to help combat food famine by making an herbal drink that includes sarsaparilla. (x)

More recent studies are becoming available on the potential anti-cancer properties of sarsaparilla root. These studies suggest that the extract may fight specific cancer cells. Some are breast and liver cancer cells, including it might possess anti-tumor properties.

A study focusing on natural dietary supplements as a prevention and treatment of cancer reports sarsaparilla (Smilax Glabra Rhizome) has growth inhibitors against several kinds of cancer cells. Included are colon cancer cells and leukemia cells. The study also explained that the herb could reduce oxidative stress by neutralizing the cause — free radicals. When taken with N-acetylcysteine (NAC) or glutathione (GSH) provides the foundation for sarsaparilla to be even more of an anti-cancer agent. (x)

As a dietary supplement, take 1,700 mg (heavy 2/3 tsp) sarsaparilla root powder daily or as directed by a physician.

Are you interested in trying sarsaparilla root extract powder as a dietary supplement for your liver health, anti-inflammatory benefits or antioxidant properties? Contact BulkSupplements.com to place an order today.

Like with all supplements, you should talk to your physician before starting a new supplement.  It’s especially a good idea to talk to a doctor if you experience health problems before taking any supplements.

Sarsaparilla root may cause stomach upset. As long as one sticks to suggested serving sizes, this supplement should be safe to take for healthy adults. However, people with kidney conditions and pregnant or nursing women should not take this product without approval from a doctor.

Sarsaparilla root doesn’t just taste good. It has tons of potential health benefits that date back to ancient times. Long-established Chinese medicine practitioners use the root to make teas and soups that treat various health concerns, such as skin conditions, arthritis and impotence. It’s because the roots and tubes have antioxidant and anti-inflammatory properties.

Modern research reports scientific evidence of how good this plant is as an extract. Evidence shows its potential to treat cancer, liver diseases and gout.

Whether you are looking for a supplement to help ease your chronic inflammation, acne, psoriasis, or if you are seeking natural alternatives to conditions like gout or arthritis, sarsaparilla root may be worth a try.