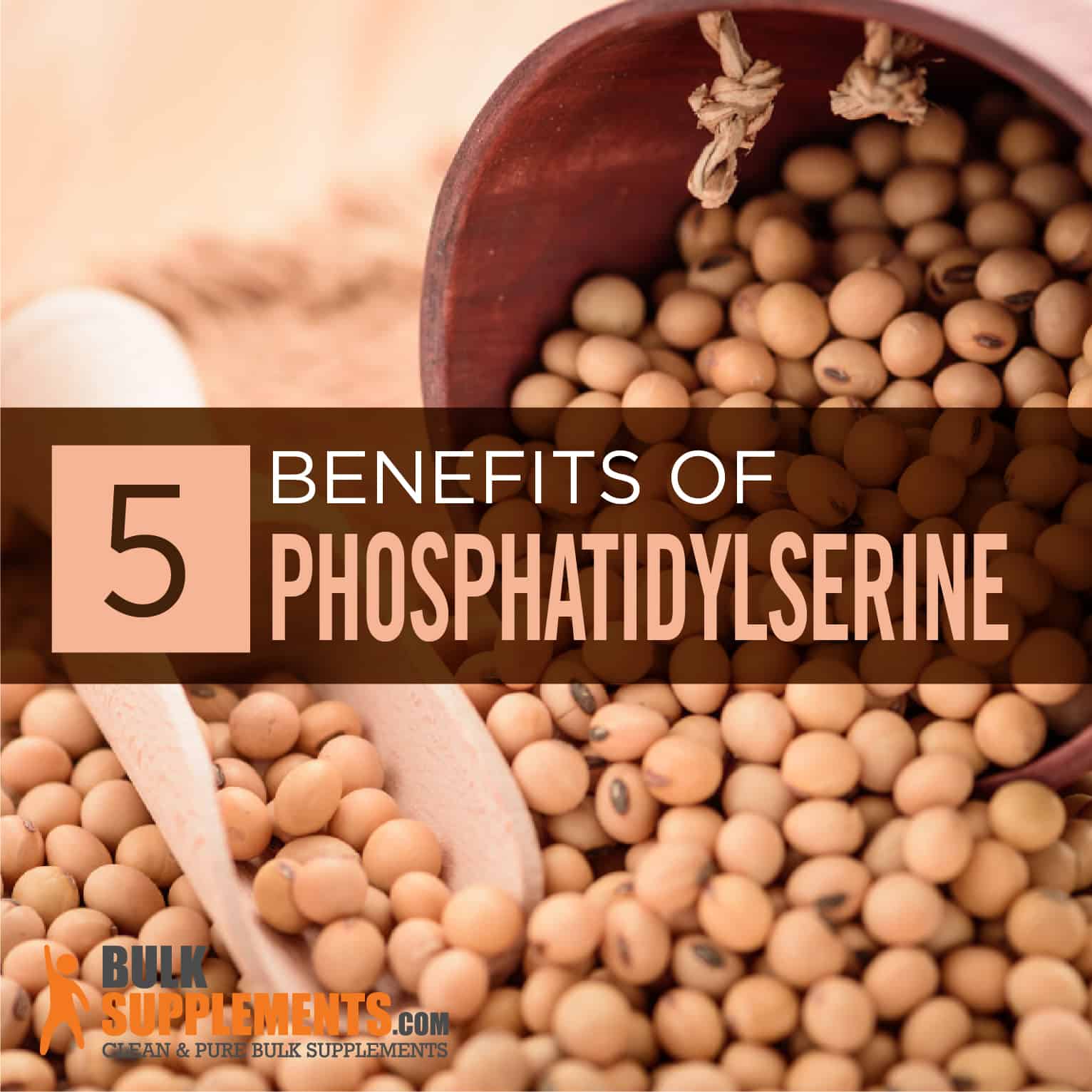 Phosphatidylserine is a chemical classified as a phospholipid — a lipid group that forms a significant part of the cell membrane. Your body naturally produces the chemical in small amounts. It’s also found in a variety of foods and supplements.

The earliest phosphatidylserine supplements actually came from the brains of cows. However, production quickly shifted to cabbages and soy due to concerns over the spread of conditions such as mad cow disease.

Today, phosphatidylserine has many different uses, with supplements mainly improving brain activity and memory, particularly in the elderly.

In a study conducted on a group of 80 people, phosphatidylserine reduced the levels of the hormone cortisol and its triggering hormone adrenocorticotropic (ACTH) (x). The positive results, however, only occurred in the group that took at least 400 mg.

Cortisol is a brain hormone produced by the adrenal glands. It helps curb stress by controlling stress factors such as fear, anxiety and pressure. It does this by increasing your body’s rate of glucose metabolism, regulating your blood pressure and minimizing inflammation (x).

Additionally, the supplement effectively controlled heart rate while improving mood and stress in the presence of a stress factor (x).

A clinical trial conducted on a group of 14 cycling men found that phosphatidylserine administered in doses of 750 mg significantly improved their exercise capacity (x). This suggests that if taken in the correct amounts, it could boost endurance and reduce workout fatigue.

Another study administered 400 mg of phosphatidylserine and 100 mg of caffeine daily to participants. Individuals who participated in the study showed significant improvement in their moods and a reduction in fatigue after exercise (x).

Yet another study of young, healthy golfers found that after six weeks, phosphatidylserine improved stress levels and athletic performance (x).

Attention deficit hyperactivity disorder (ADHD) is a common childhood neurodevelopmental disorder. Children with ADHD find it hard to control impulsive behaviors and to focus on any tasks that require prolonged concentration. It is hard for them to finish any tasks they begin, stay organized and pay any close attention to their environment. They are also hyper and overly active (x).

In a randomized placebo study, researchers gave 36 children with ADHD who had not received treatment previously 200 mg of phosphatidylserine daily for two months. The study showed that it significantly improved their mental performance while reducing the symptoms of ADHD. It also helped them focus for longer while boosting their memory (x).

Parkinson’s is a disease of the nervous system that leads to a loss of the ability to move intentionally. It is usually characterized by trembling and stiffness of the joints and limbs, poor coordination and slow movements. Parkinson’s causes difficulty eating, speaking and sleeping, and can also lead to mood disorders like depression. It is caused by poor production of dopamine, the chemical known to signal brain cells responsible for movement (x).

Alzheimer’s is a common brain disorder characterized by abnormal protein deposits (amyloid plaques) and tau tangles in the brain. This causes neurons in the hippocampus to stop functioning and eventually die. Alzheimer’s ranks as the third leading cause of death in the elderly after cancer and heart disease (x).

In the early stages of Alzheimer’s, phosphatidylserine could help prevent and reduce the accumulation of the amyloid protein deposits and improve memory, behavioral and cognitive functions.

7 Diverse Benefits of Orange Powder for the Whole Body

In one clinical study of 70 elderly people with early-onset of Alzheimer’s, participants took 200 mg of phosphatidylserine daily. Researchers noted significant improvements in memory, mental and cognitive functions during the middle of the study, although these benefits decreased towards the end (x).

As long as you stick to the recommended dosage, phosphatidylserine has few side effects in healthy adults.

In amounts exceeding 300 mg, it may cause insomnia (lack of sleep) and stomach upset. Do not take if you have soy allergies. Do not take phosphatidyl serine if you take any type of blood thinner, antihistamines, antidepressants, glaucoma medication, or medication for age-related cognitive decline. Talk to your doctor before taking this supplement if you are nursing or pregnant. Stop taking immediately and call your doctor if you experience prolonged difficulty sleeping or stomach upset.

You can find phosphatidylserine in memory-boosting complexes, capsules and pills.

You can also take Phosphatidyl Serine Powder if you’d like a purer form of the supplement. If you opt for the powder, take 100 mg one to three times daily, or as directed by your physician. To avoid the risk of overdosing, use a milligram scale for accurate measurement.

Talk to your child’s pediatrician before giving phosphatidylserine to children.

Phosphatidylserine is a beneficial supplement for memory, mental ability, and general brain health. It may improve athletic performance, reduce the symptoms of ADHD and Alzheimer’s and slow down age-related cognitive decline. While you should always consult your doctor before taking any supplements, phosphatidylserine could be a beneficial addition to your nutrition routine.