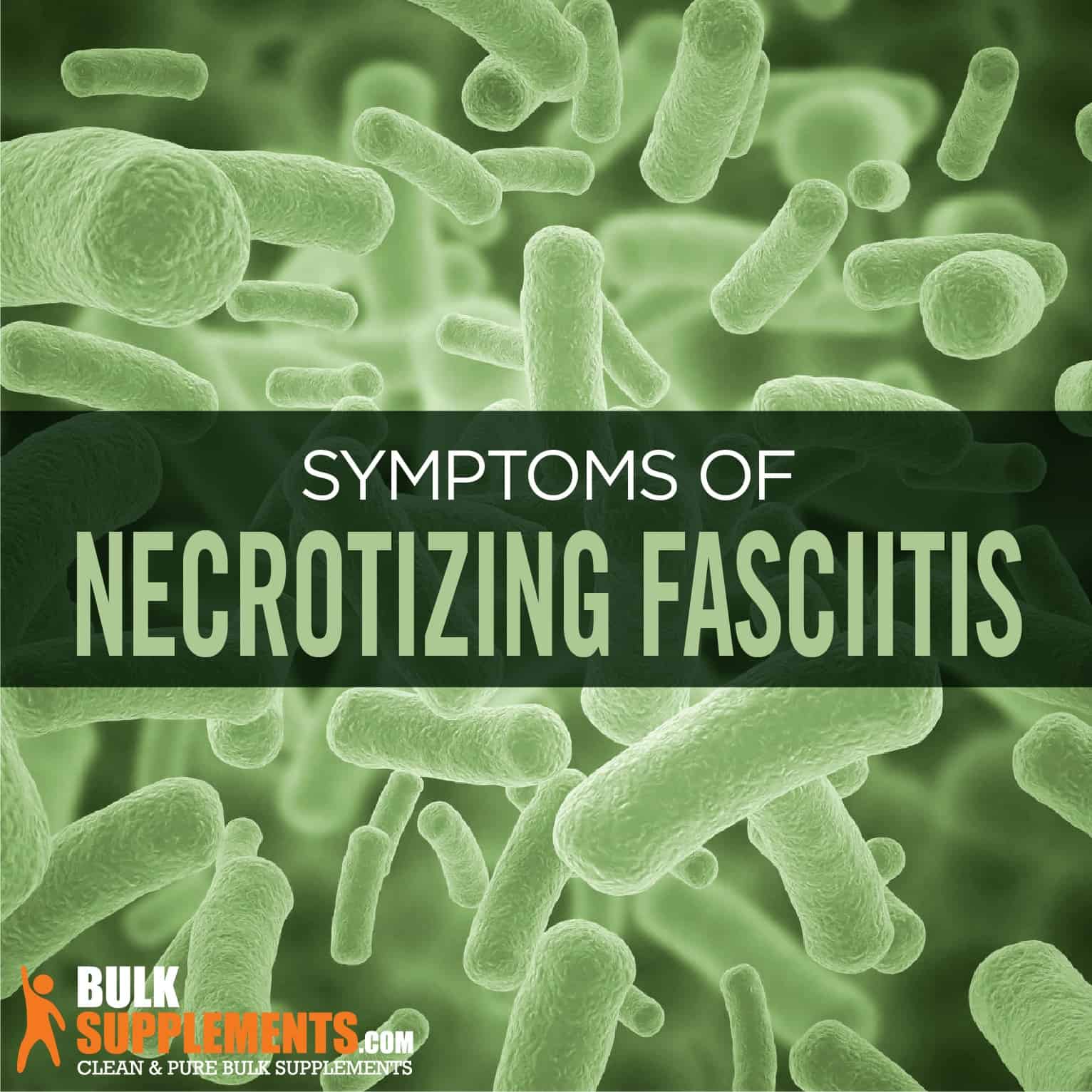 What is Necrotizing Fasciitis?

It’s name alone sounds like something out of a horror story, and in truth, the actual condition is not much prettier. Necrotizing fasciitis is more commonly known as flesh-eating disease because it quite literally ‘eats’ the flesh. This condition, though very rare, can be deadly if untreated. There are fewer than 20,000 cases of the rare skin disease reported per year, but fatality rates are high, between 20 and 80 percent. In some of the most shocking cases, death has occurred within 12 to 24 hours.

Necrotizing fasciitis is a bacterial infection caused by bacteria entering through a break in the skin, such as by surgery or trauma. The incubation period is very short and can spread within 3 to 4 days. The condition first affects a deeper layer of the skin known as the fascia, but quickly spreads to the deeper tissue covering the muscles, then fat tissue, later potentially resulting in shock and organ failure (x).

If you contract necrotizing fasciitis, your body will know it. Depending on how deep the infection is, the skin may not show signs of infection at first, but your body will. Individuals typically experience fever and generally feel generally unwell. Within a few days, the affected area may become red, hot and blistered. If you notice uncharacteristic pain and redness of the skin, do not hesitate to seek medical attention immediately. Necrotizing fasciitis can occur to perfectly healthy people, though there are factors that put individuals more at risk. These factors may include individuals with diabetes or a weakened immune system, consumers of drugs and alcohol and older adults.

Although nausea can be commonly associated with many different conditions and ailments, it is also an early sign of necrotizing fasciitis. Although it is primarily a bacterial infection that affects the skin, before it exposes itself, the body tends to start feeling unwell. Nausea is reported by majority of cases regardless of age or other specifications (x).

Individuals with necrotizing fasciitis commonly report high fever before any symptoms breakout on their skin. This is because a fever is the body’s primary mechanism for fighting off infection. Unfortunately fighting off this infection alone will not work. Fever accompanied by changing skin conditions is often what brings individuals in to seek help in the first place (x).

At this point you may think that necrotizing fasciitis is more of a head game than anything, but it is clear that this rare skin condition truly affects the entire body. The onset of dizziness can occur within hours of the infection, while skin symptoms could take 3 to 4 days (x).

Necrotizing fasciitis causes a number of symptoms, including dehydration, diarrhea and vomiting, and that isn’t even the worst of it. The rare skin condition also causes the skin to swell and change color, ultimately turning a purple violet color, until the skin finally becomes black as tissue dies. Lastly, the most characteristic symptom is unmanageable pain, until the gangrene or necrosis causes the nerve endings to die. By this point, hopefully individuals have sought treatment. Gangrene and necrosis can require more serious treatment such as amputation of the affected area.

Since necrotizing fasciitis is a bacterial infection, there is no doubt that it is primarily caused by bacteria. The type of bacteria or infecting organism can differ, as the list is found below. It is also important to note that necrotizing fasciitis can be passed from person to person, although this is rare. Direct contact with an open wound already infected with the bacteria can cause another person to contract the bacteria (x).

E. coli known as Escherichia coli is yet another common bacteria, which increases the concern for being careful of what harmful materials we come into contact with, since you never know what the outcome can be. In this case, the outcome of a virulent strain of E. coli can be necrotizing fasciitis. E. coli group C can harbor several virulence factors. It is less common than other bacterias that cause necrotizing fasciitis, which can make it difficult to diagnose and treat (x).

Aeromonas hydrophila can come from a dirty water source, hence the name ‘hydro’. The bacteria is commonly found in the United States in sewers, soil, and fresh or brackish water. Most individuals who come into contact with this bacteria may have diarrhea at worst, but individuals with a weak immune system or liver disease can contract a number of threatening conditions, such as necrotizing fasciitis (x).

It might seem like the risk for necrotizing fasciitis is everywhere, but this is not the case. Although there are a number of bacteria that can cause necrotizing fasciitis, additionally staphylococcus and clostridium, humans are in contact with bacteria daily, it simply depends on the strain. What is most concerning is that necrotizing fasciitis can occur from any type of wound, cut, or scrape, even something as small as a needle puncture.

Vitamin C is the age-old treatment recommended to young kids to boost their immune system. Amateur as the treatment may be, the incredible vitamin did once commonly prevent scurry and improves heart function, so the credibility exists. Vitamin C can be found in citrus, peppers, dark leafy greens and other orange-hued produce. It’s immunity benefits are incomparable, and while it will not cure necrotizing fasciitis alone, it can provide significant improvements. In one case of septic shock, an individual was expected to die within 24 hours, while intravenous vitamin C fully rehabilitated her. The recommended daily dosage for adults is 90 mg for males and 78 mg for females (x).

Colloidal silver simply means any amount of silver suspended in liquid. For centuries it has been used specifically to treat viral, bacterial and fungal infections, so it is no surprise it is on the list of treatments for necrotizing fasciitis. There is controversy about the use of colloidal silver, however, because it can have serious side effects. In the medical world, colloidal silver has been known to specifically kill certain types of bacteria, so it is not going away as a treatment anytime soon. The recommended dosage for colloidal silver is dependent upon the individual’s ailment, age and overall health. Colloidal silver should only be prescribed by a healthcare professional (x).

Proper wound care is an important part of tending to any wound, especially when infected by bacteria that causes necrotizing fasciitis. Although you will not immediately know whether a wound is infected, taking care of the wound can prevent the infection from spreading more rapidly. Proper wound care begins by washing and sanitizing the infected area immediately. Then cover with dry bandages and continue to change bandages while the wound is still secreting fluid. If redness or swelling is observed, or if a wound does not heal at a normal pace, these are reasons to seek professional care (x).

Avoiding public water is important, but we don’t just mean sewers and public faucets. This includes pools, lakes, rivers and oceans, although bacteria that causes necrotizing fasciitis is almost never found in these specific locations. Regardless, there’s a reason you’re advised not to enter or use water with open wounds, and that is because bacteria in public water may enter those wounds. Heed caution when using these public places, or if you work with public water, be sure to wear the proper protective gear (x).