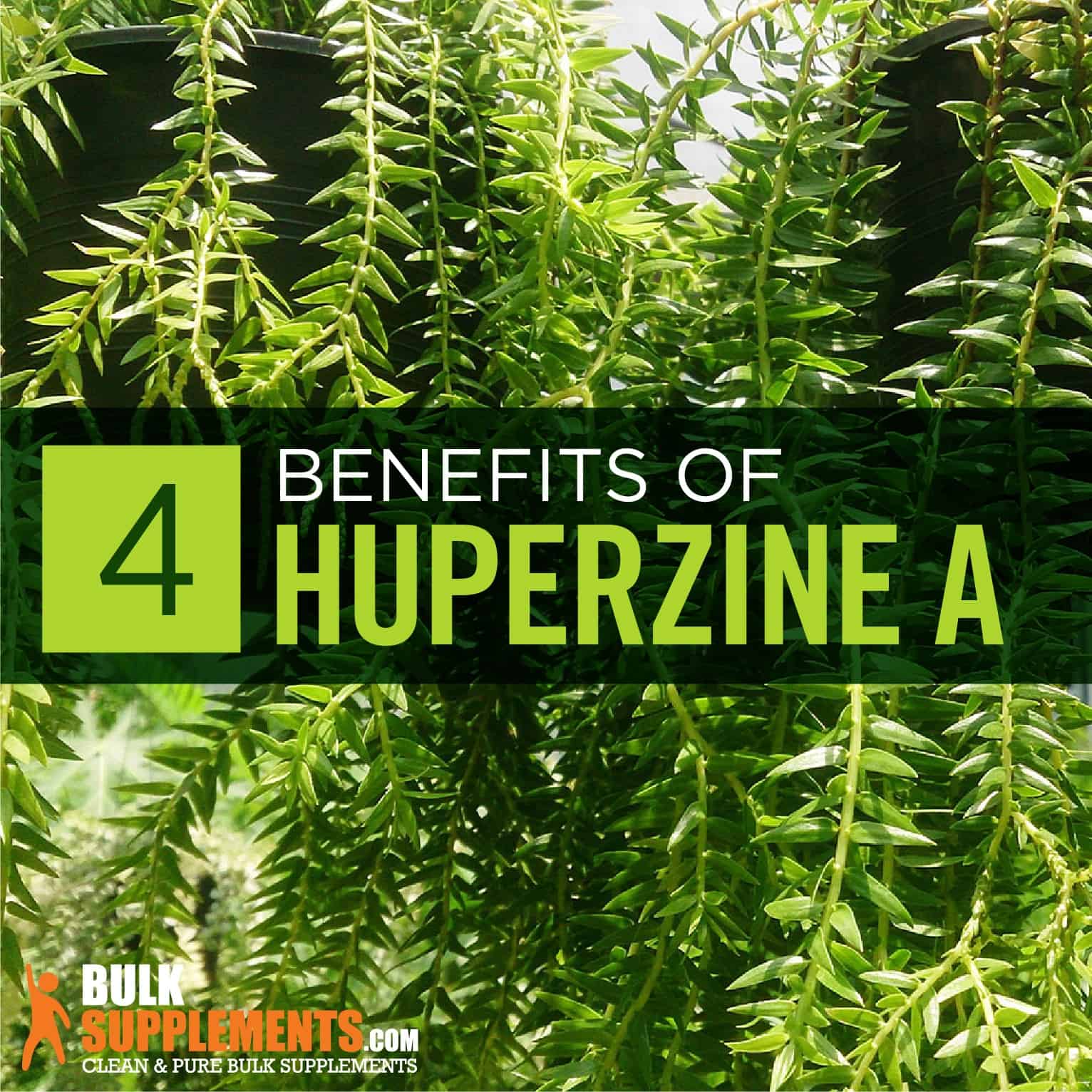 What is Huperzine A?

Growing in damp forests in China is a small, unremarkable looking plant that embodies a mighty compound. The Chinese club moss plant, also known as Huperzia serrata, was used in Chinese medicine for a very long time to treat conditions like strains, contusions, swelling and fever. More recently, the alkaloid compound huperzine A was isolated from the plant and used in an entirely new way. It appears to have specific effects on the nervous system that have potential applications for people dealing with cognitive decline and memory loss (x).

Researchers have discovered an important action of huperzine A — it inhibits the activity of an enzyme called acetylcholinesterase. But to understand what this means and why it’s important, a little background may be useful.

Acetylcholine (ACh) is a neurotransmitter in the body. This chemical messenger sends signals throughout the nervous system. It plays a role in muscle contraction as well as heart and brain function.

Enter huperzine A. Much of the therapeutic value of this compound is due to its ability to block the action of acetylcholinesterase. As a result, huperzine A has attracted a lot of attention as a compound that can help manage certain conditions that occur with low ACh levels, like Alzheimer’s disease (x).

Alzheimer’s disease (AD) is a progressive neurodegenerative disorder with devastating effects. About 10 percent of adults over the age of 65 experience it worldwide. One of the most well-known symptoms of AD is an overall degradation of higher mental functions and impaired memory (x).

Researchers still aren’t sure what sparks the onset of AD. However, they’ve found a correlation between mental function in people with AD and ACh-related activity. As a result, treatment for Alzheimer’s has focused on ways to increase ACh levels in patients (x, x).

By suppressing the creation of acetylcholinesterase, huperzine A may give the body a chance to synthesize enough ACh to get the neurological system active again (x).

Brains affected by Alzheimer’s also tend to have high concentrations of a plaque-forming peptide called beta-amyloid. Huperzine A reduces the accumulation of beta-amyloid in the brain, and therefore help slow the progression of the disease (x).

An analysis of eight studies involving a total of 733 Alzheimer’s patients concluded that compared to placebo, huperzine A did in fact improve their ability to perform daily activities, memory and cognitive function. Side effects were mild and researchers considered huperzine A to be well-tolerated (x).

It is not uncommon for people to experience memory loss to some degree as they age. However, Alzheimer’s disease is not part of the normal aging process. Cognitive decline can begin early in adulthood (x).

In animal studies, huperzine A was able to prevent brain cell damage caused by substances that could be highly toxic to brain cells. Researchers attribute this to many mechanisms, including its ability to reduce oxidative stress, protect mitochondria and influence numerous chemical pathways (x, x, x). In short, huperzine A shields the brain from the harmful effects of oxidative stress.

Huperzine A can also insulate the brain from glutamate-related toxicity. While the neurotransmitter glutamate is critical for normal brain function, it can be toxic at high levels. Genetic predisposition or trauma such as a head injury or stroke can increase glutamate to toxic levels (x, x).

As if depression wasn’t challenging enough, it can also be accompanied by cognitive impairment (x). Huperzine A could help alleviate cognitive decline associated with depression among the geriatric population (x). Furthermore, a number of studies suggest that it could improve the quality of life in those using antidepressant medications (x).

Successfully treating drug addiction requires addressing the behavioral and physiological factors of addiction. Long term drug use can, over time, alter neurotransmitter balance in the brain and, for many patients, medications are an important part of drug addiction treatment. A small study showed acetylcholinesterase (AChE) inhibitors, like huperzine A, to be highly effective at blocking cocaine self-administration in monkeys. In short, huperzine A may be helpful in assisting addicts with withdrawal from drugs, specifically cocaine (x).

Huperzine A Side Effects

Side effects are usually mild and may include digestive disturbances, excitability, drowsiness and nasal blockage (x).

Individuals with asthma, bladder issues, epilepsy or who are taking medications, including Ach inhibitor drugs, dopamine D2 receptor blockers, calcium channel blockers or beta adrenergic antagonists, should not use huperzine A without consulting a healthcare provider first.

Women who are pregnant or breastfeeding should not take huperzine A without consulting a doctor beforehand.

It’s important to realize that, like a muscle, the brain must be properly maintained and continually strengthened. As a research compound, huperzine A can help boost alertness, energy and memory. Most importantly, it shows promise as an effective therapy for the treatment of challenging neurological conditions.