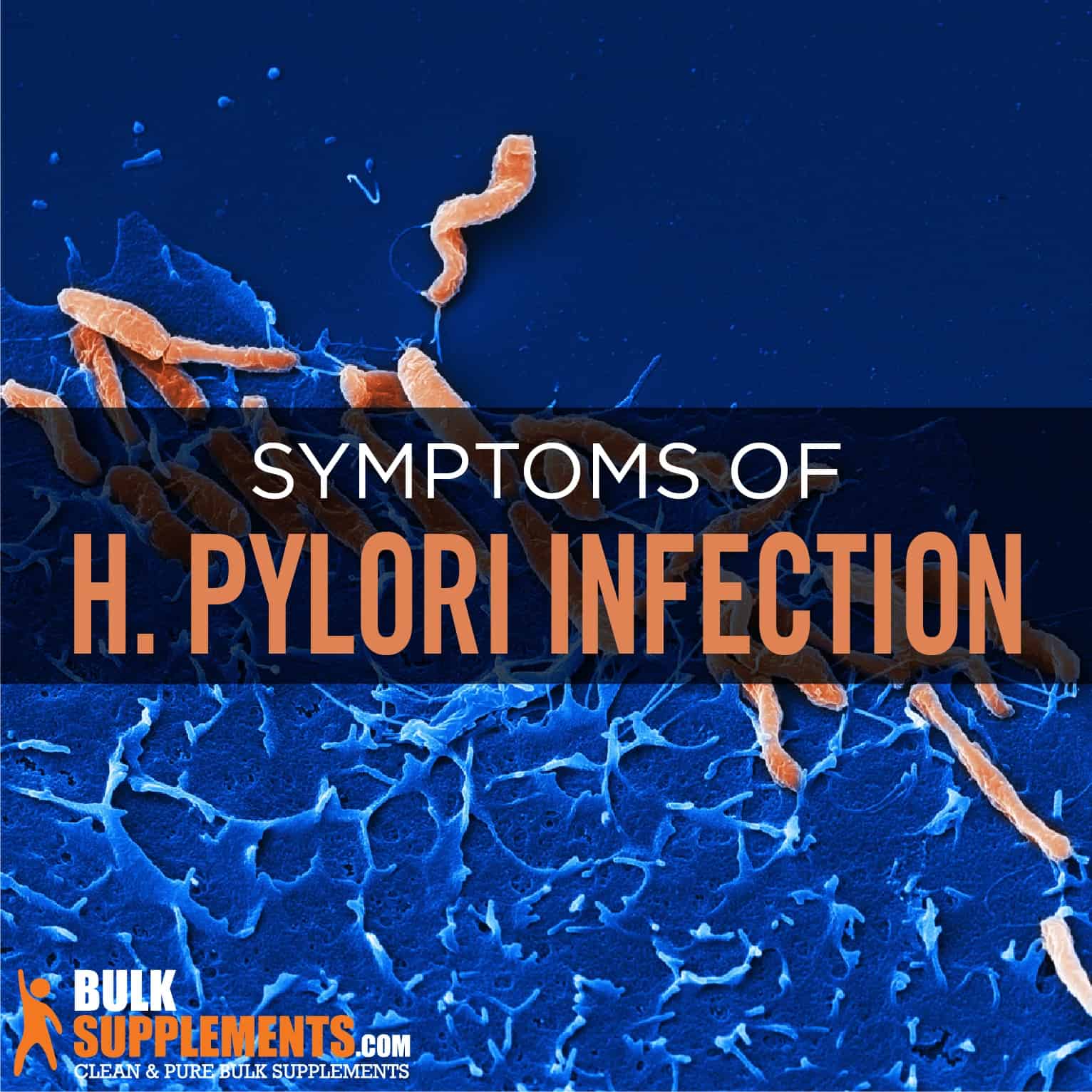 What is H. Pylori?

H. pylori stands for Helicobacter pylori — spiral-shaped bacteria that colonizes the stomachs of humans and can cause gastrointestinal problems. It’s estimated that between 50 and 80 percent of the world’s population is infected with H. pylori (x, x). In the United States, the rates of infection are between 30-40 percent (x). Despite its prevalence, this bacterium was only identified in 1982. Since then, however, researchers have been able to better understand how it spreads and how to treat it (x).

Crowded living areas and poor sanitation create conditions in which this bacteria typically spreads. While the stomach is the main reservoir for H. pylori, saliva, dental plaque, vomit and feces can also contain it. Coming into contact with these bodily fluids through person-to-person contact or ingesting it through contaminated water or food are believed to be the main routes of transmission (x).

Infection from H. pylori can cause no problems at all or can lead to the development of gastric ulcers and, less commonly, stomach cancer (x). People can be cured of H. pylori through medications like antibiotics. Sometimes, however, it’s not always easy to get rid of (x). Good hygiene, healthful eating and dietary supplements can help prevent infection or support the body as it heals from the infection.

Symptoms of a stomach ulcer include (x):

Iron-deficiency anemia and vitamin B12 deficiency can occur secondary to H. pylori infection, although researchers still don’t know why (x).

While stomach cancer isn’t common, H. pylori most often causes it. Signs of stomach cancer resemble those of an ulcer (x). The recommendation, therefore, is to see a doctor if you have any of the above symptoms that persist.

Most often, H. pylori causes no symptoms at all (x).

Most infections occur in children and persist throughout life (x). The bacteria’s flagella (tail-like appendages that the organisms use to move) enables them to penetrate the stomach lining. Once inside the stomach lining, they become inaccessible to many of the body’s immune defenses (x, x).

H. pylori is even protected from hydrochloric acid (stomach acid). The primary function of the acid is to kill bacteria and other unwanted organisms that enter the stomach. However, this bacteria burrows its way into the stomach lining and secretes substances that make the environment inside the stomach less acidic. Therefore, stomach acids do not have any effect on H. pylori (x).

The exact way that H. pylori spreads from one person to another is still unclear. However, the bacterium is often carried in human feces as well as oral secretions like saliva, vomit and dental plaque. Therefore, contact with the fecal matter without washing the hands, or mouth-to-mouth contact may cause the spread of the bacterium (x).

In addition, H. pylori can also be spread by consuming contaminated water or food (x).

Children are more susceptible to contracting H. pylori infection than adults. They are most at risk because of poor hygiene and children often put things in their mouths, unaware of the dangers. The environment and living conditions mainly determine the risk of infection (x). Those who are at risk include:

H. pylori infection can be diagnosed through stool tests and special breathing tests. Your doctor may also start by asking you about your health history and that of your family. People who live in the same household are more likely to pass H. pylori to one another.

To check for damage to the esophagus, stomach and upper intestines that H. pylori could cause, doctors may perform an endoscopy that allows them to see the lining of the digestive tract and take tissue samples for biopsy if necessary (x).

There are ways to protect yourself from H. pylori. Generally, proper hygiene helps keep the infection at bay. Some good hygiene practices include (x):

Doctors usually prescribe antibiotics to rid the body of H. pylori. Success with antibiotic treatment depends on choosing the right medication (for example, not one to which the patient will show antibiotic resistance), and using it correctly. Sometimes additional courses of antibiotics are needed. Antacids may also be prescribed to manage ulcers (x).

Some foods reduce colonization and activity of H. pylori in the stomach. As a result, they reduce symptoms of gastritis, ulcers, and stomach cancers. Foods in the brassica family such as broccoli, cauliflower, cabbage, and radishes contain compounds called isothiocyanates which inhibit both the growth of H. pylori and cancer cells (x).

Eating probiotic-rich foods such as yogurt, sauerkraut, and kimchi can disrupt the balance of bacteria in the gut in a good way, helping to keep H. pylori in check. Studies found probiotics to be especially useful when combined with conventional antibiotic treatment (x).

Finally, honey, especially manuka honey, exhibits antibacterial properties against H. pylori. In one study, researchers found that those who consumed a combination of honey and green or black tea reduced their chance of H. pylori infection (x, x).

In most cases, H. pylori infection and associated symptoms can be healed a few days after administering antibiotics. Avoid taking NSAIDs to treat abdominal pain caused by H. pylori infection because they may cause further damage to your stomach lining (x). Instead, consult your doctor for pain medication.

Blueberries contain high levels of phenolic acids which research shows limits the activity of H. pylori in the stomach and makes antibiotic treatment more successful (x). In addition, it contains loads of other vitamins and minerals that promote overall health, a healthy weight, and cardiovascular health (x). As a dietary supplement, take 800 milligrams of blueberry extract powder once or twice daily, or as directed by a physician. Best taken with a meal.

Like blueberries, cranberries contain lots of phytochemicals that reduce inflammation, slow the aging process, and inhibit the growth of bacteria (x). When tested specifically on H. pylori, one study found that a cranberry juice-based beverage reduced the bacteria’s activity in the body (x). As a supplement, take 400 milligrams of cranberry extract powder one to three times daily, or as directed by a physician. For best results, be sure to drink plenty of water during supplementation.

Tea is the most consumed beverage in the world after water. And for good reason! Green tea in particular offers unparalleled health benefits that include reducing inflammation, supporting the immune system and brain, promoting a healthy weight, and even fighting cancer (x). Thanks to its high polyphenol content, research also shows that regular green tea drinkers have lower rates of H. pylori infection (x). Some supplements, like green tea extract (50% polyphenols) are formulated to contain higher amounts of this specific compound. As a dietary supplement, it’s recommended to be taken in servings of 500 mg and consumed either once or twice a day. However, intake should never amount to more than 1,000 mg per day, and this supplement should never be used for more than 3 months at a time.

Bee propolis is a type of apitherapy which describes products made from bees that have unique healing properties. Propolis has demonstrated therapeutic effects on the digestive system including suppressing H. pylori activity (x, x). Take 1200 milligrams once or twice daily, or as directed by a physician.

When dealing with H. pylori or the stomach ulcers it can cause, celery seed extract can be effective. First, it’s shown antibacterial effects against H. pylori (x). In addition, it helps promote the production of healthy stomach secretions which protect the lining of the stomach and reduce discomfort associated with ulcers (x). As a dietary supplement, take 1,000 mg of celery seed extract one to three times daily, or as directed by a physician.

Ginger is well known for its soothing effects on the stomach. Not only does it relieve discomfort associated with an ulcer, it also inhibits the growth of H. pylori (x). Eaten fresh, made into a tea, or used as a dietary supplement, there are many ways to incorporate ginger into your daily routine. You can take 1,000 milligrams of ginger root extract once daily, or as directed by a physician. To avoid any heartburn, take with at least 8 ounces of water.

Olive oil gets a lot of credit for its health-promoting properties. However, olive leaves offer many benefits as well! Specifically, it’s an excellent antimicrobial and fights all kinds of infections from bacteria, viruses, and fungi (x). Not surprisingly, research shows that olive leaf extract also has a protective effect against H. pylori (x). Take 750 milligrams daily with meals, or as directed by a physician.