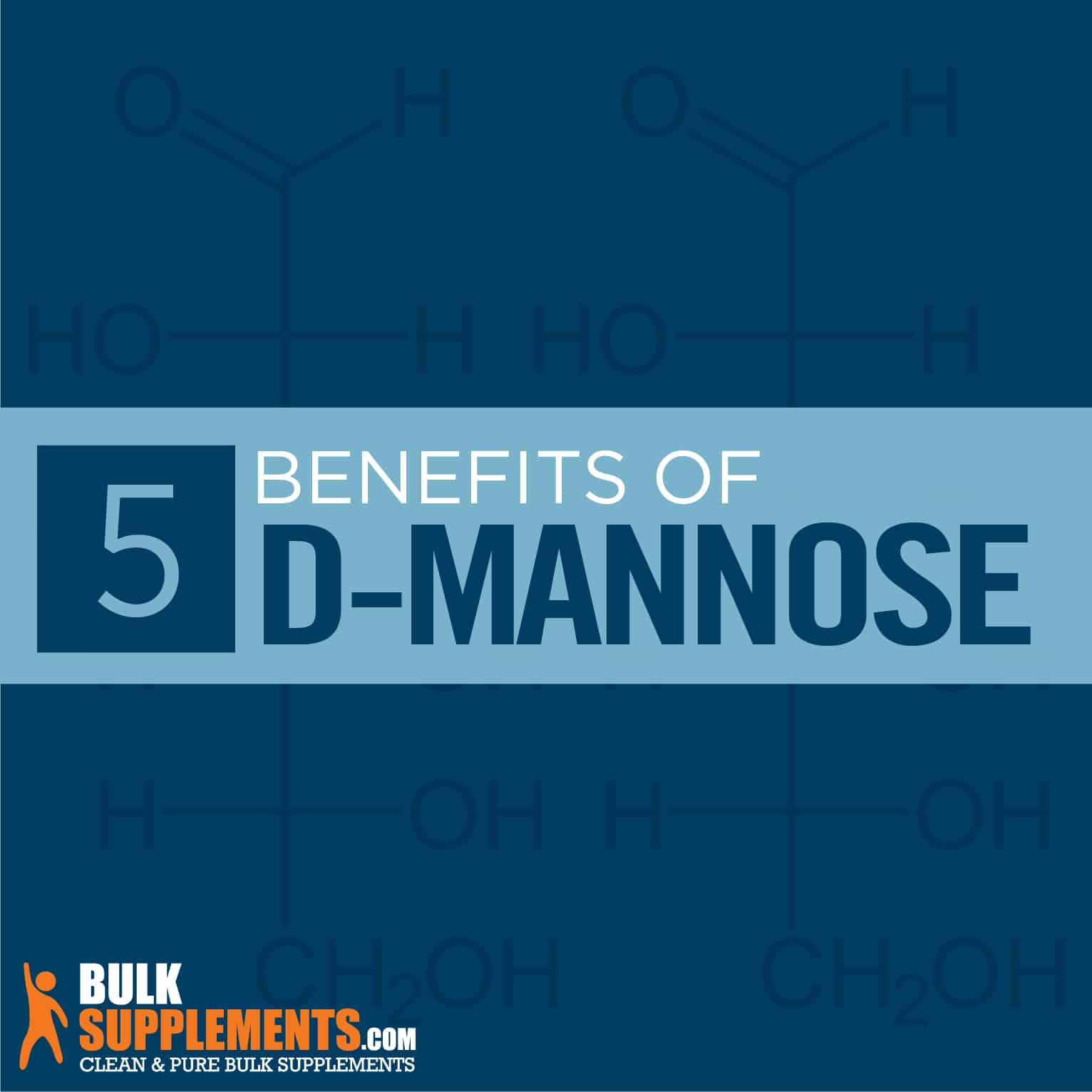 D-mannose is a simple sugar (x), which means that it contains only one sugar molecule. The body generates it naturally, but plant and food sources contain it as well.

D-mannose stimulates the growth of healthy bacteria in the gut, therefore making it a natural pre-biotic. It protects against conditions such as irritable bowel syndrome and ulcers because it binds to proteins that stomach acid and digestive enzymes cannot break down (x).

Various supplements combine D-mannose with other ingredients such as cranberry, dandelion extract and vitamin C with claims to support urinary tract and bladder health. However, D-mannose can do this on its own as well.

D-mannose interferes with the normal routine of Escherichia coli (E. coli). E. coli, the bacteria that causes 90 percent of urinary tract infections (UTIs), finds its way into the urinary tract, attaches itself to healthy cells and then begins multiplying (x). Thankfully, though, D-mannos causes E. coli to lose its ability to inflict damage on the urinary tract walls.

Recent research suggests D-mannose effectively treats and prevents UTIs. Cranberries contain high levels of D-mannose, which is why cranberry juice is often used to treat UTIs. However, it is easier to get the recommended dosage from a dietary supplement, which has less sugar than cranberry juice.

Treatment and Prevention of UTIs

Studies found that D-mannose reduces UTI symptoms (x, x). This shows promise for D-mannose as an alternative to antibiotics in the treatment of UTIs. Antibiotics are commonly used to treat UTIs as they destroy bacteria. However, antibiotics also wipe out good bacteria in the process. D-mannose, on the other hand, effectively eliminates harmful bacteria while preserving the good bacteria. Although it shows promise, it should not be considered a replacement for antibiotics when treating UTIs (x).

Studies also show that D-mannose effectively prevents UTIs from recurring in the future (x, x, x, x). In one study, it was just as effective in UTI prevention as an antibiotic (x). As long-term use of antibiotics increases, so do the chances of bacteria developing into a more resistant strain. This is not the case with D-mannose, though. Therefore, non-antibiotic treatments for UTIs are becoming increasingly popular.

According to research, this supplement helps support and balance the immune system. This is a result of how it stops emissions of toxic byproducts that cause inflammation (x). It may also effectively treat and prevent autoimmune diseases and allergies (x).

Treatment of Congenital Disorders of Glycosylation

D-mannose helps to improve congenital disorders of glycosylation (also known as carbohydrate-deficient glycoprotein syndrome). This rare genetic disorder causes enzymes to improperly bind sugars such as D-mannose to proteins, which results in organ damage. There are two types of this disorder.

Although higher levels of D-mannose can be found in dietary supplements, this nutrient can also be found naturally in a variety of plant sources. The following are just a few foods that contain it:

Some of the foods we eat provide D-mannose. Dietary supplements contain higher levels of it, however.

You can get supplements in the form of capsules or powders. Your preference will determine which form you choose. The powder might be a better option if you prefer to dissolve this nutrient in water and drink the slightly sweet mixture. On the other hand, capsules might be better if you want to take the supplement in just one swallow. Regardless of the form, they both provide the same health benefits.

D-Mannose Dosage and Side Effects

The appropriate dose of D-mannose depends on several factors including age, health and other conditions. There is insufficient scientific information regarding the appropriate range of doses for D-mannose, however (x).

However, the recommended daily dosage is one teaspoon (2500 mg) or as directed by a physician.

D-mannose is generally a well-tolerated supplement that causes minor or no side effects when taken for UTIs. Some people reported experiencing loose stools or diarrhea (x) but not to the point of having to discontinue taking the supplement (x).

You are encouraged to consider the possible side effects and interactions before adding this supplement to your regimen. Avoid this supplement if you are pregnant, nursing or under the age of 18. People with medical conditions should consult their physician before taking D-Mannose.

D-mannose is a natural and safe dietary supplement. It is used to alleviate symptoms of a rare genetic health disorder. It also shows promise for supporting the immune system and treating UTIs. However, more research is needed and currently being conducted to explore these health benefits.