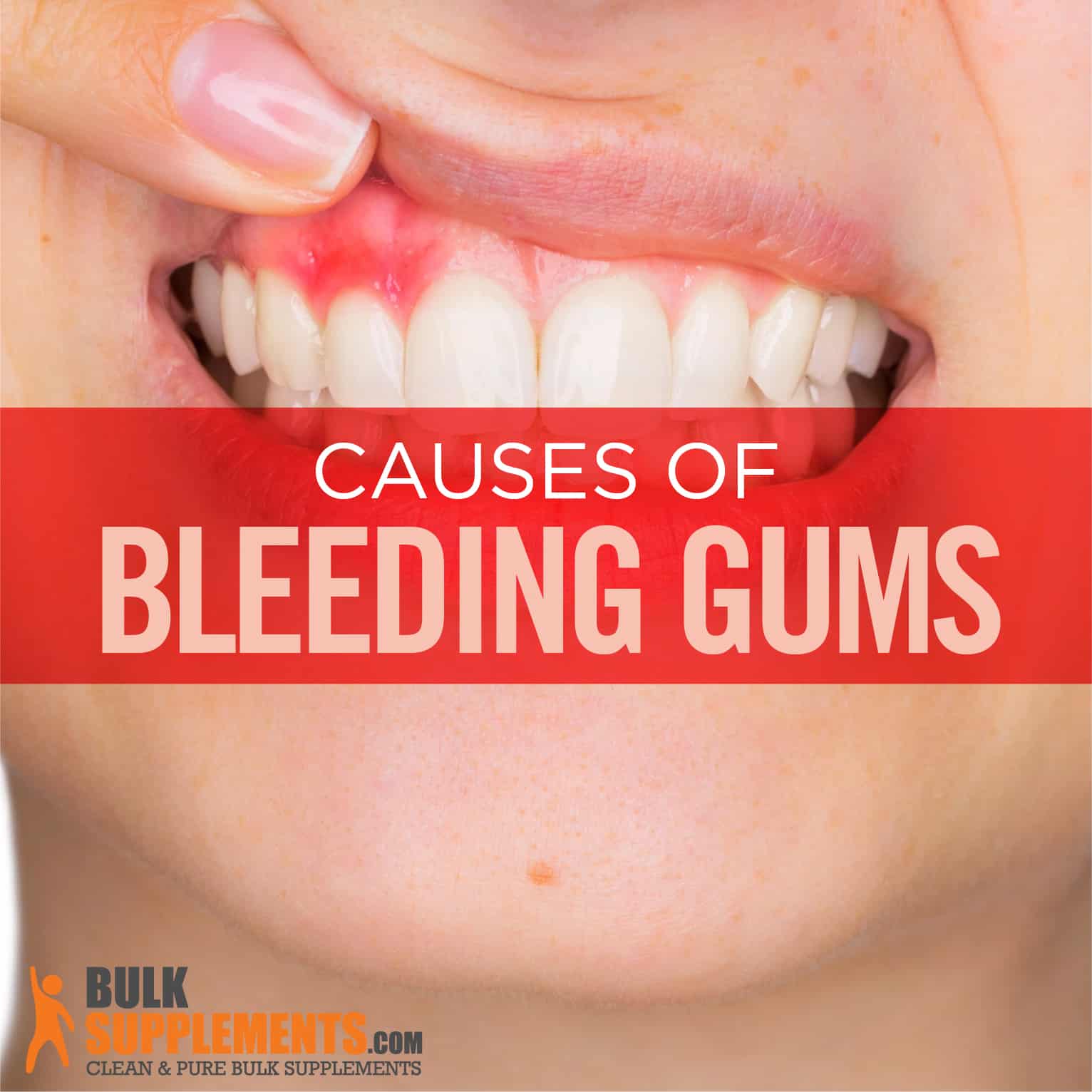 What are Bleeding Gums?

According to the American Academy of Periodontology (AAP), three out of every four Americans suffer from some form of gum disease. While most are mild, a large percentage of them are severe enough to create bleeding gums, among other symptoms. Worse yet, even with these painful symptoms, few people seek treatment for them. (x)

Today, most of these ancient remedies may work in healing or relieving bleeding gums. We’ve come a long way from then and understand the importance of a healthy diet and proper dental hygiene. So what causes bleeding gums? And how can you treat them today?

Depending on how advanced your condition is, you have plenty of ways to treat yourself before heading to the dentist. Let’s start with the basics.

Bleeding gums are a symptom of gum disease. Occasional bleeding may occur from over-brushing your teeth, dental flossing or wearing incorrectly fit dentures. However, frequent bleeding is a sign of more severe problems, which may include: (x)

Most often, dental problems cause bleeding gums because of poor dental hygiene. Depending on their severity, they may be treatable by merely increasing the number of times per day you brush your teeth, floss and use an antiseptic mouthwash. The most common dental conditions that cause bleeding gums include:

The CDC estimates that nearly 50 percent of Americans suffer from gingivitis. Gingivitis develops when plaque — the debris that sticks to your gums and teeth — builds up on your gums. Brushing your teeth removes the plaque, but often people do not brush their gums properly. For people who do not floss, this only worsens the problem. (x)

Over time, the plaque may harden into tartar, which further increases their bleeding. Early signs of gingivitis include puffiness of the gums, mouth soreness and bleeding.

An advanced gum disease, Periodontitis, occurs once plaque has hardened into tartar. Tartar creates gaps that form in your gums. Food and other particles become trapped, resulting in infection of the gum and connective tissue. It may also cause your teeth to loosen and even fall out. (x)

As we all know, our bodies need a healthy diet rich in vitamins and minerals. Vitamin C and K deficiencies are one of the leading causes of bleeding gums. Most people who follow a good diet should have enough vitamin C and K, but if you have bleeding gums but good dental hygiene, you need to ask your doctor to check your vitamin levels. You may suffer from an imbalance and need supplements. (x)

There are a few additional causes for bleeding gums. Improperly fitting dentures may cause gum bleeding. If this is the case, you need to talk with your dentist to create a new cast that better fits your mouth. (x)
Gum bleeding is common during pregnancy because of hormonal changes that cause gums to become more sensitive. Besides, having disorders such as leukemia and hemophilia increase the risk of bleeding gums, so does taking blood-thinners such as aspirin and heparin. (x)

How to Treat Bleeding Gums

Preventing and managing bleeding gums begins with proper dental hygiene. Start with visiting your dentist twice each year for an examination and a thorough cleaning. Your dentist or hygienist will inform you if you have gingivitis and teach you proper brushing techniques. Although you may attempt it, do not lie to your dentist about how often you floss.

Healthy dental hygiene habits prevent plaque buildup and the onset of periodontal disease. Your hygienist or dentist may also advise you to use an antiseptic mouthwash with tree tea oil, which will reduce plaque-forming bacteria in your mouth.

People with sensitive or inflamed gums should rinse with warm salt water to reduce inflammation. Victorians practiced “take the waters” by soaking in salt water to lower their inflammation for ailments like rheumatoid arthritis. (x)

Try switching to a softer toothbrush as stiff bristles irritate sensitive gums and cause bleeding. Remember, brushing your teeth is not the same thing as cleaning the floor. You do not need to scrub your hardest with firm bristles. It is doubly true for people with sensitive gums. You may also want to consider an electric toothbrush. The design of these brush your teeth while cleaning your gum line better than a standard toothbrush.

Gargling with hydrogen peroxide as a scientific study proved that swishing diluted peroxide around inside your mouth for up to three minutes, don’t swallow it, significantly reduces plaque and retards gingivitis development. (x)

Swishing sesame oil in your mouth or oil pulling is a procedure that includes swishing oil in your mouth for systemic and oral health benefits.  It’s a traditional Indian remedy as to therapy for strengthening gums, teeth, and jaws to prevent bleeding gums, dryness of throat, tooth decay, cracked lips, and oral malodor (bad breath.) The concept is not new, and Ayurvedic text Charaka Samhita discusses the therapy.

First thing in the morning, on an empty stomach, take a tablespoon of sesame oil into your mouth. Sip, suck, pull it between your teeth for 10 to 15 minutes. The thick oil turns thin, then milky white. The swishing draws toxins out of your blood and activates enzymes. Do not swallow the oil as it contains toxins and bacteria. Spit it out in a plastic-lined garbage can, not the sink, as it will clog. Brush your teeth and rinse your mouth out. (x)

If your dental hygiene is not the cause of bleeding gums, then schedule an appointment with your doctor. You may need to do a physical examination and a blood test to determine the underlying cause of your bleeding. Treatment will vary depending on the condition. (x)

Your diet also strongly influences your oral health. Be sure to avoid foods high in sugar that may cause cavities and gum disease. Likewise, smoking leads to dry mouth, which is another leading contributor to dental problems. It is essential to drink plenty of water per day and avoid excessive alcohol consumption.

As mentioned, vitamin deficiencies are also a leading cause of bleeding gums. Check with your healthcare provider whenever you start a new supplement. The following dietary supplements can help prevent the onset of symptoms and improve overall health:

Vitamin C is a powerful antioxidant and anti-inflammatory essential for our health. Although we know it’s best as an immune system booster, it is also crucial in maintaining our teeth and gums’ health by working together with other essential minerals like iron and healthy fats. (x)

Also known as vitamin C ester, ascorbyl palmitate is an excellent complement to a vitamin C supplement. Vitamin C is water-soluble, whereas Ascorbyl Palmitate is fat-soluble. It means a difference in how your body processes it. It absorbs more of the vitamin C in this form, so you see more of its significant benefits. (x)

Vitamin K deficiency is also a leading cause of bleeding gums. Fortunately, you can find it in abundance in many foods, including kale, spinach, watercress, soybeans and olive oil. If you are taking any blood thinners, you definitely need a vitamin K supplement of 90-120 mg per day, depending on your age and gender. (x)

Often referred to as ribose, your body uses this essential sugar for energy. It works with the mitochondria (power stations) in your cells and is an effective booster for your cardiovascular system and decreases pain levels. You can also use it as a healthy substitute for sugar. Doctors recommend a 5 mg (or ½ teaspoon) of D-ribose per day with meals. You mix it easily into any beverage. As a quorum sensing inhibitor, treats bacterial infections, a study on mice reports QSI reduced bacterial infection and periodontal breakdown in periodontal tissues after infection of P. gingivalis. (x) (x)

Where to Buy Natural Supplements for Bleeding Gums?

Though bleeding gums are extremely common, it’s something you should be concerned about if you notice the health concern. Taking care of your dental hygiene is the best way to avoid any bleeding gums.

They often result from poor dental hygiene along with critical vitamin deficiencies. With the right changes in dental habits, including a twice-annual professional cleaning along with the help of these essential supplements, you can prevent bleeding gums and promote not just healthy teeth and gums but boost your overall health.

Practice prevention, but if you have bleeding gums from poor dental hygiene, you can change your lifestyle by implementing several options.  You can try gargling with salt and water, hydrogen peroxide, or an antiseptic mouthwash with tea tree oil. You can also try oil pulling.

These suggestions can also prevent bleeding gums and maintain overall healthy teeth and gums. Don’t respond with surprise if your dentist or hygienist notices a big difference in your oral hygiene – just smile your pearly whites. You’ll most likely spend less time in the hygienist chair since you do such a good job cleaning your teeth at home.