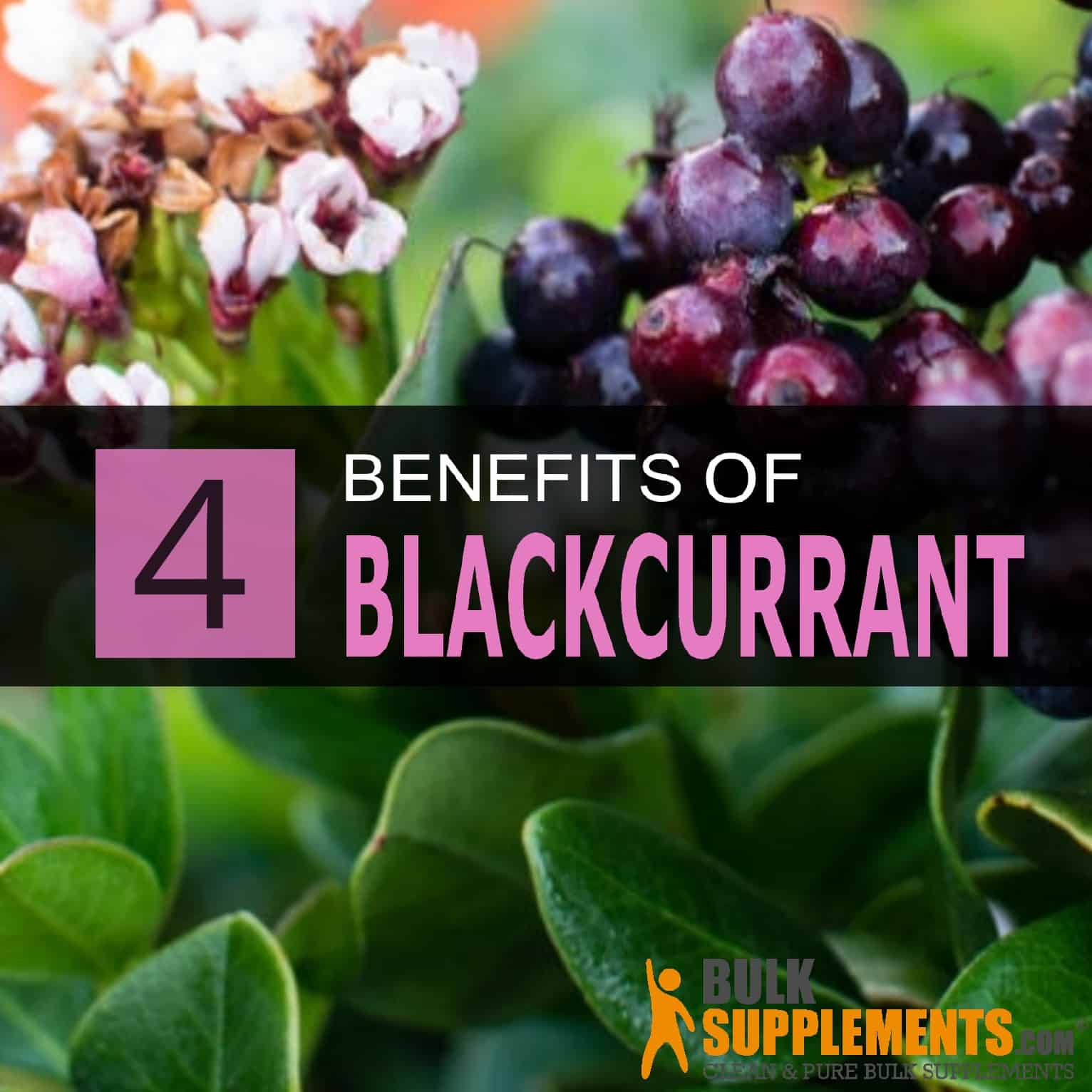 Most people know that berries are full of antioxidants and other special nutrients, and blackcurrants are no different.  Whether they are consumed as regular berries, or through a juice, jam, or preserve, they’ll add quite the nutritious punch to any diet.  With their powerful antioxidative and antimicrobial properties, blackcurrants can help protect against and help with different ailments, like arthritis, rheumatism, coughs, inflammation, and others (x).

Keep in mind that while some research may suggest blackcurrant health benefits relieve medical conditions, it is always recommended that patients talk with their doctor before consuming blackcurrant berries as a supplement.

Blackcurrant is actually the name of the perennial shrub that grows the blackcurrant berry.  It comes from the family Grossulariaceae and is commonly bred in Scotland, Poland, New Zealand, and Norway, to name a few.  Amazingly, the shrub is winter hardy, so it can survive adverse growing conditions, though it prefers more temperate climates, like central Asia and central and northern Europe (x).

Blackcurrants have been cultivated since the 11th century in Russia when they were grown in monastery gardens (x).  During World War II, they were grown as a substitute for other foods rich in Vitamin C that were hard to come by in England (x).  They were also originally banned in the United States after it was believed they contained a fungus that threatened the U.S. logging industry but has since made a small comeback in certain states (x).

What is Blackcurrant Used For?

The berries can be cooked with sugar to create a puree, which can then be added to yogurt, pies, sorbets, cheesecakes, and so on.  But because of blackcurrants’ strong flavor, they can be modified with other fruits, like apples, raspberries, and strawberries (x).  They can also be used in savory dishes as well, having been often combined with roast beef, duck, and lamb.

Beverage-wise, blackcurrant juice has been used to make cordials in British pubs (x).  They can also be combined with whey in order to make an energy drink (x).

While blackcurrants have been a small part of traditional medicine, many modern studies have linked them to potent anti-inflammatory and antioxidative effects.  This is thanks to their biochemical constituents, such as anthocyanins, flavonoids, and phenolic acids, among others (x).  Many human studies give small evidence of blackcurrants’ effects on cognitive performance regulation of blood glucose (x).

Clinical research on flavanoids and anthocyanins has suggested beneficial effects on heart health, including on blood vessels, lipoproteins, and platelets.  Further research is needed to conclude whether consuming a huge amount of these biochemicals will help prevent or relieve coronary heart diseases (x).

One 2017 study from the European Journal of Applied Physiology looked at the effects of blackcurrants on the arterial pressure and total peripheral resistance in 15 endurance-trained male cyclists.  The cyclists went through 2 hours of prolonged exercise and received 600 and 900 mg of blackcurrant supplement per day.  The results yielded a significant decrease in their arterial pressure and total peripheral exercise (x).

A 2018 study from the Journal of Nutritional Science and Vitaminology found that blackcurrant extract could significantly reduce blood glucose levels, as well as improve glucose tolerance, in mice with type 2 diabetes (x).

Blackcurrant also contains a lot of potassium, an important electrolyte.  Potassium helps regulate the heart’s electrical activity, as well as smooth muscle contractions for all the body’s organs.  A half-cup serving of black currant juice contains 721 mg of potassium, just over 15 percent of the daily recommended intake for adult men and women (x).

A 2014 study from the Journal of Dietary Supplements found that consuming blackcurrant supplements both before and after a period of exercise helped prevent muscle damage and inflammation (x).

Blackcurrant berries are a vastly rich source of Vitamin C, containing three times as much as oranges (x).  They also include a type of omega-6 fatty acid called gamma-linolenic acid (GLA), which supposedly helps ease inflammation in the body, as well as muscle/joint pain, soreness, and damage (x).

Some studies have also suggested that consuming anthocyanins lowers the risk of obesity and type 2 diabetes (x).

Some clinical research has suggested that GLA in blackcurrants might help with dry eye syndrome.  This can assist the eyes’ ability to adapt to darkness, can slow symptoms of visual fatigue, and promote blood flow to the eyes (x).

A 2012 study from the Department of Ophthalmology in Japan suggested that patients with open-angle glaucoma might benefit from consuming blackcurrant-based anthocyanins with an antiglaucoma medication (x).  The same lab conducted a similar study in 2013, where it was suggested that blackcurrant extract could decrease levels of endothelin-1, a hormone that is believed to contribute to developing glaucoma (x).

Everyone knows that Vitamin C is a huge immunity enhancer, but how?  According to several studies, Vitamin C protects against diseases like pneumonia, diarrhea, and malaria, and can shorten the length of time that respiratory tract infections last in the body (x).

The antioxidants found in blackcurrant contain plenty of Vitamin C which, as previously established, can help reduce the risk of stroke, heart disease, and cancer, and also help prevent tissue damage caused by free radicals (x).

Blackcurrants might also help protect against pathogens found in various viruses.  A 2012 study from the Department of Microbiology in Japan looked at whether blackcurrant extract affected the spread of viruses like adenovirus and influenza.  The results showed that blackcurrant extract with a concentration of less than 1 percent could block the growth of these viruses by over 50 percent.  Additionally, an extract of 10 percent concentration blocked 95 percent of these viruses from sticking to cells (x).

The same lab performed another study in 2003, which found that treating certain strains of influenza with concentrated blackcurrant extract could completely suppress virus growth (x).

Just one half-cup serving of black currant juice contains just over 405 milligrams of Vitamin C, which is between 3.8 and 5.4 times the recommended daily intake for adults (x).

Consuming blackcurrant berries, oil, or seeds as regular food has proven safe so far.  However, people with bleeding conditions should exercise caution when consuming.

There is not enough evidence to suggest any effects on fetuses or breastfeeding patients, so erring on the side of caution and not consuming is suggested.

Patients with bleeding disorders should also be cautious since blackcurrant might slow blood clotting, and therefore cause more bleeding and bruising.  Similarly, surgery might cause extra bruising for bleeding, so patients due for surgery should stop consuming blackcurrant at least two weeks prior to the procedure.

Whatever the reason for consuming it, patients should always speak with their doctor or a healthcare provider before taking blackcurrant with any of their current medications, especially for high blood pressure.

How to Take Blackcurrant

At this point, there is no determined range of doses for blackcurrant supplements.  How much blackcurrant one should consume depends on health, age, and other medical conditions.  Patients should take care to follow all product label directions or a healthcare provider’s advice.

Blackcurrant can be consumed as a powder, oil, juice, or dried fruit.  Consumers should be aware that, because blackcurrants can be bitter, many blackcurrant products have a lot of added sugar to offset the taste.  Health-conscious patients might consider finding ways to modify blackcurrants in their own homes to best reap the health benefits.

When consuming blackcurrant powder as a dietary supplement, take 5 g (about 2 tsp) once or twice daily, or as directed by a physician (x).

Where to Buy Blackcurrant Supplements

Are you interested in testing blackcurrant supplements for their powerful immune and antioxidative effects?  Contact BulkSupplements.com to place an order today.

Sometimes called a “superfood,” blackcurrants pack a lot of nutrients into just one serving, providing almost triple the daily dose of Vitamin C.  While they may be strong and bitter, they can be sweetened with other ingredients and can be eaten in all kinds of ways.  No dangerous side effects are connected with blackcurrants.