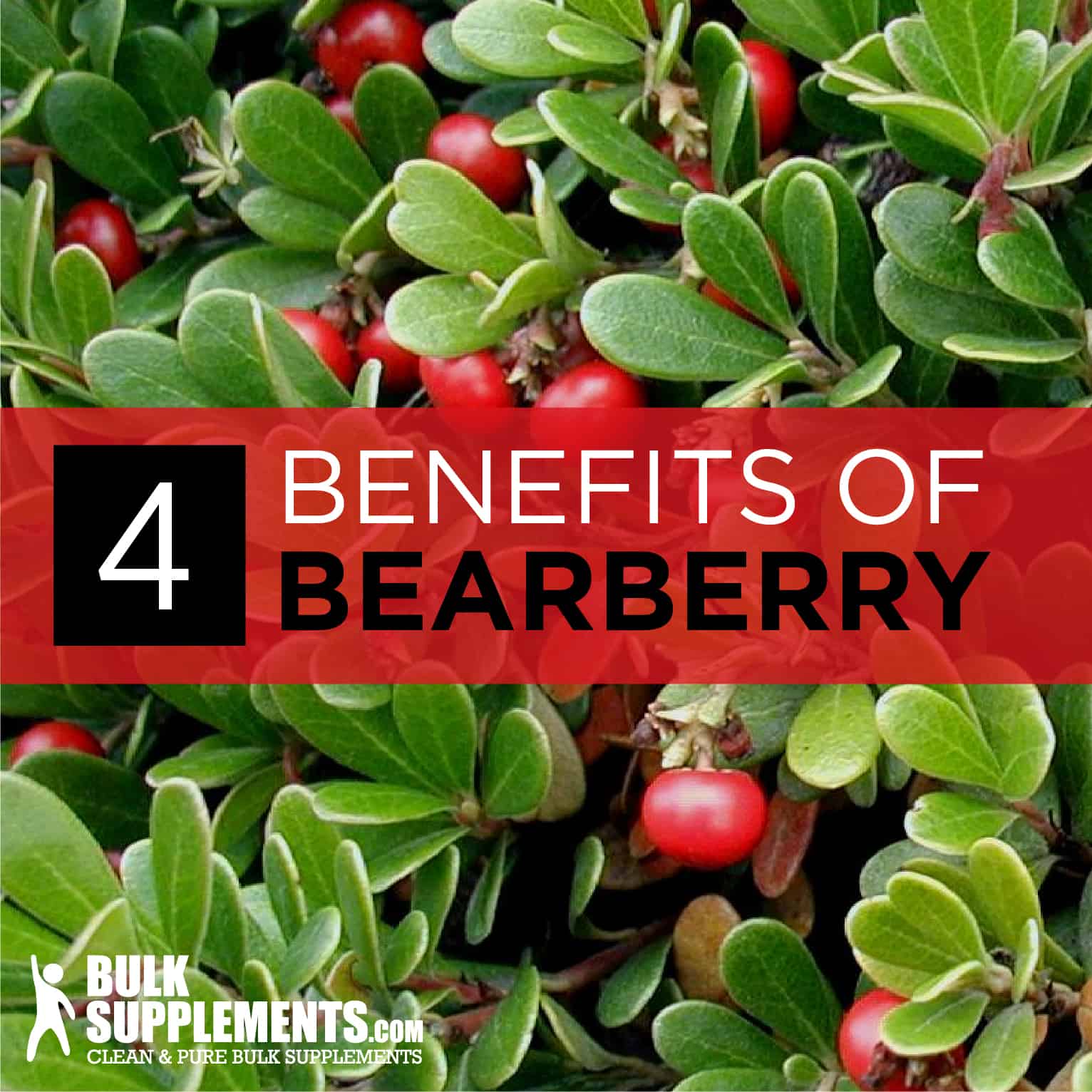 Bearberry, also known as Arctostaphylos uva-ursi, is a low-growing plant native to Asia, Europe, Central and North America. The herb gets its name from one of its biggest fans: bears love to eat the small red berries that grow on the shrub (“uva ursi” means “grape of the bear” in Latin).

But bears aren’t the only ones reaping the benefits of this powerful little herb–bearberry leaf is a natural remedy for urinary tract infections (UTIs), and a popular ingredient in skincare products.

So how exactly can bearberry extract keep you healthy?

UTIs are extremely common and can be treated successfully with antibiotics. But as concerns grow about antibiotic resistance, many people prefer to try other ways to get rid of infections.

Bearberry extract can help disinfect the urinary tract and improve the uncomfortable symptoms of a UTI. Scientists chalk up its healing abilities to a compound found in the plant called arbutoside.

Once it reaches the kidneys, arbutoside converts to another substance, hydroquinone, which acts as a natural antimicrobial agent, clearing infection throughout the urinary tract. (x).

Bearberry leaf’s antimicrobial properties don’t just clear up UTIs; they also fight bacteria like Proteus vulgaris and E. coli, which cause intestinal infections, pelvic inflammatory and sexually-transmitted infections like Ureaplasma urealyticum and Mycoplasma hominis, staph infections, pneumonia, sepsis, strep, and Candida–a pretty impressive skill set for a little leaf! (x) It may also work as an anti-inflammatory, making it harder for bacteria to “stick” to the lining of the urinary tract. (x)

The Commission E (a scientific advisory board in Germany that gives advice on the use of traditional, folk and herbal medicine) has approved the use of bearberry leaf as an antimicrobial based on its long-standing use in traditional medicine, as well as German studies from the 1970s and 1990s that support its effectiveness (x).

But bearberry extract may not work for everyone. Research has found that if urine is too acidic (meaning it has a pH below 7), the compounds within the leaf will not have the intended antimicrobial effect. Plant-based foods have been shown to raise urine pH, thus making bearberry more effective (x).

While bearberry leaf is usually used to treat a UTI, one study suggests that regular use can prevent one of the most common UTIs: bladder infections (technically called cystitis).

In one study, scientists gave 57 women who were prone to cystitis either bearberry leaf or placebo for one month. Those who took bearberry leaf reported fewer recurrences of cystitis after one year compared to the women who took the placebo, suggesting it may have a prophylactic (preventative) effect. (x)

Bearberry contains a compound called arbutin, which halts the production of melanin–a pigment that darkens skin and leads to discoloration. Cosmetic creams that contain bearberry could help reduce the appearance of age spots for a firmer, more youthful look. More research is needed, but according to the Environmental Working Group, there is a very low hazard risk associated with bearberry’s use as a cosmetic ingredient (x, x). 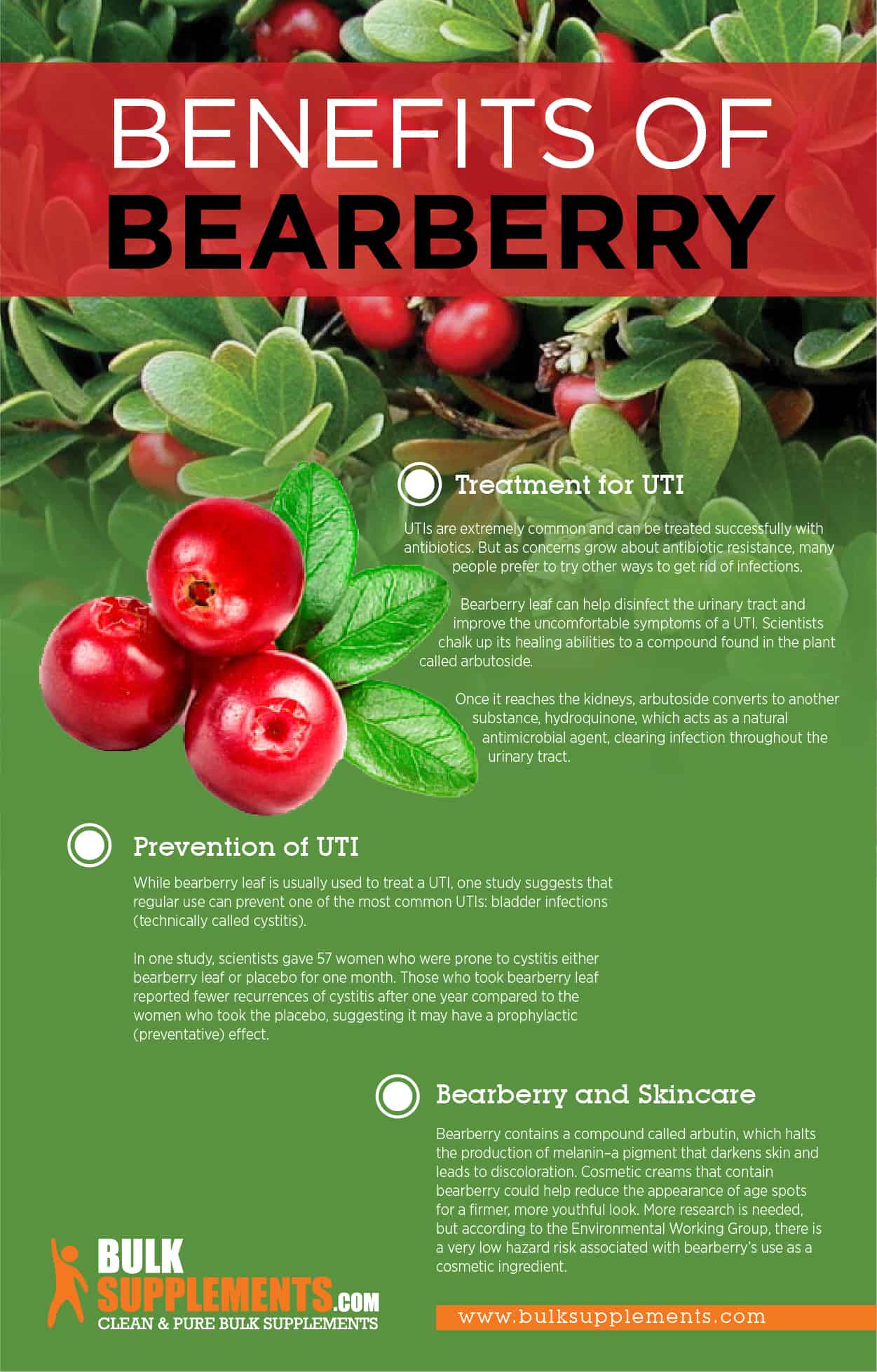 With scientific advancements, we can now grow and harvest plants to ensure they contain a certain amount of specific, beneficial compounds. This is called standardization.

Standardization ensures the herbal extracts you take are safe and effective. For example, we know that the compound arbutin is responsible for many of bearberry’s benefits. Just like some strawberries are sweeter than others, bearberry leaves in the wild can contain different amounts of arbutin, which means there’s no guarantee that you’ll get a consistent amount of arbutin if you eat wild bearberries.

This is where standardization comes in: it ensures that the bearberry extract you take contains just the right amount of arbutin shown in scientific studies to have therapeutic value.

Bearberry Leaf Side Effects and Dosage

Because taking bearberry leaf over an extended period of time may result in liver damage, don’t take this supplement for more than a week at a time without taking a break. If you have a history of kidney, liver, or digestive problems, talk to your doctor before taking bearberry, as it could worsen these existing conditions.

The hydroquinones in your bearberry leaf supplement may tinge your urine green, but don’t worry–this is a normal side effect and isn’t dangerous.

Side effects may include mild gastrointestinal issues like nausea, vomiting and stomach upset; some may experience dizziness, insomnia, increased heart rate and general irritability.

Severe side effects (usually caused by exceeding the recommended dosage)  include trouble breathing, temporary tinnitus, convulsions, delirium and even collapse.

Don’t take bearberry if you’re nursing or pregnant, and don’t give bearberry to children without first talking to a physician.

Bearberry extract may be a promising alternative to antibiotics for treating urinary tract infections. It also help naturally brighten and rejuvenate your skin. This powerful little herb might not be as well-known as others, but it’s just as effective in boosting your overall health.