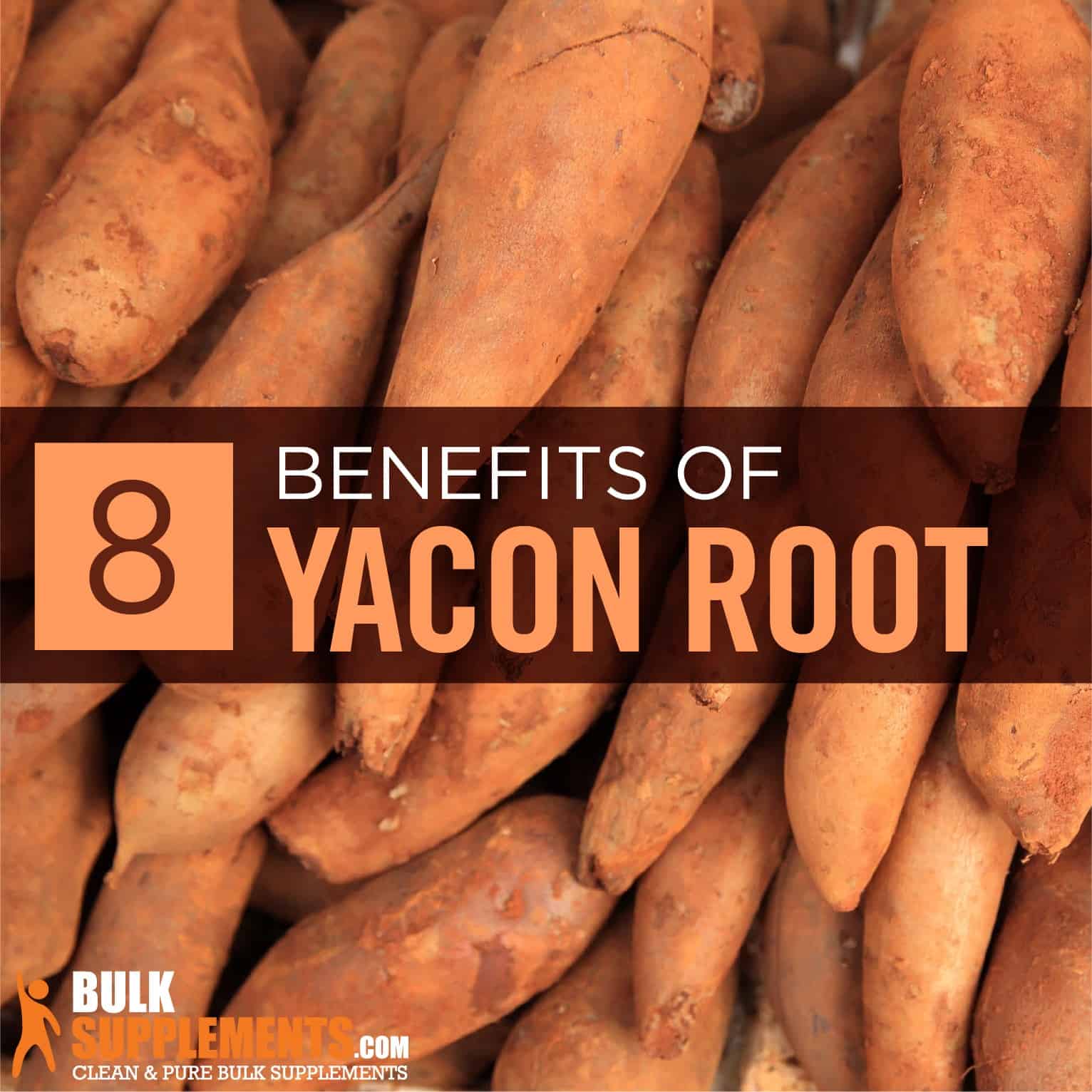 What is Yacon Root?

The yacon is a perennial root vegetable that is indigenously grown in parts of South America, including Columbia, Northern Argentina and Central Andes. It is naturally sweet and closely resembles a sweet potato. The root is scientifically referred to as Smallanthus sonchifolius. It is also locally known as the Peruvian ground apple, possibly derived from the French name for a potato.

The yacon has a texture and taste similar to that of an apple. It is sweet and, as some would say, it has a flowery taste. This is essentially what made it popular before even its health benefits were realized. Scientific studies have revealed that the root has low nutritive value but is very high in fiber, which makes it still useful in the food industry as one of the plant-based sweeteners (x). It is eaten raw, cooked, made into juice, used in salads, extracted for syrup and even fried to make yacon chips.

The yacon plant characteristically has large leaves shaped like arrows. The daisy-like flowers look like sunflowers, but are much smaller. The tubers grow in a variety of colors, including yellow, orange, white, pink and purple. The plant is resistant to pests and drought and can be grown virtually anywhere, as long as it is not too cold. It actually produces two types of tubers; the red rhizomes that grow closer to the surface and are re-planted for more yacon, and the larger tubers that are found deeper — these are the ones eaten.

The sweet-tasting component of the yacon root is a carbohydrate known as the fructo-oligosaccharide. It is an insoluble fiber that makes the root a desired probiotic.

Benefits of the Yacon Root

The yacon root is of very low nutritive value, save for its high content of fiber and the low-calorie starch (x). This makes it an excellent option for those who are looking to lose weight, and researchers agree.

The first reason why yacon for weight loss is a good idea is that the root makes one full quite quickly. This will last a while and help you avoid regular eating, which contributes significantly to weight gain. This is because the yacon root contains very high levels of fiber, which slow down digestion (they are not digested) and keep you feeling full (x).

The starch found in the tuber contains meager amounts of calories. This, together with the fact that it is very sweet, makes it an ideal pleasure food with absolutely no guilt. You can have as much of the sweet and crunchy delicacy as you want without worrying about your calorie intake. This property has actually aroused scientific interest in its ability to treat obesity (x). The anti-obesity effect observed in this test was thought to be the result of the short-chain fatty acids produced by the gut bacteria after consuming fructans, some of the compounds contained in the root.

The probiotic carbohydrates contained in the yacon root are very helpful in maintaining healthy digestive health. They help to stimulate, increase and maintain the good health of the good bacteria in our guts. These bacteria help to break down food for easier absorption. They also help maintain a healthy immune system by protecting us against hostile disease-causing bacteria (x).

In a scientific study to prove this, 16 healthy participants were administered with 20 grams of the root daily in a two-week cross over design. The study was double-blind with a placebo group. At the end of the study, the group under study showed significant improvement in their digestion. Their stool was observed to be softer, and the frequency also increased. There were no significant side effects — bloating was observed in both groups, but was a bit more rampant in the one under study (x). Even if more studies are needed to illustrate this particular benefit clearly, this shows that the yacon root could be potentially beneficial in treating constipation and other related digestive problems.

In 2011, a similar study was published in the Trends in Food Science & Technology journal. The same findings were realized and discussed, with the yacon root recommended for people struggling with constipation, low probiotics and associated problems (x).

Seeing as the yacon root sugars are neither digestible nor absorbable, it is regarded to have significant anti-hyperglycemic properties. It has, therefore, been adopted widely all over the world and incorporate into diets, especially by diabetic people.

Diabetes is a condition that arises when there is too much glucose in your blood. Insulin, produced by the pancreas, helps the body absorb it, but sometimes too little or none of it is produced. This results in an accumulation of glucose, which ultimately leads to diabetes (x).

With so much sugar in the blood, diabetic patients are advised to avoid foods that could add more to it. This mostly means eating bland and sugarless foods and avoiding some of the most readily available carbohydrates.

However, according to studies, not only does yacon for diabetes lower glucose production in the body, but it also helps the body convert to lower fasting glucose rates. This ultimately lowers the sugar level and consequently reduces the diabetic toll on patients (x). This was confirmed in a study involving diabetic rats, which concluded that the tuber was indeed effective in reducing the levels of blood sugar.

There are two major types of fats — the good and bad fats.

The good fats, also known as the unsaturated fats, usually occur naturally in plants and lower the risk of developing diseases. They are widely found in vegetable oils such as olives, coconut and canola. Bad fats, on the other hand, are also referred to as trans fats and significantly increase the risk of not only adding weight, but also suffering related diseases. They are mainly found in processed foods and are obtained through partial hydrogenation of oil. These can quickly increase the chances of getting such diseases even when consumed in low amounts (x).

The bad fat also contains bad cholesterol, and if it is left to accumulate in the body, it ultimately leads to a myriad of diseases, including heart problems.

The non-digestible carbs in the yacon root help to reduce these bad fats in the body by lowering their levels and prevent their accumulation. This ultimately improves heart health and reduces the risk of suffering cardiac problems, including the dreaded heart disease (x).

If you take too much sugar, only a little is converted to glucose for the energy needs of the body. The rest is stored in the liver in the form of fat. A fatty liver is slow as the fat weighs it down, and it is unable to perform its normal functions efficiently (x).

Yacon root, when taken with milk thistle, helps to prevent fatty liver disease. It also reduces the amount of glucose to be processed by the liver, making its work easier (x).

The yacon root contains substantial amounts of the mineral potassium, which works wonders in lowering the blood pressure.

Potassium is a vasodilator agent, which means that it helps the blood vessels relax. When they are tense, the blood passage becomes narrower, and blood is pumped under higher pressure. When they relax, blood flows through a wider channel with lower pressure. When blood is flowing at a healthy rate, the heart does less in pumping it, and your chances of suffering heart attacks and strokes reduce (x).

Oxidation in the body is a process that results in the formation and release of free radicals, which trigger chain reactions that may destroy the body cells. Antioxidants slow down or stop the oxidation process, helping to prevent or slow down the effects of diseases such as heart disease and even cancer.

The yacon root is rich in fructooligosaccharides and phenolic compounds, some of which are antioxidation agents. The yacon peel flour is particularly rich with these compounds, and studies suggest that it could help slow down or stop the degenerative processes caused by the free radicals in the body that result in oxidative stress (x, x).

As discussed earlier, the yacon root has a sweet, crispy taste that is similar to that of an apple. This is because of the high amounts of fructooligosaccharides and phenolic compounds present. The carbs have low cholesterol levels and have vasodilation properties, which helps them lower blood pressure when consumed (x, x). Coupled with the fact that they have great probiotic qualities and high amounts of fiber that ease digestion, they have become a much-used natural food sweetener. They are quickly gaining popularity in the food processing industry.

The sugar content of the yacon syrup has made it particularly popular as a sweetener. It is extracted pure and unprocessed using the root’s water. In that form, it can be added to pretty much anything and ultimately sweeten it. It is even ideal for people with diabetes, as the sugar contained is indigestible.

Side Effects of the Yacon Root

When taken in routine and regular amounts, yacon root extract has practically no side effects.

In excess, however, one is likely to observe any of the following:

People with an intolerance to FODMAP fibers should steer clear from the root. It contains fructans in high amounts and could worsen the situation, especially for people with digestive disorders such as irritable bowel syndrome.

As a useful tip, the yacon root syrup can be added to food to sweeten it, but should not be used in baking or cooking at high temperatures. This is because the heat will break down the structure of the active carbs and basically render it useless as far as your health is concerned (x).

The yacon root is a perennial tuber grown in parts of South America. It is a pest and drought-resistant crop that characteristically exhibits flowers similar to sunflowers and large green leaves. The root contains high levels of fiber fructooligosaccharide that is indigestible and insoluble. It is the active component, and studies have been conducted to establish its health benefits.

Some of the most popular health motivators of using the root include managing and cutting down weight, control of diabetes, lowering cholesterol levels in the body, lowering blood pressure, improving digestion and reducing oxidation in the body. The root is also used as a natural sweetener, usually in the form of its syrup. Other yacon supplements are available even in the form of pills and even juice.

The yacon root exhibits no significant side effects when taken in reasonable amounts but could cause digestive problems when consumed in excess, and by people with digestive disorders.