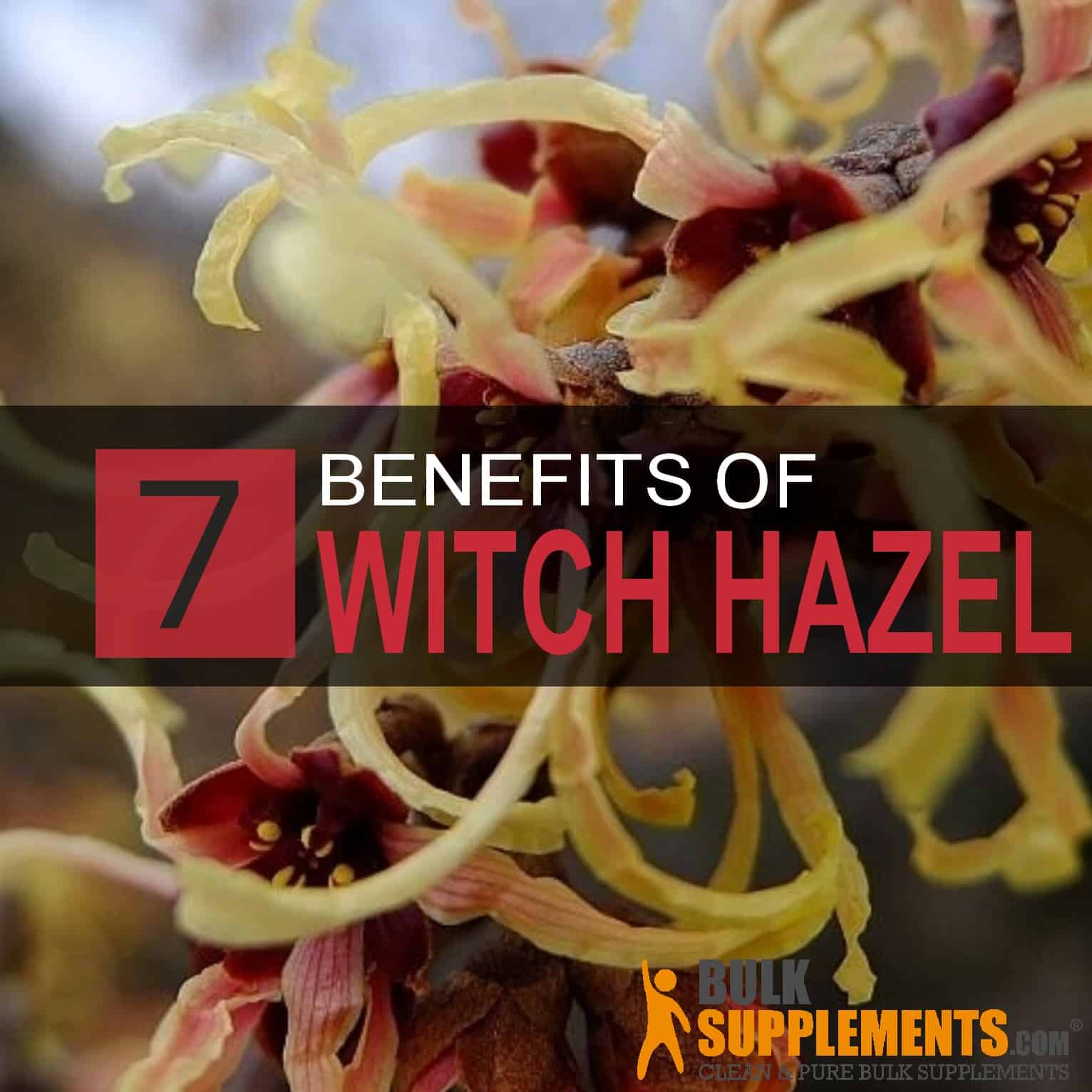 The name “witch hazel” may sound like an ingredient meant for a potion when it’s actually just an ordinary flowering plant.  Witch hazel is most famous for its benefits to the skin but has also been used to treat cancers, colds, fevers, and even tuberculosis (x).  Studies have found such active components as flavonoids, tannins, and oils that provide witch hazel’s astringent action (x).

Keep in mind that while popular culture depicts witch hazel positively, there isn’t a lot of solid, conclusive evidence as to these benefits.  If a patient wishes to use it to treat a chronic condition, consulting a doctor first is highly recommended.

What is Witch Hazel Extract?

Witch hazel is a flowering plant called hamamelis from the plant family Hamamelidacaea that grows small yellow flowers with long, noodle-like petals.  The leaves are deciduous (they shed in colder weather), but will stay on the plant long into autumn (x). The extract comes from boiling and then straining the leaves or the bark of witch hazel.

What is Witch Hazel Used For?

Witch hazel’s ability to bloom even in winter fascinated Native American tribes.  But besides being beautiful, the plant served several different purposes to Native tribes, such as treating sores and sore muscles (x).  The leaves, bark, and twigs are used for these purposes (x).

True to its name, some people think it can heighten occult powers and is used by many modern witches as a magical herb.  Witch hazel twigs have been similarly used for dowsing, a magical method for finding underground water (x).

Most often, it is used to treat inflammation and skin problems, sold as creams, astringents, ointments, and salves.  Some people use it as a toner after cleansing, which supposedly cleanses and cools the skin and tightens pores.  It might even be used in hair care products to protect the scalp (x).

The most famous health benefit of witch hazel is its soothing, calming effects on the skin.  Its astringent properties supposedly help to cure oily skin and help prevent breakouts.  Some people wonder whether witch hazel extract is good for skin, though.

A 2014 study from the Journal of Clinical and Aesthetic Dermatology tried to narrow down the active ingredients of the highest-rated ance treatments, and witch hazel was among the most commonly found, alongside aloe vera (x).

Similarly, witch hazel was tested in 2002 by the Institute for Dermatological Research and Development.  The study looked at three different ratios of it in lotion, and the higher the amount of it, the greater anti-inflammatory properties were observed (x).

While not as powerful as other herbal extracts, witch hazel has some antioxidants, and can potentially relieve oxidative stress.  A 2011 study published in the Journal of Inflammation looked at the antioxidant properties of three herbal extracts, including witch hazel, white tea, and roses.  All three extracts showed a decrease in enzymes produced by oxidative stress.  More research is needed to thoroughly determine it’s antioxidant abilities (x).

A 2008 study from the Institute for Chemical and Environmental Research found that witch hazel extract protected red blood cells from free-radical-induced hemolysis (destruction of red blood cells), as well as inhibit the growth of skin cancer cells (x).

May Ward Off Viral Infections

According to some studies, witch hazel bark extract may even be effective in protecting against viral infections.  That’s because plant extracts rich in tannins have been proven to have antiviral properties.

A 2014 study from the Institute of Immunology in Luxembourg tested witch hazel bark extract against viral strands of Influenza A and HPV.  The extract was able to inhibit the early stages of these viruses.  Higher and lower molecular compounds of the extract performed differently, but an average molecular compound might be positively correlated with receptor binding inhibition.  On the whole, more research into the matter needs to be done to reach a solid conclusion (x).

Similarly, witch hazel extract was tested against Herpes simplex virus type 1 (HSV-1) in mice, which is supposedly a cause for cold sores, and the extract successfully inhibited the virus’ growth (x).

Witch hazel may also help treat hemorrhoids, which are swollen blood veins in the rectum and anus that, when stretched, might get irritated and cause itching and bleeding (x).  Many health stores sell wipes or swabs soaked in it to specifically treat this condition, even though research on its effectiveness is limited.

Several herbal extracts, including witch hazel leaf extract, have been shown to improve microcirculation and capillary flow, as well as strengthening the perivascular amorphous substrate (x).

Sometimes the scalp becomes irritated, whether through use of certain hair-care products or natural skin conditions.  Applying it to the scalp might help relieve irritation, dryness, or tenderness, especially before washing.  Once again, more solid evidence is needed to conclude the effectiveness of a treatment on the scalp area.

A 2014 study from the International Journal of Trichology looked at whether a witch-hazel based shampoo would be effective at treating a sensitive scalp.  For over three years, 1,373 patients applied the shampoo, and at the end of the study, reported improvement of irritation as well as good to excellent tolerance of the product (x).

Because of witch hazel’s inflammatory properties, some people use it as a cooling agent on rashes.  There is not a lot of evidence to prove this treatment’s effectiveness, but witch hazel should not be applied where the skin is broken or oozing.

A 2006 study from the European Journal of Pediatrics compared the effects of it on children’s skin to those of dexpanthenol ointment, a common skin disorder medication.  Overall, the two medications performed similarly to each other, and there were no adverse effects to their uses (x).

A 1998 study from the Institute for Dermatological Research and Development looked at the anti-inflammatory effects of it in aftersun lotion.  Thirty healthy volunteers were treated with irradiation on their back areas, and chromametry technology determined the degree of erythema (reddening of the skin) in those areas after witch hazel treatment.  The results showed roughly 27% suppression of erythema after 48 hours of treatment, compared to the 11-15% suppression of other lotions tested (x).

Fortunately, the extract uses include treating sensitive skin for sunburn or irritation.  A 2015 study from the Clinical of Cosmetic and Investigational Dermatology investigated the properties of a lotion that claimed to be safe for sensitive skin, and witch hazel was among them.  The lotion was in fact found to relieve certain skin conditions even on sensitive skin (x).

Because witch hazel is most often used on the skin, slight allergic reactions have been reported (x).  It’s a good idea to test the product on a small patch of skin first, and if there is no reaction, it is likely safe to use.

There are also conflicting opinions on whether it is safe to ingest.  Some suggest only a few tablespoons, while others say it should not be taken at all.  This is because information on the tannins’ toxicity levels has not been narrowed down (x).  There is anecdotal evidence of it being gurgled in warm water to soothe a sore throat, but caution must still be exercised before doing do.

Keep in mind that some witch hazel products contain alcohol, which can irritate or dry out the skin if used too much.

How to Take Witch Hazel Extract

Organic witch hazel is available in most drugstores and grocery stores, as well as online.  Most of the time, it comes in a distilled liquid form, and both alcoholic and non-alcoholic formulas are available.  Patients can even look for medicated pads or wipes that contain it.

Because of the potential toxins contained in the tannins of witch hazel, exercise caution when consuming it orally.  Consuming it is not fatal, but may cause stomach irritation and vomiting may occur (x).  Consulting a doctor before internal use is highly recommended, if not vital.

When applying it as a topical treatment, lightly soaking a small cotton ball or wipe is all that’s necessary.

Where to Buy Witch Hazel Extract

Are you interested in testing witch hazel supplements for its skin-healing and potential antiviral abilities?  Contact BulkSupplements.com to place an order today.

Witch hazel might not literally be magical, but it may have some benefits for the skin, especially for rashes, sunburns, or oily skin.  More evidence is needed to conclude whether it can treat viral or cancerous activity, but animal tests have proved promising so far.  There are conflicting opinions on how much is safe to consume orally, but patients should always speak to a doctor before treating a chronic condition.