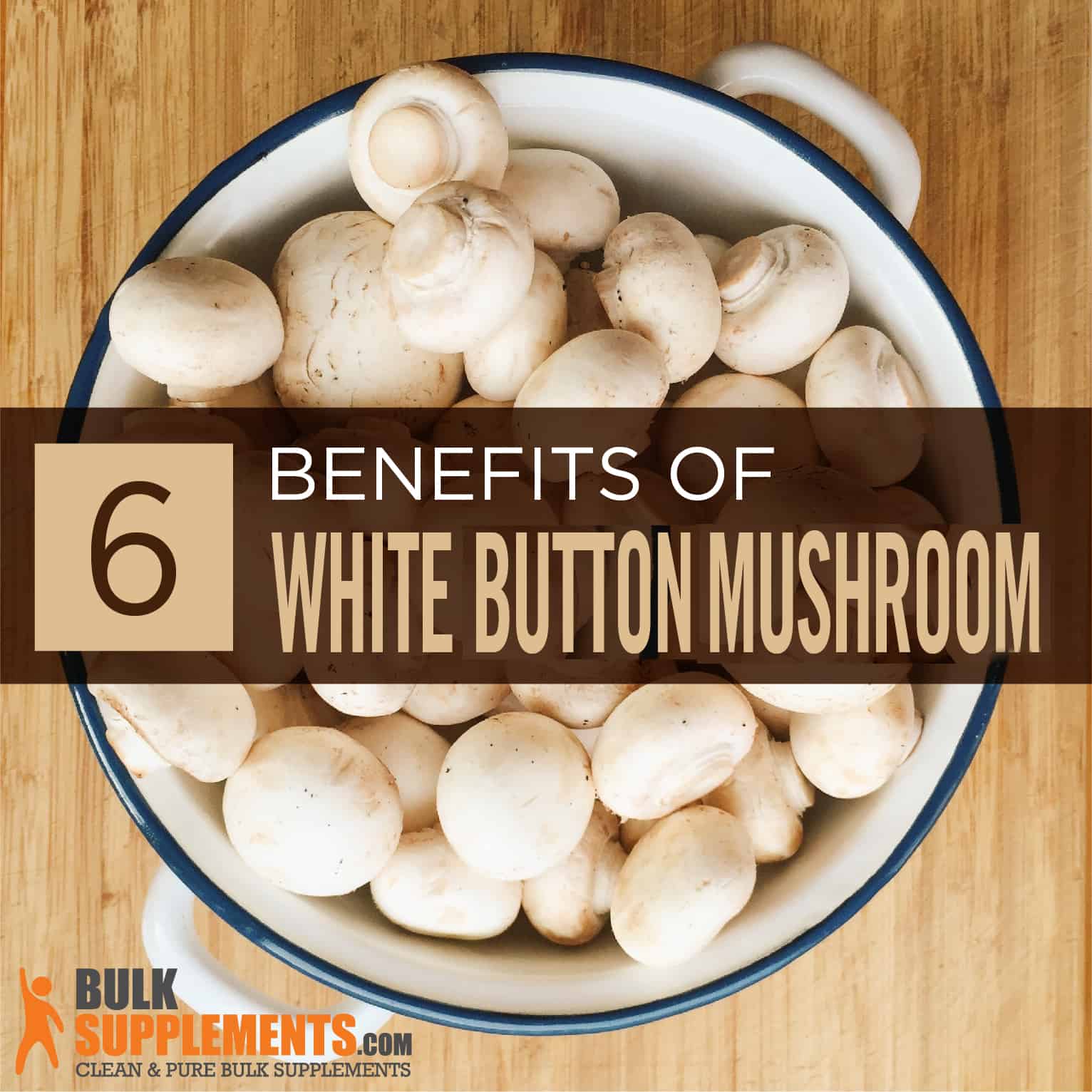 What is White Button Mushroom Extract?

If you spend a lot of time in the kitchen, you’re likely to have encountered a white button mushroom. The white button mushroom is one of the most common mushrooms native to both Europe and North America. But what you may not know is that they are actually the immature or “baby” forms of adult Portobello mushrooms.

Our heart is responsible for keeping our blood pumping through our body, bringing oxygen to our muscles and organs and letting our body do all the complex operations that it needs to achieve. As such, it’s important that we eat foods to boost our heart — like white button mushrooms.

One study published by Keith R. Martin in Nutrition Journal in 2010 showed that white button mushroom extract supplements, among other mushroom extracts, “consistently reduced” the binding of monocytes to human aortic endothelial cells (in other words, the cells lining the inside of the aorta, in your heart) (x). When monocytes bind to the molecules inside our arteries, this merge can cause blockages that lead to a wide range of cardiovascular diseases. As such, the same study revealed how a white button mushroom extract supplement could be helpful in preventing those diseases.

Just as our cardiovascular system helps keep everything flowing along internally, our immune system protects us from external threats like viruses and bacteria (as well as internal ones, in the cases of infection or illness). Although it goes without saying, keeping our immune system healthy is vitally important to sustaining our longevity and overall sense of well-being. Once again, white button mushroom supplements come in handy.

Research published in the 2007 Journal of Nutrition studied the immunological effects of white button mushroom supplements on the diets of mice (x). The results showed that the supplementation increased the number of natural killer (NK) cells, along with IFNgamma and TNFalpha, two proteins involved in immune system regulation (the latter are directly involved with fighting tumors). The researchers concluded that an increased intake of white button mushrooms could boost immunity to a range of tumors and diseases. Still, the research doesn’t stop there.

Although we all hear how antioxidants in our food are good for us, we don’t always understand why. For those who are unclear, oxidative stress is a process by which our cells react with reactive oxygen species (ROS). Though ROSs are important, when our ROS levels get too high our cells can become damaged. This leads to a host of health issues that can include cancer, atherosclerosis, depression and much more. More specifically, ROSs are also sometimes called free radicals. Though these molecules are important, they can cause damage if left unchecked, which is where antioxidants come in. Fortunately, white button mushrooms are jam-packed with antioxidants.

In research published in Food and Chemical Toxicology (2013), researchers studied the antioxidant activity of white button mushroom extract on immune system function through in vitro and in vivo methods (x). Like the other research, scientists used mice and gave them an extract for 30 consecutive days. At the end of the experiment, the study showed significant enhancement of antioxidant enzyme activity.

As already mentioned, white button mushrooms have high levels of antioxidants that could prevent various kinds of cell damage. In fact, they also demonstrated an anti-cancer effect in a range of studies. In one phase of the trial study published in Cancer in 2015, researchers studied its effect on subjects who had recurrent prostate cancer (as measured by prostate-specific antigens (PSAs) (x). While the study was small, the results were promising. Of the 36 clients treated, two had their PSA levels drop to undetectable levels that persisted for 49 and 30 months, respectively. Two other patients had a partial positive response and, overall, 36 percent of patients saw a drop in PSA below baseline. While the results may be preliminary, the scientists concluded that white button mushroom supplements certainly had an impact on PSAs that was worth further study.

Another study in Experimental Biology and Medicine published in 2010 analyzed the effect of various mushroom extracts on women with breast cancer (x). Although the results varied by the various specific mushrooms tested, all the extracts tested “significantly suppressed” the proliferation of the human breast cancer cells in the study. As always, more research is required to see exactly why and how these extracts work the way they do. Still, the initial results are promising and seem to show that mushrooms have some broad chemoprotective effects.

A study published in Nutrition Research in 2015 tested how white button mushroom supplements affected the mobility and memory of older rats (x). After subjecting the rats to all manner of different tests, the researchers found that a 0.05 percent mushroom diet (equivalent to 1.5 ounces of fresh mushrooms a day for humans) produced significant improvements in balance and working memory. As such, the study highlighted that including a white button mushroom supplement in our daily diets could diminish age-related declines in cognitive and motor functioning. As mentioned before, antioxidants can cause all kinds of damage to our bodies, including our brains. Perhaps it’s not surprising, then, that mushrooms could give our brains an antioxidant boost.

A study in Microscopy Research and Technique published in 2012 illustrated that white button mushroom extract supplements could even have benefits for our skin. Using mice once again, the study examined how the extract could affect angiogenesis (growth of new blood vessels) in damaged tissue, among other things (x). Ultimately, the research showed a significant increase in VEGF, a signal protein responsible for stimulating blood vessel growth, at the damaged sites. More research is necessary, but the results are still promising.

As a dietary supplement, the FDA has not set specific guidelines for the use and consumption of white button mushroom extract supplements. Generally speaking, these supplements are widely considered safe and do not cause any serious side effects (outside any potential allergic reactions). Some other side effects reported from eating dirty or old whole white button mushrooms may include upset stomach, nausea or diarrhea (x). These side effects may be exacerbated by taking more than a recommended dose.

As with all supplements meant to promote general well-being, it is important to note that a supplement such as this is by no means a substitute for legitimate medical advice. It is always best to talk to a doctor if you are experiencing problems with your health before taking any supplements.

While white button mushroom extract is not a core nutrient or vitamin like calcium or vitamin C, it remains an incredible boon to our health by virtue of its immune system-boosting benefits. As a supplement drawn from a natural source, anyone who consumes it likely won’t have to worry about contraindications with other medications or supplements when following the supplement guidelines (as always, contact a physician before proceeding). The white button mushroom extract can potentially give users a burst of antioxidants and may also confer some protection against some kinds of cancer, as well as against cognitive decline. Although research remains to be done on all its mechanisms, these supplements are generally safe and affordable and worth working into your present regimen.