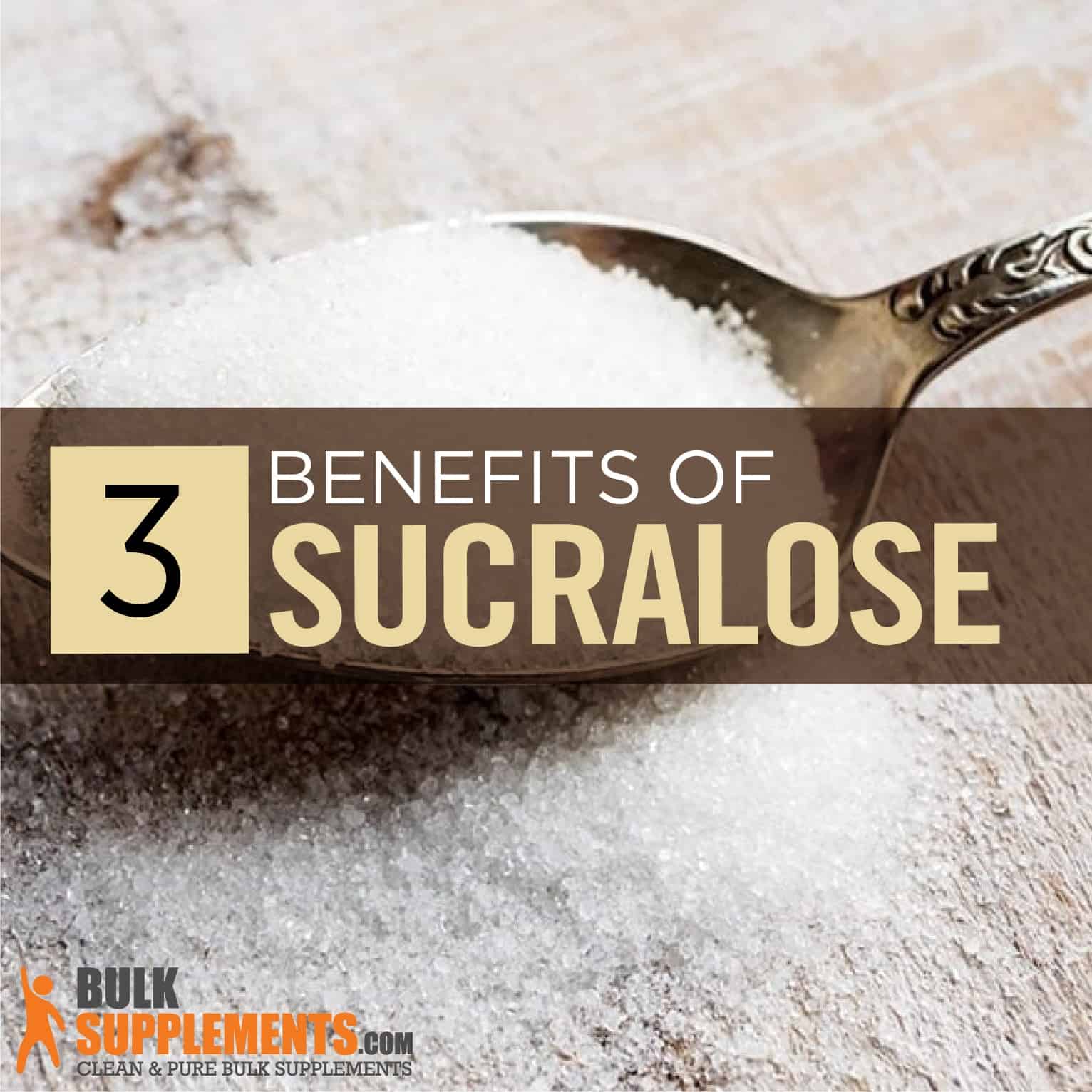 You may know sucralose sweetener by a more common brand name, Splenda. Those little yellow packets you can find on tables in restaurants and cafes across the world contain a substance called sucralose, a very common artificial sweetener that may be a great alternative for those who are trying to cut down on their calories or sugar intake. What makes sucralose a great sugar alternative option is that it typically does not cause the same negative side effects as table sugar, such as spikes in blood glucose.

Sucralose is made from a process that begins with regular table sugar (sucrose), but it is technically not sugar. Most likely, you’ve seen or maybe even used sucralose in the past without even realizing it.

Food manufacturers include sucralose in a variety of foods to create a sweet taste while avoiding high sugar content. Common products may include chewing gum, canned fruit, syrups, dairy products and condiments. Since sucralose is stable at high temperatures, it can also be used in baked goods. Even though sucralose is pretty similar to real sugar, food with sucralose will likely have a slightly different flavor or texture than those made with regular sugar (x).

What is Sucralose Sweetener Made from?

Even though it contains no regular sugar and is considered a sugar alternative, sucralose is actually made from regular table sugar and reacts with the chemical chlorine. Three of the hydrogen oxygen groups on the sucralose molecule are replaced with three chlorine atoms. This change in molecular structure is what makes sucrose its own substance and gives it its properties. The process results in a stable artificial sweetener that tastes similar to sugar, but is lower in calories and does not cause blood sugar spikes (x).

The sweetener was originally discovered in 1976 by researchers from Tate & Lyle and Queen Elizabeth College in London. The scientists discovered that they could modify the structure of sugar to increase its sweetness and reduce calorie count (x).

How Does Sucralose Affect the Body?

The biggest difference between sugar and sucralose is that sucralose is much sweeter and has a lower calorie count, making it a healthier alternative. According to research, sucralose sweetener may have several different positive effects on the body, including:

We reached out to Dr. Yelena Deshko, ND for more information on how sucralose affects the body. Dr. Deshko is a general family practitioner specializing in integrative oncology, anti-aging and hormonal health. Her practice consists of traditional and conventional medicine. Dr. Deshko is the founder of Timeless Health Clinic in Toronto, Canada.

The mechanism behind these potential benefits is the fact that the body does not absorb sucralose like regular sugar. According to Dr. Deshko, the body does not metabolize sucralose, “meaning it passes through your body undigested and thus doesn’t provide calories or carbohydrates.” So it typically does not cause the damage that sugar may cause.

However, although there is research to support these claims, there is no medical or scientific evidence stating that sucralose can definitely treat or prevent any diseases or health conditions on its own. Consult with your doctor before using sucralose or any other supplement.

Unlike regular sugar, the enzymes in the digestive tract cannot break down sucralose because of its unique structure. Usually when you consume food, the digestive system breaks it down and uses it for energy. But in fact, Dr. Deshko states that the body only absorbs about 15% of sucralose and the gut bacteria cannot absorb it or use the other 85% for energy, so it typically does not add any extra calories (x, x).

Like we stated before, the body does not completely absorb sucralose and fails to recognize it as a sugar or a carbohydrate. When sugar enters the body, the pancreas produces insulin to control blood sugar. If blood sugar levels get too high, the body can develop insulin resistance and fail to produce enough insulin to control them. Instead of absorbing it, the body begins to store it in fat cells. This can increase the risk for weight gain or obesity and other risk factors for metabolic syndrome (x).

This is extremely important for patients who suffer from diabetes, characterized by very high blood sugar levels. But according to research, sucralose sweetener does not spike blood sugar levels because the body does not absorb it, like we mentioned before. Research has concluded that sucralose may be an effective alternative for diabetics and may contribute to better glycemic control (x, x, x).

However, individuals who may be at risk for diabetes should be mindful of their food and beverage intake, including sources with artificial sweeteners. It’s best to discuss nutrition with your doctor before using sucralose as a sugar alternative.

In addition, sucralose may not contribute to tooth decay and other dental problems, unlike table sugar. We all know that sugar isn’t great for your teeth. But sugar isn’t what causes the damage; it’s actually the oral bacteria that break down the sugar. Dr. Deshko claims that “because it cannot be metabolized by bacteria that reside in the mouth, it does not promote tooth decay the way regular sugar does.” Because of these properties, it is a common ingredient in oral health products, such as chewing gum (x).

Avoiding added sugars is a necessity for a ketogenic diet, so that’s an important question. The goal of a keto diet is to keep the body in ketosis, a state your body naturally reaches to break down fat into energy (x).

Even though there is research that seems to support these potential benefits, there is no evidence that it can treat or prevent any health condition on its own. It’s important to consult a physician before you try sucralose as a sweetener.

How to Take Sucralose Sweetener

You can take sucralose by simply adding it into your food or beverages, such as coffee or tea, using it just like regular sugar. Basically, you can substitute sucralose wherever you would use table sugar.

The recommended dosage for sucralose powder is 30 mg per serving. But individual tastes may vary. Make sure to consult a doctor before you start using sucralose sweetener.

Is Sucralose Safe? What are the Side Effects?

Sucralose is generally considered a pretty safe alternative to regular table sugar, but there are still a number of side effects that it may cause from overuse or individual sensitivity. These potential side effects are not too major, but they are still something to be aware of:

Sucralose may also pose a risk during pregnancy or breastfeeding. It could also potentially have an adverse effect on people with diabetes or low blood sugar and reduce blood sugar too much. To be safe and potentially avoid these side effects, talk to your doctor and make sure sucralose is the right choice for you (x).

Where to Buy Sucralose Powder

Are you interested in trying sucralose as a food additive and sugar alternative to potentially prevent spikes in blood sugar, maintain dental health and support digestion? Contact BulkSupplements.com to place an order today.

Sucralose is an artificial sweetener made from regular table sugar. It’s a common ingredient in many food sources and products, including chewing gum, canned fruit, syrups, dairy products and condiments. The body does not recognize it as a sugar or a carbohydrate, so it does not absorb into the bloodstream like table sugar. Research states that sucralose may not negatively affect oral health or blood sugar. The artificial sweetener may be a healthy alternative for those with diabetes or other health concerns.

Opting for food and drinks with low-calorie sweeteners such as sucralose can be an effective way to control your sugar and calorie intake, which are two essential components to maintaining a healthy diet and lifestyle. However, it’s important to consult a doctor before you use sucralose as a supplement because it can cause side effects, even though it may have a positive effect on your health.

**These statements have not been evaluated by the Food and Drug Administration. These products are not intended to diagnose, treat, cure or prevent any disease.