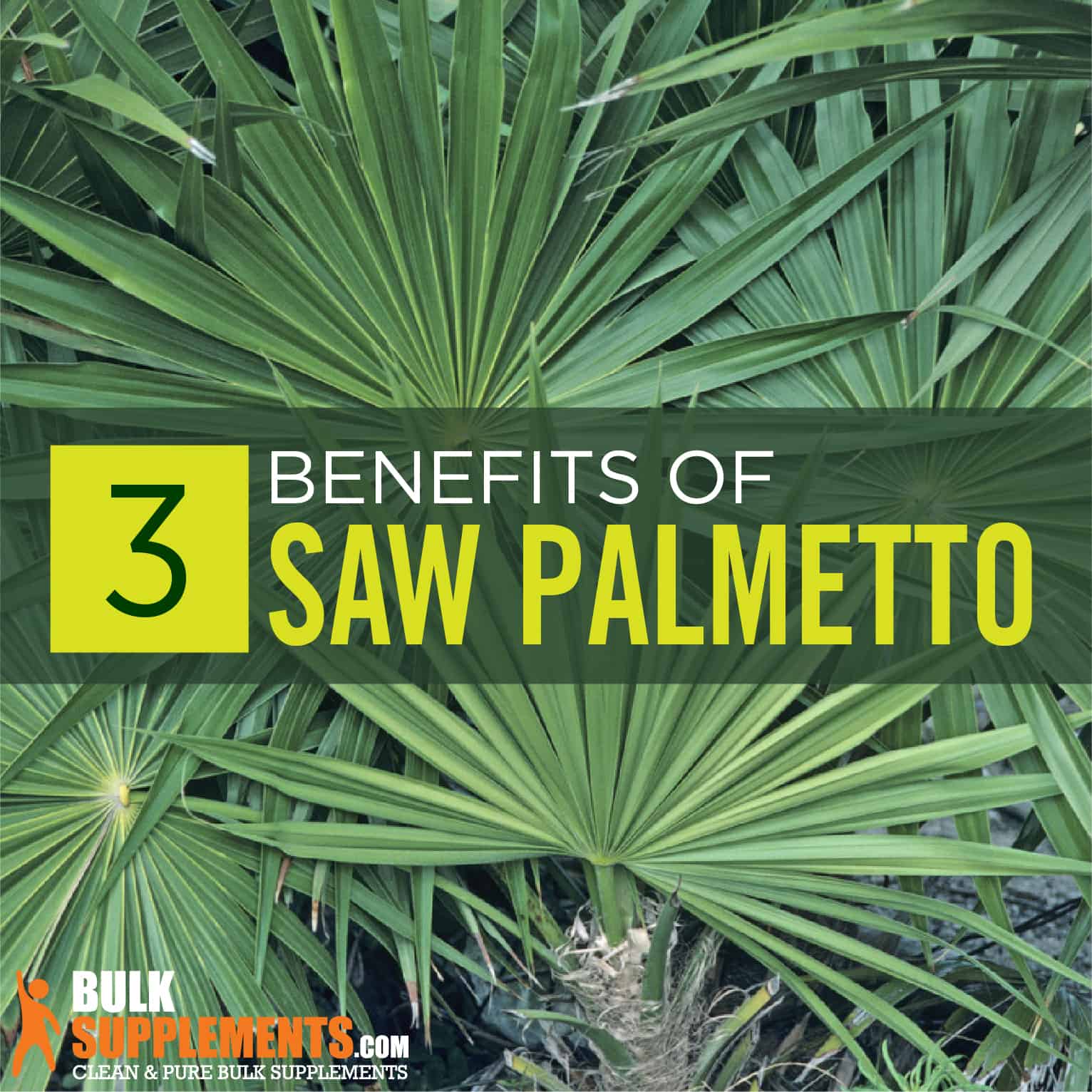 What is Saw Palmetto Extract?

Saw palmetto extract comes from the palm tree plant with the latin name Serenoa repens. It grows naturally in places like Florida and southern California and is now cultivated heavily there for commercial purposes. Native American groups like the Seminole Tribe in Florida have long been using saw palmetto therapeutically for urinary tract issues, cough and male infertility.

Saw palmetto is a rather slow growing plant that often grows in clumps. It is a multi-trunked palm that only grows to be about five to ten feet tall, but can also spread out to be as wide as ten feet. Most commonly, the leaves of this palm are green, but some variations have been found to be a blue-silver color. Every spring, the saw palmetto plant flowers by sprouting stalks up to three feet with yellow-white flowers. These flowers are soon followed by small, yellow berries that will not turn black and ripen until the following fall (x).

As far as herbs go, saw palmetto is a relatively well-researched one. Studies date back to the 1800s that attempt to demonstrate its beneficial effects on prostate and urinary health. The value of the older studies, as well as some of the newer ones, are sometimes called into question. Some argue that studies around saw palmetto were either too small, of poor quality or used inconsistent concentrations of the herb (x). That said, other reviews of the research draw a different conclusion — that saw palmetto can be effective for some people thanks to the activity it exerts on male hormones and its anti-inflammatory properties (x).

Saw palmetto is used as a natural treatment for a benign prostatic hyperplasia (BPH), also known as an enlarged prostate. This condition is quite common among men, particularly as they age. In fact, most men over the age of 50 have prostate enlargement to some degree. It’s caused by changes in hormone metabolism, specifically the increased conversion of testosterone to dihydrotestosterone.

BPH isn’t necessarily harmful. It can, however, cause very annoying and inconvenient symptoms including frequent urination, waking at night to urinate (nocturia), and inability to fully empty the bladder. Bacterial infections in the urinary tract can also develop (x).

Studies show that saw palmetto can reduce the symptoms of BPH in some people. This may be because it helps slow the conversion of testosterone to dihydrotestosterone (DHT). It also acts as an anti-inflammatory. France and Germany have even approved a trademarked saw palmetto product called Permixon for treatment of this condition (x).

A review of studies published in 1988 concluded that the extract can be as effective as pharmaceutical drugs for improving urinary function in cases of BPH. What’s even better is that study participants did not experience the troublesome side effects of the drugs which include sexual dysfunction (x).

Another review of research from 2000 asserted that saw palmetto is one of the most effective and well-tolerated phytotherapies for BPH (x).

Not all research demonstrates the efficacy of saw palmetto for BPH (x, x). However, given its low side effects and safety, it may be worth a try.

We know that saw palmetto can have an effect on male hormone balance. Specifically, it can help slow the conversion of testosterone to dihydrotestosterone (DHT). This relates to hair loss because it’s this conversion of hormones that is partly responsible for male pattern baldness, which, despite the name, can also affect women. Saw palmetto may also work by discouraging hair follicles from taking up as much DHT that is circulating in the body (x, x).

Studies show that herbs that inhibit the formation of DHT like saw palmetto are effective ways to both prevent androgen-related hair loss and regrow hair (x, x).

It would seem that saw palmetto is only a beneficial supplement for men, but women might benefit from it too. Women also have androgens (male sex hormones) but to a lesser degree. As a result, they can also experience problems with excessive DHT.

There is very little research specifically involving the effect of saw palmetto on women. However, it is being investigated for its potential to help with hormonal imbalances. Excess androgens like DHT are related to conditions like hair loss, polycystic ovarian syndrome (PCOS), hirsutism (excess hairiness) and acne (x).

Saw Palmetto Extract 320 mg Softgels: As a dietary supplement, take 1 softgel daily with a meal, or as directed by a physician.

Extract Powder: As a dietary supplement, take 500 mg daily, or as directed by a physician.

Those with liver or pancreas disorders, or who are pregnant/nursing should not take this. Do not take this product two weeks before or following a scheduled surgery. Talk to your doctor before taking this product if you take blood thinning medications or medications used to treat prostate disorders. Stop use and seek medical attention immediately if you experience prolonged dizziness, headaches, nausea, vomiting or constipation after taking this product.

Saw palmetto is generally very safe. No serious side effects have been reported (x).

People have to deal with some annoying health conditions. Take prostate enlargement, for example. The inconvenient symptoms of an enlarged prostate can affect a person’s quality of life. Unfortunately, it appears as though most men experience it at some point in their lives. The good news is that there is a natural, safe and effective herb that can help. Research generally supports the use of saw palmetto for prostate and urinary health in men. The studies that don’t reveal any advantage at least show that there are no major side effects. Other benefits include management of hair loss in men and women, as well as an overall anti-inflammatory effect. Research has yet to determine if saw palmetto has any efficacy on hormonal issues effecting women. However, it may be possible. With its long history of use and good safety record, it might be worth putting on your radar.