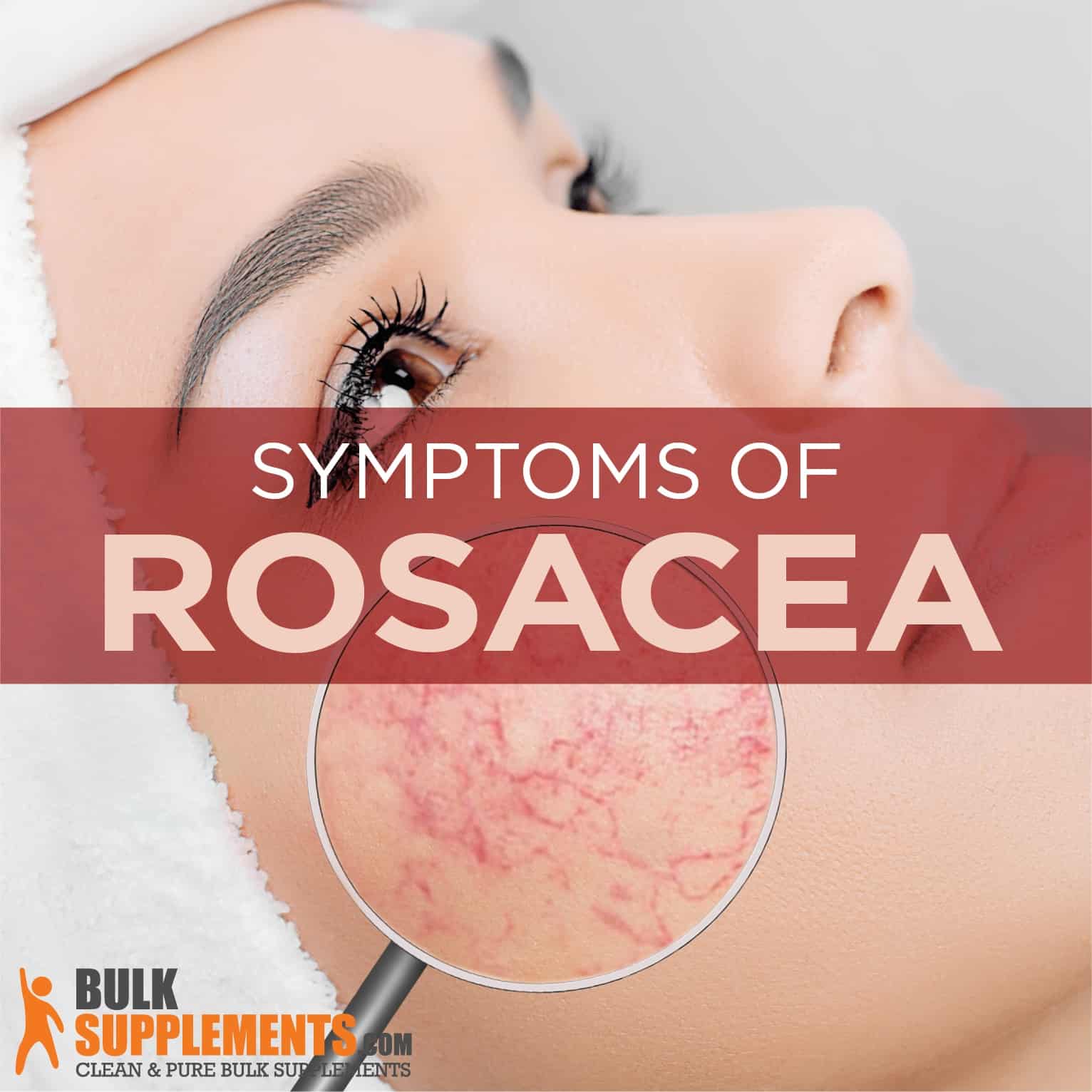 Rosacea is a highly common skin disorder. It is a condition affecting some 14 million people (x, x) and is characterized by redness of the face, similar to a flushed or blushing appearance. Unfortunately, rosacea often spreads to the cheeks, ears, forehead and chin. It may even spread to the back and chest. Rosacea is associated with skin plaque and can develop into four subtypes.

Individuals with erythematotelangiectatic rosacea may experience redness, flushing and visible blood vessels. Another common type is papulopustular rosacea, which is associated with redness, swelling and acne-like breakouts. With phymatous rosacea, the skin thickens and has a bumpy texture. Lastly, with ocular rosacea, the eyes are red and irritated. The eyelids can be swollen and might look like sties.

If you are impacted by rosacea, you are not alone. Princess Diana, Bill Clinton and many other famous public figures have had rosacea.

Redness in Central Part of Face

First and foremost, rosacea is characterized by redness in the central part of the face. Redness in the face occurs with each type of the condition, followed by other characteristics such as papilla or skin thickening. This is also when small blood vessels on the nose and cheeks swell and become visible. The redness is not merely a color, however. Redness in the face is usually accompanied by uncomfortable sensations such as stinging or burning (x).

Red bumps often follow the redness of the face with rosacea. These bumps typically swell and resemble pimples. They can also contain pus and make the skin feel hot and tender. The red bumps are often referred to as acne and can make the skin very oily. Papules and thickening skin are similar features.

When rosacea affects the eyes, it classifies as ocular rosacea. This affects approximately half of those with rosacea. Eye dryness, itching, redness and other eye problems may occur. The eyelids may be swollen, reddened and irritated. In cases of ocular rosacea, the eyes may appear watery and bloodshot. The eyes may burn, sting or feel as though there is sand in them, and they can be sensitive to light (x).

An enlarged nose is perhaps one of the most unique symptoms of rosacea. This is typically due to skin thickening, thus causing the nose to appear large and bulbous. This symptom is more common in men than women. Skin thickening of the nose is known as Rhinophyma. In some cases, skin may also thicken on the cheeks, forehead, chin and ears. Besides skin thickening, enlarged pores and a ‘bumpy’ looking textures also appear. Although these symptoms may seem topical only, they can have effects on one’s self-esteem (x).

There are many symptoms of rosacea such as broken or visible blood vessels, papules or pustules, blushing easily, dry or scaling skin, acne-like breakouts and skin sensitivity. Individuals affected by this condition report feelings of frustration and embarrassment, worry, low self-esteem, anxiety and depression. If you know a person with rosacea, be mindful and courteous of the condition.

Unless you are affected by rosacea, few people know about this highly common condition. Many people often categorize it simply as acne alone, but this is not the case. It is a lasting condition with several risk factors, but there is no known cause. While scientists are still trying to determine its cause, there are a few myths and facts to keep in mind:

Aloe vera may treat a variety of skin conditions. This plant is emollient and moisturizing, which makes it a great topical agent for rosacea. Aloe vera has cooling, anti-inflammatory, redness reducing qualities. You can purchase aloe vera gels at most drug stores and even harvest the plant yourself. It is possible to have an aloe vera allergy, so use with some caution.

Chamomile is also highly moisturizing and useful as a topical, herbal treatment. It may also be present as an ingredient in certain products, so look for chamomile when treating your rosacea. You can also use chamomile essential oil, diluted; apply cooled chamomile tea as a skin wash or compress.

Coconut oil has moisturizing, antioxidant and anti-inflammatory effects. Studies on coconut oil are heralded that this natural oil has a lot to offer, and can be used as a carrier oil with other essential oil treatments. In case of allergens, you should always consult your doctor even before using a natural supplement.

Clean Up Your Diet

Diet plays a large role in the severity of rosacea. Poor diet may cause increased flare ups. Some things to avoid include hot foods and drinks, as well as alcohol. In addition, spicy foods, caffeine and dairy products may be problematic. If you have rosacea, it is better to avoid these foods as much as possible (x).

On some occasions, makeup is necessary. Makeup can be harsh on already sensitive skin and clog pores. Individuals with rosacea should avoid makeup during flare ups and stick to a natural skin care routine. Learn which products work the best on sensitive skin and avoid harsh chemicals/ products. This approach includes protecting the skin with sunscreen.

Natural remedies are ideal, but sometimes the right prescription is necessary. Your doctor may prescribe topical medications, oral antibiotics, Isotretinoin, Blephamide or Tetracyclines, all specific to rosacea. Laser treatment is also an option, in which an intense pulse light can shrink the appearance of blood vessels. Plastic surgery is also an option for individuals with thickened skin.

Rosacea affects approximately 14 million people. The condition is much more than just skin deep, too. It affects an individual’s everyday life by making it difficult to interact with others due to embarrassment, and anxiety. As of today, science has not revealed one main cause, only risk factors such as skin color and family descent.