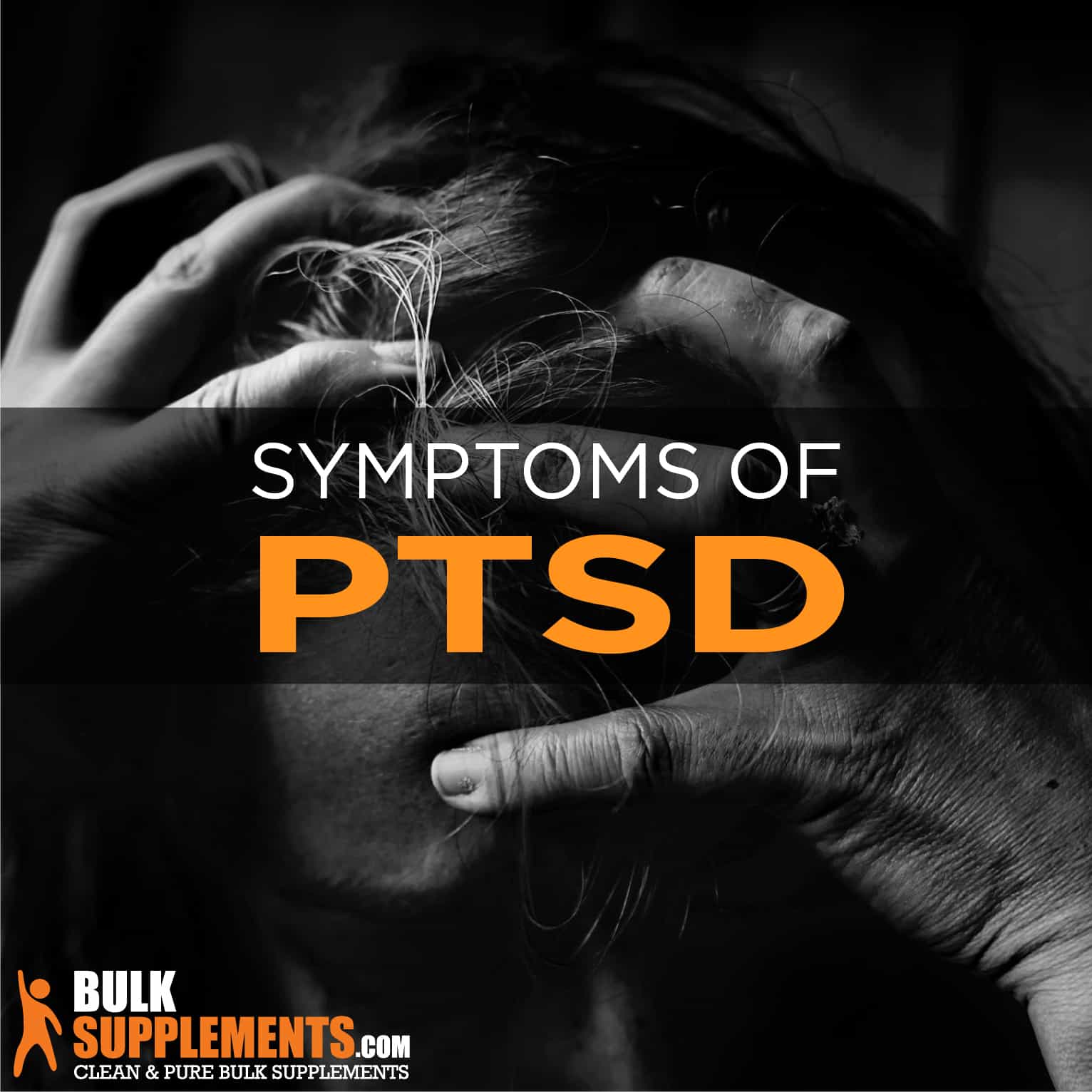 Post-traumatic stress disorder (PTSD) is a form of anxiety, classified as a psychiatric disorder. It develops when someone experiences or witnesses extreme life-altering events — natural disasters, violent assault, tragic death or terrorist attacks.

The disorder became more prevalent after WWI. It was commonly called “shell shock” after the first world war and “combat fatigue” after the second. But PTSD can affect anyone, not just soldiers. It actually manifests in women in higher concentrations than men, affecting about 3.5 percent of the U.S. population in total (x, x, x, x).

Symptoms affect day to day activities significantly. Most symptoms of post traumatic stress disorder will emerge within the first 30 days following the trauma. In some cases, such as with complex PTSD or child PTSD, the onset may be delayed for months or even years (x).

While it’s typical to experience fear or anger during a traumatic event, most people are able to mentally recover from the trauma naturally. But those PTSD patients essentially become stuck in a state of flux, unable to move past the event.

PTSD manifests in a variety of symptoms including (x, x, x, x):

However, many people who experience trauma don’t develop post traumatic stress disorder and people who do may not all exhibit the same symptoms. Additionally, no one patient will display all of them at once. There are three types of PTSD symptoms — hyperarousal, re-experiencing and avoidance — each with different manifestations (x).

Hyperarousal stimulates the patient’s physiology, heightening anxiety. They may find it hard to relax and startle easily (x, x, x). Hyperarousal symptoms include:

PTSD can cause angry outbursts and irritability because the patient has difficulty expressing or coping with their trauma (x).

In a study, researchers performed physical shocks on rats, which resulted in learned hypervigilant behavior as a result of their trauma (x). Hypervigilance causes the patient to see even simple physical and psychological cues as precursors for danger. They also have an increased startle response to sensory input, such as loud noises or unexpected touches. The person may also constantly look for threats in their environment and have trouble trusting people or situations or reacting aggressively to everyday situations (x).

The most typical symptom of PTSD is re-experiencing the event. The patient is forced to involuntarily relive the event in vivid detail. This can occur in physical sensations such as (x):

In some cases, the person will repeat negative thoughts about themselves in their heads that stop them from mentally accepting the trauma. Self-doubt, shame and guilt are common (x).

Though they are reported less often, PTSD symptoms may also manifest as chronic pain, stomach aches, dizziness, headaches and chest pain. The U.S. Department of Veterans Affairs has reported that as many as 35 percent of people who suffer from chronic pain also suffer from PTSD (x).

PTSD patients learn to avoid speaking about, visiting locations and even seeing people who remind them of their trauma. They repress their emotions and thoughts to outrun the fear associated with the situation (x, x).

Many patients suffer from dis-associative symptoms as a more acute form of avoidance (x). Feelings of alienation, detachment, depersonalization and emptiness are common. The brain is a powerful tool that will do its best to protect itself. In this case, the brain builds a wall around its emotional receptors (x).

This is not solely related to PTSD, but those who suffer from it are prone to depression. PTSD causes shame, guilt, anger and hopelessness, which can lead to depression over time (x).

Many people suffering from PTSD have heightened emotions or a total lack of emotion. Mood swings are also common and often unexplained. In studies, researchers have recorded a significant association between PTSD and difficulties with emotional regulation (x, x).

This form affects people that have experienced trauma over a long period of time, such as domestic violence, long term child neglect and sexual abuse or imprisonment (x, x). It can cause additional symptoms that affect the way patients adapt to stress and how they view themselves and people around them.

PTSD patients may have difficulties regulating their emotions, resulting in persistent sadness or suicidal thoughts. They may experience issues with consciousness, in which they relive or even forget traumatic events or experience disassociation. PTSD affects its patients’ self-perception, creating feelings of helplessness, shame, guilt and stigma. The patient may also develop a preoccupation with the person who caused the trauma, becoming obsessed with their relationship to them or with getting revenge. They may isolate themselves, have difficulties trusting other people or lose faith and meaning in existing systems.

Whereas adults must actually experience death, abuse or violence, children can suffer from PTSD if they are even threatened by it. After trauma, children may experience distressing memories of the event — either cued or spontaneous — or lose the ability to express emotion and become socially withdrawn. Some symptoms of child PTSD are similar to that of adults, but it also has some of its own unique symptoms (x, x):

A PTSD trigger is an action, sound, smell or touch that causes the traumatic memories to resurface. They can be innocuous things that occur over the normal course of a day. A trigger can generate physical sensations, extreme mental duress or hallucinations.

Triggers can be internal or external. Internal triggers can include anger, fear, sadness, anxiety, frustration, loneliness, vulnerability or pain. External triggers include arguments; seeing or hearing about a similar event; sights, smells, sounds and tactile experiences; anniversaries; physical places; changes in relationships or seeing someone else who was involved in the trauma (x).

Post-traumatic stress disorder is caused by experiencing or witnessing a terrifying event. In most cases, these events are life-threatening and include (x, x):

Only about 33 percent of people who experience trauma will actually develop PTSD. Researchers don’t completely understand why some people experience the symptoms and others don’t. But genetic and mental traits may play a role, such as past depression or anxiety, family history of PTSD or naturally high adrenaline levels. Research also suggests that PTSD may result as a survival mechanism to prepare people for trauma in the future (x, x, x).

Most cases of post-traumatic stress disorder are due to direct experience. But it is possible to develop it from secondary trauma, which occurs when someone close to you suffers trauma. Those exposed to repeated trauma in their profession — like those in the police force, the medical field, psychologists and emergency workers — are at risk for secondary traumatic stress (x, x).

Treatment aims to help patients take back control of their life. The first line of treatment involves psychotherapy. But in some cases, a physician may prescribe medication. There are three widely used psychotherapy treatments:

Exposure therapy helps the patients face their fears regarding the traumatic event in a safe and controlled environment. This treatment is most effective in reducing nightmares and flashbacks (x, x).

Often used in tandem with exposure therapy, CBT helps identify the cognitive patterns keeping the patients locked in a state of fear. It is an effective way to banish a lot of the negative beliefs that PTSD victims experience (x).

EMDR is paired with exposure therapy in an attempt to help the person change the way they react to traumatic memories. The patient focuses on a repetitive sound or on moving their eyes from side to side while they think about the trauma at the same time (x, x).

Sometimes therapy alone is not effective. In many cases, patients need pharmaceutical intervention to help restore normalcy in their lives. The most common prescription medications to treat PTSD are antidepressants. Researchers have concluded that paroxetine and sertraline are successful in PTSD treatment (x, x, x).

Pharmaceuticals are not the only way to manage PTSD symptoms. There is a range of helpful alternative therapies and natural supplements as well. They can help reduce and eliminate many of the distressing symptoms that people with PTSD experience.

For thousands of years, St. John’s Wort has been an effective natural remedy for mental health conditions. It behaves in the brain the same way as most MAOI medications. Although it is unclear how exactly it treats mental health ailments, it improves mood by preventing key neurotransmitters from breaking down. The recommended dosage is 600 mg up to two times per day (x).

The FDA approved ketamine infusions for anesthetic use, but they are also an effective treatment for mental health conditions. In fact, PTSD is its most prevalent use. The medication is administered intravenously in minute doses. A 40-minute treatment has demonstrated an immediate and radical reduction in PTSD symptoms (x).

Vitamins — vitamin B12 in particular — are essential to brain chemical and hormone management. Those who suffer from PTSD have elevated stress and depression levels. The side effect is often a lack of proper nutrition, which can lead to B12 deficiency. Supplementing with B12 helps saturate the body with vital micronutrients that will increase serotonin levels in the brain. The recommended dosage is a single 100 or 200 mg once a day. It is vitally important to accurately measure the exact dose on a scale (x).

Yoga and meditation may offer a comprehensive range of healing benefits for mental health disorders. It is an effective way to manage stress, reduce anxiety and balance the mind and body. Specifically, trauma-sensitive yoga is beneficial for PTSD. It has fewer hands-on adjustments than regular yoga and moves at a slower pace with gentle movements (x).

Turmeric has a diverse range of health benefits for the whole body. Curcumin, its main compound, impairs fear and memories following trauma. It also helps reduce the effects of chronic stress, which can relieve PTSD symptoms. The recommended dosage is 1,000 mg once daily with food and water (x).

In China, acupuncture has been used to alleviate various ailments for centuries by inserting long, thin needles into pressure points all over the body. By targeting specific areas, acupuncture can relieve stress, anxiety and fear. It is a safe and cost-effective way to treat the disorder without the risks of side effects (x).

Magnesium is an effective way to reduce fear and combat depression. It is found in more than 300 biochemical reactions in the body and plays a vital role in hormonal, enzyme and neurotransmitter activity. Supplementing with magnesium helps the brain fight fearful responses to traumatic memories. The recommended dosage is 2,600 mg once or twice daily (x).

Post-traumatic stress disorder follows a traumatic event. A person may experience or witness these events firsthand or see them happen to someone else. As a result, the brain suffers neurochemical changes.

PTSD causes side effects that limit a person’s ability to lead a normal life. It causes the person to relive the event in their mind, while their body produces a physical response. Not all symptoms occur instantaneously and some people suffer more severe reactions than others.

Though many doctors may prescribe pharmaceuticals, there are natural options available. Yoga, immersion treatment and vitamin supplements have demonstrated verifiable progress in the fight against PTSD. Always remember you are not alone and never hesitate to reach out to those around you for help.

If you have suffered a traumatic event and have exhibited signs of PTSD, it is critical to seek a medical diagnosis to receive proper treatment. There are several physiological therapies that manage the symptoms.