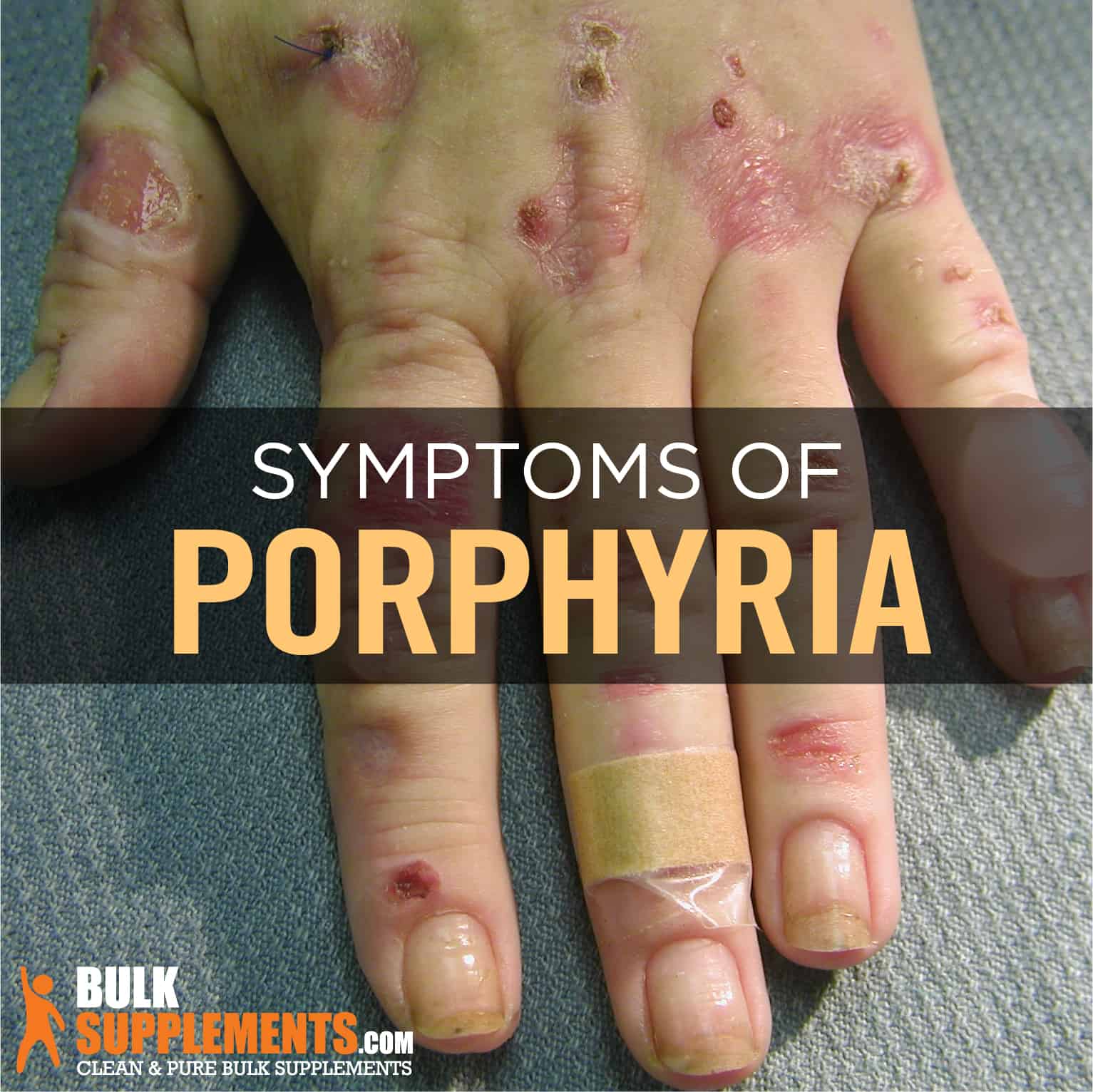 Porphyria is the general name given to a group of disorders that arise when there’s a problem with the body’s ability to produce a chemical called heme. Heme is a major part of hemoglobin, the molecule found in red blood cells that carries oxygen to tissues in the body (x). The body makes heme in an eight-step process and each step relies on the action of a different enzyme. If one enzyme isn’t available, the process stops. This, in turn, causes a buildup of substances called porphyrins (x).

High levels of porphyrins can be toxic, leading to porphyria. The type of porphyria a person has depends on which enzyme is on short demand and therefore which type of porphyrin builds up (x). Some people never have symptoms while others have life-threatening episodes.

Most often, porphyria affects either the skin or the nervous system. Some types are more common among certain populations due to genetics. However, one form tends to occur as a result of lifestyle factors (x). There’s currently no cure for this rare group of conditions, but some treatments and therapies can help manage it.

Types of Porphyria and Symptoms

Researchers identified at least eight different types of porphyria. Some are more common than others, though all are considered rare. What makes this condition seem even less common is the fact that many people who have it never actually show symptoms.

Porphyria is classified as either acute or cutaneous. Acute types impact nerve function while cutaneous types cause the skin to become sensitive to light. Generally, women are more likely to experience severe attacks of acute types thanks to the role that estrogen plays in triggering symptoms (x).

Additionally, since heme production occurs in either the liver or bone marrow, another classification is made. When heme synthesis goes awry in the liver, the form of porphyria is “hepatic”. When the problem occurs in the bone marrow it’s considered “erythropoietic” (x).

Hepatic types can lead to impaired functioning of the liver as well as liver cancer. Erythropoietic forms can cause anemia and an enlarged spleen (x). Below describes four of the more common porphyrias and their cutaneous and/or neurological symptoms:

PTC represents the most common type of porphyria. It’s a hepatic, cutaneous type that causes extreme skin sensitivity to light along with chronic blistering. The prevalence is estimated to be as high 1 in 10,000 in some places such as the United Kingdom. People tend to show signs later in life, between ages 40 and 60 (x).

While rare overall, the most common acute form (meaning it effects the nervous system) is AIP. Also called Swedish porphyria, people tend to first experience the symptoms in their 20s or 30s. AIP attacks can be life-threatening. Signs include bouts of severe abdominal pain, nausea, vomiting, racing heart, high blood pressure, anxiety and dark urine. Eventually, a person can begin to hallucinate or have seizures. However, most people who have AIP never actually have symptoms (x).

VP can be both acute and cutaneous and results from the buildup of porphyrins in the liver and usually only occurs in adults. People can experience blisters on skin that’s exposed to the sun. And, like AIP, neurological symptoms can manifest such as abdominal pain, nausea, vomiting and racing heart (x). The prevalence varies depending on the area. In South Africa, for example, as many as 1 in 300 people suffer from this condition, while Finland reports 1 in 75,000 people (x).

EPP is a hepatic, cutaneous variety of porphyria that usually begins in early childhood. In fact, it’s the most common form among children of all ethnicities. Unfortunately, it can also be very painful and impact a person’s quality of life. With EPP, exposure to sun causes skin to itch, burn and become inflamed. The skin generally doesn’t blister or scar but can become thick over time. If left untreated, EPP can cause liver damage (x).

Most porphyrias result from a mutation in any one of the eight genes involved in making the enzymes needed to produce heme. People inherit these mutated genes from one or both of their parents (x).

Having a gene mutation doesn’t necessarily mean a person will ever show signs of the condition. Furthermore, sometimes symptoms only arise in response to factors like hormonal changes, fasting or dieting, during times of physical or emotional stress or during the use of certain medications (x).

PCT, however, is more commonly acquired than inherited. This means that something happened in order to trigger the enzyme deficiency. In fact, 80 percent of PCT cases arise as a result of non-genetic factors such as alcohol use, smoking, use of estrogen-containing medication, exposure to Agent Orange (a pesticide used during the Vietnam War) or having hepatitis C or HIV. Unlike the other forms of porphyrias, people with symptomatic PCT usually have too much iron in their bodies rather than an iron deficiency (x, x).

There is no cure for porphyria, but there are often ways to manage it through diet, lifestyle and medication. Methods used to manage it depends on the type of porphyria. While diagnosis and prognosis of this condition is improving, even doctors still have a hard time properly identifying and managing it (x). As a result, few at-home proven remedies exist at this time.

Intravenous administration of the medication Panhematin (called heme arginate outside of the U.S.) can replenish heme in the liver. It also reduces levels of harmful porphyrins following an attack of an acute form of porphyria (x).

In addition, since attacks of acute porphyrias often follow periods of fasting, dieting or weight loss, ensuring a steady flow of carbohydrates is recommended (x).

Symptoms of cutaneous forms of porphyrias can be avoided by staying out of the sun (x). Unfortunately, this requires lifestyle restrictions that may be difficult for many people.

Medical professionals can use therapeutic doses of beta-carotene to help manage one type of porphyria, EPP, because it helps improve tolerance to sunlight (x).

Affects of PCT can be reduced by regular venesections (blood removal) to reduce iron stores. In addition, the medication chloroquine helps flush excess porphyrins out of the body through urine (x). And, since smoking, excessive use of alcohol, and some medications can trigger PCT, avoiding these will help prevent complications.

Porphyria isn’t just one disorder. It’s a word that describes at least 8 different conditions, mostly genetic, involving the accumulation of toxic porphyrins in the body. Porphyria can go unnoticed throughout a person’s lifetime or can suddenly a trigger severe, life-threatening situation. Researchers are working to understand how to better identify and treat porphyria. Some medications and therapies can help manage it, as can avoiding triggers that bring on an attack like sunlight, certain medications, and fasting.