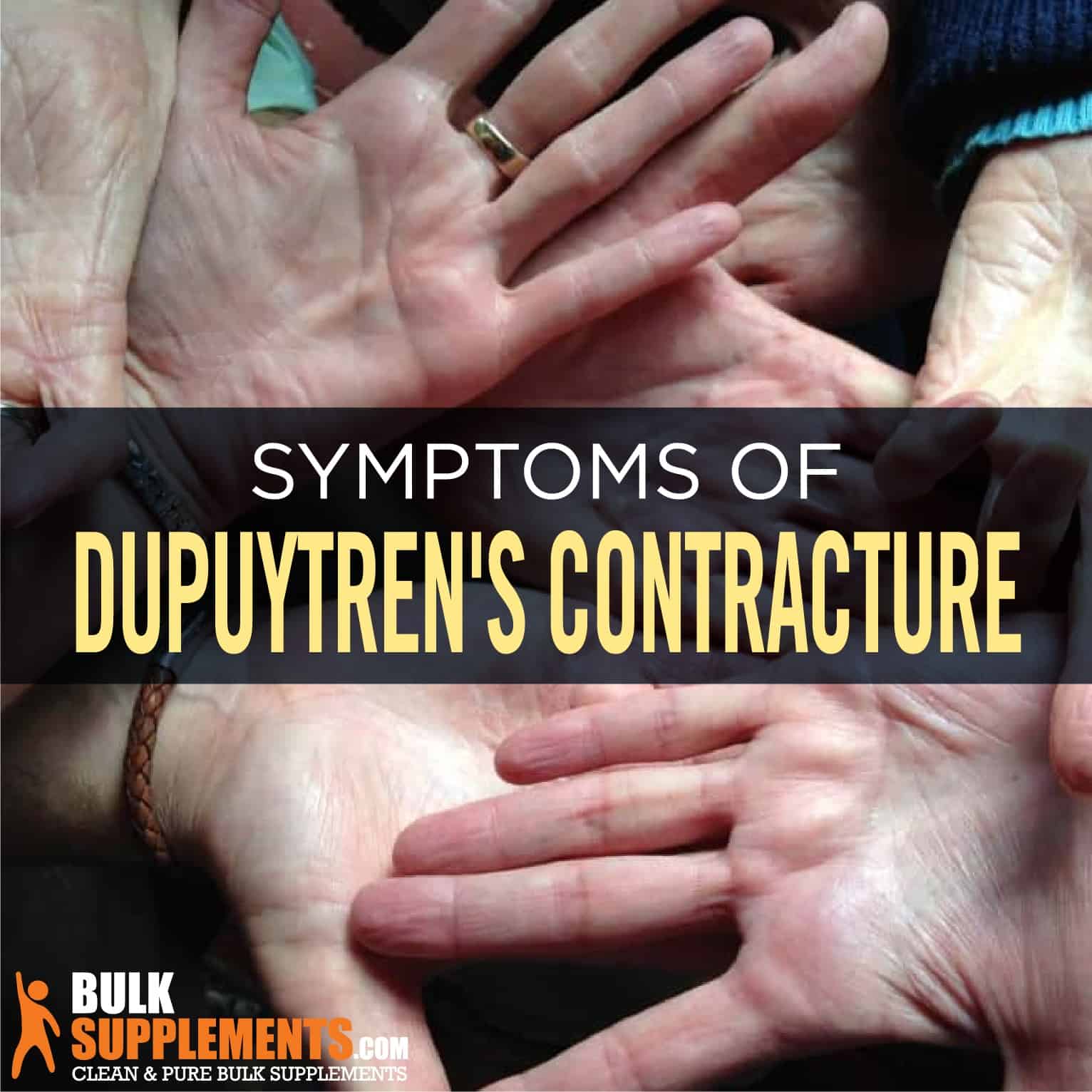 What is Dupuytren’s Contracture?

Dupuytren’s contracture is when changes in your muscles or tendons under the skin pull limbs inward, causing a deformity. Dupuytren’s contracture explicitly causes gradual deformation in your hand. Fibrous tissue that grows within the hand attaches to the tendon sheaths and pulls the fingers towards the middle of the hand.

How Does Dupuytren’s Contracture Deform Your Hand?

Just beneath the skin on your hand is a thin layer called the fascia — which cases your body parts and holds them together. (x) With Dupuytren’s contracture, over time, the fascia tightens, thickens and becomes permanently fixed in its new position.

Typically, the fourth and fifth fingers become affected and bend inwards, but any fingers of the hand may experience the bend inwards. The effects of Dupuytren’s contracture occur gradually and often take several years to reach a debilitative level. The condition is not usually painful but affects the range of motion in one or both of your hands. (x)

Some famous public figures who have had Dupuytren’s contracture include Ronald Reagan and pianist Misha Dichter. (x)

The history of this disease starts as a bit of folklore from the Viking and Scottish 16th century, as a curse that sometimes tells of a miraculous cure by crushing the hand open or “just went away.”

In 1614, the health concern first appeared in medical records by Dr. Felix Platter in Basel, Switzerland. He examined a stonemason’s hand whose left little finger and ring finger pulled into his palm. According to Platter’s description, he dissected the hand after the stonemason’s death, describing “tendon-like crispness.”

In 1777, the actual cause became known as the fascia rather than the tendons by British doctor Mr. Henry Cline, Sr. Further studies continued in 1822 with one of Cline’s students who wrote about the dislocations and fractures of the joints caused by the contraction of the fascia in the person’s hand. A treatment ensued similar to today’s fasciotomy, where the doctor creates a tiny wound in the fascia. Thus, the finger extends with a split applied to hold its position to heal.

In 1831, Frenchman and surgeon Baron Guillaume Dupuytren diagnosed fascia as the cause and performed several lectures. During the talks, he showed fasciotomy. He cut through the skin and fascia, cured the patient of contracting fingers. With his lectures and demonstrations of treating the condition successfully with surgery, he claimed he was the first to recognize the cause of the health concern.

Through the centuries, other health concerns related to Dupuytren’s contracture, such as Peyronie’s (upward penis curvature), Garrod’s Pads (knuckle pads), Ledderhose disease, the plantar fascia in the foot, Frozen Shoulder, lining surrounding the shoulder joint develops inflammation and stiffens up.

In 1902, all these conditions related to fibromatous masses in the areas of contraction. Today, treatment for these health concerns relates to abnormal tissue development in the fascia called fibroplasia. (x)

Understanding the symptoms of the disease will help you identify and treat the condition with the help of your healthcare provider. Some known symptoms:

A bump or nodule in the palm is a confirmed symptom of Dupuytren’s contracture. The lump is not usually painful but can be slightly sensitive. In some cases, there may be 1-2 nodules.

Although Dupuytren’s contracture is still rare and only affects approximately 200,000 people per year, the last 50 years have provided profound enlightenment on the course of the condition. For example, early detection of the bump/module may play a significant role in early diagnosis and treatment. Treatment described deals with minimizing the fibroplasia with injection of an anti-inflammatory. (x)

Another common symptom is loss of motion in the fingers because of stiffness. This loss of range of motion is a primary symptom of Dupuytren’s contracture. But keep in mind that finger stiffness and limited mobility are common in several hand conditions and diseases. This symptom is typically the most difficult for doctors and surgeons to address, leaving the limited range of motion permanent because of tissue fibrosis. (x)

“Puckering” or dimples of the skin occur when the skin grows and tightens over the lumps as described above. In addition to tough bands that may form, this change in the skin can make it difficult or impossible to move or stretch your hand. (x)

The signs and symptoms of Dupuytren’s contracture usually progress slowly and will almost always occur in a particular order — bump/nodule in the palm of your hand, loss of motion in the finger and finally “puckering” of skin over tendons, or tight bands that form. Eventually, your hand(s) may appear clenched. If you have Dupuytren’s, you may have difficulty completing everyday tasks such as picking up large objects, removing a card from their wallet, wearing gloves, shaking hands, or laying their hands flat on a table. (x)

Though the medical industry has no actual cause of this disease sighted, there are factors that people have that seem to cause them to get Dupuytren’s contracture more than others. Such as:

Multiple studies show a significant positive correlation between Dupuytren’s contracture and heavy smoking. Using even moderate amounts of alcohol is also a risk factor. Tobacco products and alcohol promote the formation of certain toxins that affect the biochemical elements of your palm’s connective tissue. (x)

Dupuytren’s contracture is a hereditary health concern. That means if members of your family have the condition, you are more likely to have it as well. Ethnicity also plays a role. People who are of Northern European (English, Irish, Scottish, French, Dutch) or Scandinavian (Swedish, Norwegian, Finnish) descent have a higher risk of having Dupuytren’s contracture. Some also say populations around the northern latitudes, such as Japanese and the Vikings. The disease is rare in African and Indian populations. (x)

Debate still exists around the role of injury and occupational factors in the onset of Dupuytren’s contracture. (x)

Currently, Dupuytren’s contracture has no cure. As mentioned before, early treatment helps keep the disease from progressively getting worse. So timely diagnosis is imperative. Some treatments to consider:

While the condition may take several years to develop, you have it forever once you have it fully. The goal of treatment is to make living with Dupuytren’s contracture more manageable. For example, stretching can significantly increase the range of motion of your hands and fingers. It does not prevent Dupuytren’s but improves overall hand function. Helpful stretches include:

The growth of tough collagen fibers contributes to the development of Dupuytren’s contracture. Collagenase, a compound that breaks down connective tissue, injected into your palm may help loosen up the tissue. The injection is a common alternative to surgery. These injections can improve hand flexibility by at least 5 degrees, allowing a greater range of motion and more hand function. These injections typically occur in phases over a period of time. (x)

Fasciectomy is the name of the surgery since the fascia is the part of the skin affected by Dupuytren’s contracture. This surgery removes the layer of the skin known as the fascia, which allows the fingers to relax a bit more. A needle aponeurotomy is another surgical procedure that is less invasive and has a faster recovery than open surgery. Regardless of the type of surgery, the goal is to increase the mobility of your hand. (x)

Supplementing your body may help ease the discomfort and immobility of your hand(s). When considering a new supplement, you should talk with your physician first. Some nutritional suggestions include:

Magnesium has many roles in hundreds of biochemical pathways in your body. While many foods contain magnesium, the body’s demand can easily exceed intake. It is especially true if you have diabetes, use cigarettes or alcohol or experience physical or mental stress. No known scientific studies involving magnesium exist, but anecdotal accounts of magnesium oil suggest that it may improve the condition of some people. (x) At the very least, avoiding a magnesium deficiency through supplementation can help promote overall health. (x)

Research shows that certain free radicals may impact the onset and severity of Dupuytren’s. (x) Free radicals are compounds that damage cells, which neutralize other compounds called antioxidants. Like magnesium, no studies have examined the role that antioxidants might have in reducing the symptoms of Dupuytren’s. However, one case suggests that the prolonged intake of the antioxidant Coenzyme Q10 (CoQ10) resulted in significant improvement in the condition — almost normal. (x)

Where to Buy Supplements for Dupuytren’s Contracture?

You can purchase these supplements for Dupuytren’s contracture at BulkSupplements.com. The company is an industry-leading manufacturer and distributor of pure dietary supplements.

Are you interested in trying any of these supplements mentioned in this article as a possible solution to helping you with your Dupuytren’s contracture? Contact BulkSupplements.com to place an order today.

Avoiding any factors that can lead to the development of diabetes and refraining from smoking are two steps you can take to prevent Dupuytren’s or slow its progression.

Treatment options including injections, surgery, and possibly even some natural remedies can help slow the effects of Dupuytren’s. CoQ10 seems to be an effective supplement when taken orally and magnesium oil as a topical remedy.