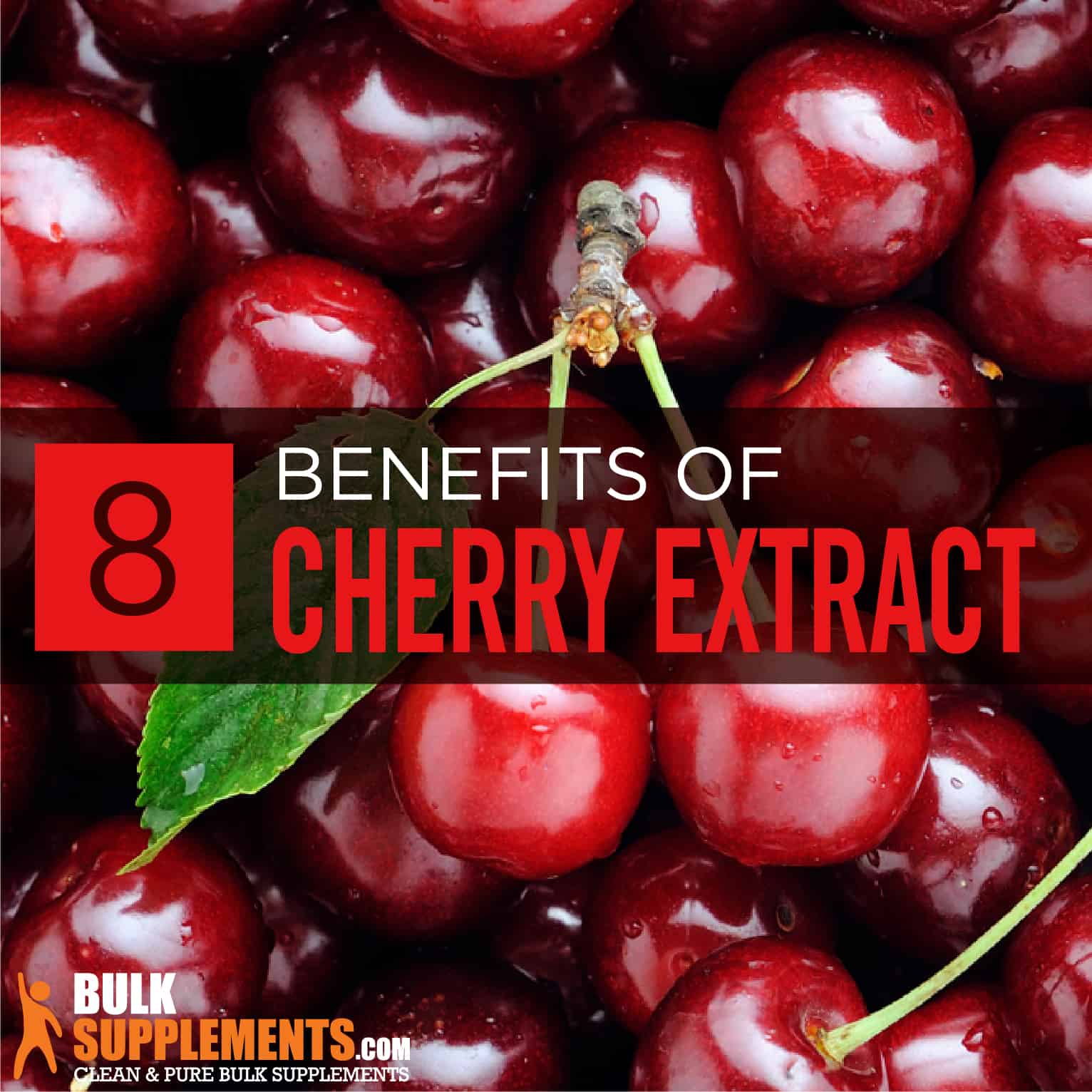 What is Cherry Extract?

As it turns out, the tart Montmorency cherry, or sour cherry, has a ton of health benefits to the human body. Although there are about 270 different types of cherries, the sour Montmorency is the most popular in many regions, including the United States.

The tart cherry is scientifically known as the Prunus cerasus and could easily pass for its sweeter counterpart, the sweet cherry, were it not for its distinctively acidic taste. Of course, there are other noticeable differences between the two varieties. One of the most apparent being that the sour cherry plant is shorter than the former. While the sweet cherry is mostly consumed wholly, the tart cherry is taken in dried or frozen form or as extracts. This includes juice, powder or even pill form.

The fruit was discovered in ancient civilization. Owing to the numerous health benefits associated with it, the cherry quickly spread to the rest of the world. It is thought to be native of Southwest Asia, where it quickly gained popularity and spread to Greece before being introduced to the rest of Europe. As technology advanced and the field of modern-day medicine widened, the fruit was studied and sold as an extract. It soon became a popular supplement to the more health-conscious part of the population.

These health benefits have made it a popular supplement throughout the world. They include relief from osteoarthritis and muscle-related pains, curing insomnia and improving digestion.

This is perhaps the most popular benefit of sour cherries; they are packed with many nutrients. Some of them include:

While they may not taste as sweet as the sweet cherries, the vitamins in sour cherries are far greater than the former. They are also better antioxidants (x).

Tart cherry extract (especially as a juice) contains high levels of anthocyanins, which are otherwise generally seen as antioxidants. They help to slow down any damage to the body cells or stop it altogether. This means that taking cherry extract could significantly help reduce inflammation and pain, especially in individuals suffering from osteoarthritis.

This was confirmed in a study that recorded results amongst 21 osteoarthritis patients. At the end of the experiment, it was noted that there was a significant reduction of pain levels experienced by the individuals over time. Their blood tests also showed that their inflammation levels had reduced (x).

Studies have shown that taking cherry extract may help to reduce blood pressure significantly (x). This allows for a regulated heartbeat and lower risk of overworking the heart, which may lead to heart attacks.

The extract also contains high amounts of anthocyanins, which are antioxidants and anti-inflammatory agents. Research shows that this helps to promote cardiovascular functioning. They also have vasodilatory properties (x). More research, however, is necessary to establish an effective dosage.

The extract also contains phenolic acids that are associated with numerous cardiovascular benefits. These include the healthy functioning of the blood vessel linings (x).

Arthritis is a condition whereby the affected individual experiences pain and stiffness in their joints due to inflammation (x). While there are different types of arthritis, most of them come down to inflammation of a joint or muscle that causes the patient to experience pain and soreness in varying levels of severity (x).

Gout is a variation of arthritis that often occurs in people with high levels of uric acid. The acid deposits and crystallizes in the joints to form needle-like projections. These, in turn, cause severe inflammation, which leads to pain, swelling and redness (x). The patients are administered anti-inflammatory drugs to relieve the pain and shorten the duration of attacks.

A six-week experiment was conducted amongst arthritis patients to check the effects of tart cherry juice on their symptoms. They took 16 ounces of juice daily for six weeks. At the end of the study, they recorded reduced pain and stiffness (x).

Other studies show that tart cherry juice reduces levels of uric acid in the blood (x) and will also reduce gout attacks by up to 50 percent (x). It would be safe, therefore, to say that cherry extract for gout is an effective remedy.

Treatment of Insomnia and Improving Sleep

Melatonin is an important hormone that helps to regulate the sleep-wake cycle. It does not necessarily put you to sleep, but its levels increase towards the evening and put the mind in a quiet and less active state that leads you to sleep (x).

Tart cherries not only contain the hormone, but also have compounds tryptophan and anthocyanins. These help create more melatonin in the body. It means that the cherry extract could be an excellent remedy for insomnia and could also improve the quality of sleep in individuals.

Trials have been conducted to this effect, and the results show that tart cherries could help increase the duration of sleep, improve the quality and even treat insomnia (x). One study showed that participants who have insomnia increased their sleep time by up to 85 minutes when they took 16 ounces of the juice every day for two weeks (x).

Cherry juice for weight loss and regulation of cholesterol levels is becoming quite popular. While human trials are still underway, existing studies on mice show that the anthocyanins present in the tart cherries could help fight against obesity. They are also speculated to help the body adjust their metabolism and reduce belly fat. Seeing as these studies have been conducted on animals, however, trials on human subjects will be necessary to establish whether the extract has similar effects on them (x).

Several studies have proved that cherry extract could be a desirable supplement for physically active people, such as athletes.

A group of long-distance runners was administered with 24 ounces of tart cherry juice for seven days. Another group was put under placebo. After a race, the former group experienced three times less pain compared to those who were under placebo (x).

A similar study involving marathon runners showed that those who took the juice (16 ounces daily) not only recovered faster, but also experienced less fatigue, muscle soreness and inflammation (x). It proves the anti-oxidative and anti-inflammatory abilities of the extract.

The tart cherry powder has also been observed to promote muscle strength — a particularly valuable property to individuals involved in intense muscle and strength training.

In a study, a group of men in intense resistance training were administered with the cherry supplement. At the end of the experiment, the group lost up to 4 percent less muscle strength compared to those under placebo (x).

Further research is necessary, however, as some similar tests found little or no benefit of using the cherry extract for muscle strength and recovery.

The cherry extract contains significant amounts of antioxidants, which, as mentioned earlier, slow down or stop the breakdown and damage of body cells. These include brain cells.

Some brain disorders, such as Parkinson’s syndrome, are associated with oxidative stress in the brain cells. Oxidative stress can broadly be viewed as an imbalance between the free radicals and antioxidants in a system. Free radicals can be seen as the “bad guys” in this case, as they are basically the cause of cell damage and breakdown (x). Taking cherry extract should add the antioxidants to help maintain the balance between the two compounds (x).

Researchers put together a study involving several adult men and women who were experiencing mild-to-moderate dementia. They were divided into two groups; the first was administered with 6.5 ounces of cherry juice daily for 12 weeks, and the other was put in placebo.

At the end of the study, the researchers observed a significant improvement in both long- and short-term memory in the group put under the cherry juice study. They also recorded better verbal fluency. There was no obvious change in the group that was put in placebo (x).

Other possible benefits of the cherry extract include:

Side Effects of Cherry Extract

Generally, the tart cherry fruit extract has not been found to have any significant side effects on anyone consuming it either as a fruit, juice or a supplement. It is safe for adults and children, but be sure not to take it in excess.

Some of the other side effects you may experience include:

There is no sufficient research and information available to confirm whether sour cherry extracts from the stem are safe. The fruit and extracts from the tart cherry fruit are likely safe for pregnant and breastfeeding women if taken in safe amounts. It is still unclear on the safety when taken in medicinal amounts. People with allergies to cherries, including anaphylaxis, should avoid taking the extract.

Cherry extract is obtained from the tart Montmorency cherry and is popular for its numerous health benefits. Current and ongoing research suggests that the cherry extract is full of nutrients and properties that help promote health in the human body. Some of the possible benefits include treating insomnia, reducing inflammation and pain in people with arthritis and gout, improving strength training and reducing muscle soreness, healthy heart and brain functioning as well as aiding in weight loss. Most of these benefits are associated with the antioxidants in the fruit.

There are no significant side effects observed or reported by people taking the extract. However, there is a high chance of suffering gastrointestinal problems if taken in high amounts or by people suffering from conditions such as Crohn’s disease and IBS. Insufficient research is available on how safe it is for pregnant and breastfeeding mothers. It is advisable to avoid it or seek the opinion of a medical professional. There are still many other benefits and side effects of cherry extract that are still under research.