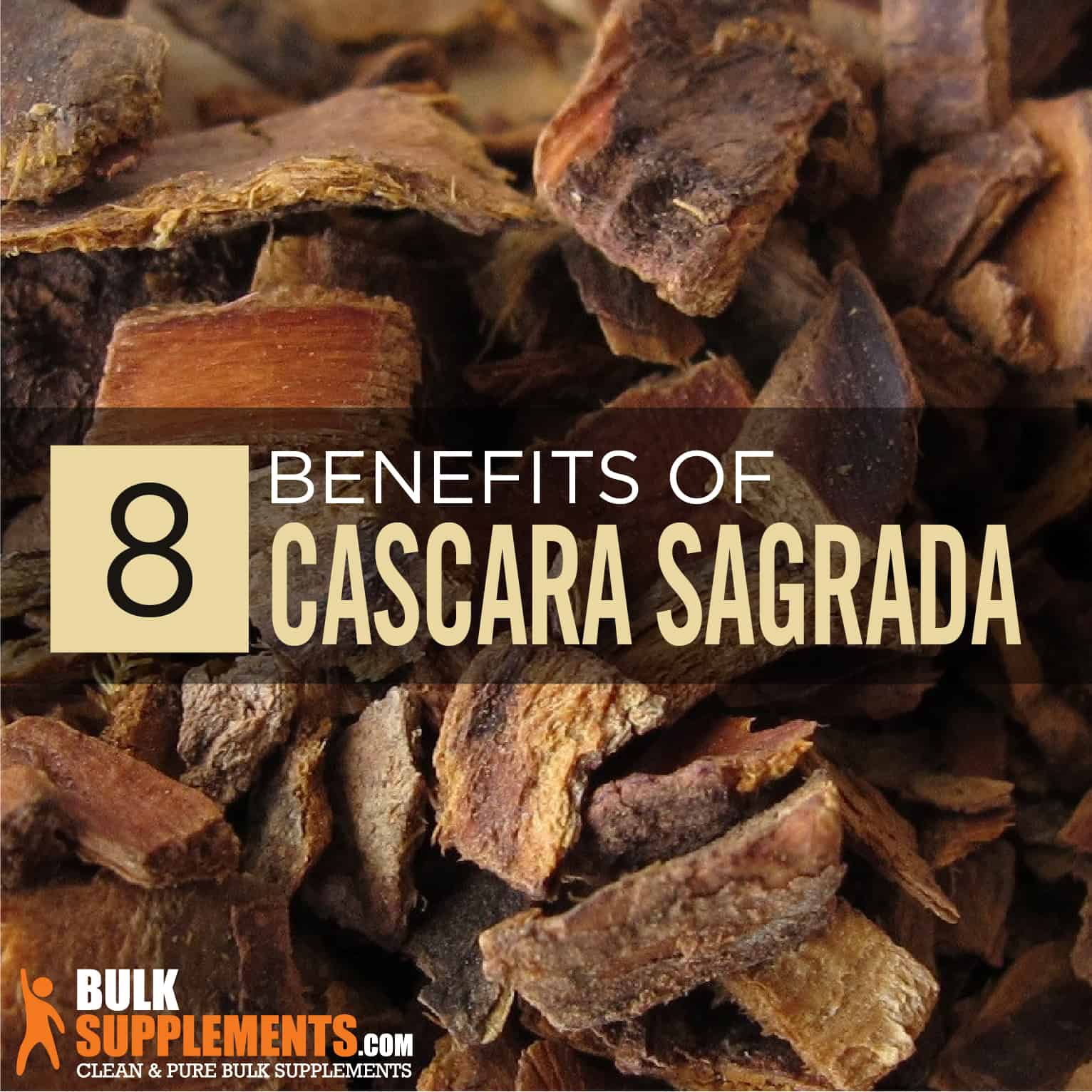 What is Cascara Sagrada Extract?

Cascara sagrada is Spanish for “sacred bark.” It describes the aged or dried bark of the Rhamnus purshiana plant that is native to the northwestern region of North America. Other regions are home to similar species of Rhamnus including R. frangula in Europe and R. davurica in Asia.

Growing more than 20 feet long, the cascara sagrada shrub has a reddish-brown bark and thin, serrated leaves. It flowers in the spring and produces toxic dark berries. The shrub’s bark must be dried and aged before use since fresh bark can make someone very sick.

Cascara sagrada is famous for its many therapeutic benefits. It’s most commonly used to relieve constipation and support colon and digestive health.

As a dietary supplement, cascara sagrada comes in powder, capsule or liquid form. It can also be taken as a very bitter tasting tonic or tea. This bitter taste actually has a practical use — it’s sometimes applied to the nails of little kids to stop their nail-biting habit.

The bark of cascara sagrada is also called chittem bark, sacred bark and California buckthorn. It’s been part of people’s medicine chest for centuries, but unfortunately there are few modern scientific studies on it. The benefits below are largely based on historical use or on research that focuses on isolated components of the extract.

The active compounds in cascara sagrada and its related species are a group of chemicals called anthraquinones. They cause muscular contractions (aka peristalsis) in the colon, which in turn stimulates a bowel movement. These compounds, including a notable one called emodin, are what give cascara sagrada its therapeutic properties (x). It also contains lipids, tannins and resins.

Constipation affects at least 14 percent of all adults worldwide. This common, uncomfortable ailment can result from lifestyle choices (like a poor diet), inactivity or drug side effects. Medical conditions can also cause it (x).

Constipation relief is probably the most classic application of cascara sagrada. It’s a “stimulant laxative” and works by triggering increased muscle contractions (peristalsis) in the intestine. This helps to move stool along the bowels to cause a bowel movement.

It’s so effective, in fact, that it was commonly present in over-the-counter commercial laxatives at one time. In 2002, however, the U.S. FDA banned it from use in these products. The agency claims there isn’t enough research to deem it safe and effective. Now, cascara sagrada is only available as a supplement or prescription (x).

Taken in the evening or just before sleep, this herb works well for mild constipation. However, one should not take it regularly or for prolonged periods of time. Using any stimulating laxative for more than 1-2 weeks can cause “intestinal sluggishness.” This means your body begins to depend on a laxative to have a bowel movement. In addition, excessive use of laxatives can cause dangerous electrolyte imbalances (x).

There is also another another concern with ingesting too much cascara. As already mentioned, cascara contains a compound called emodin. Some research suggests that taking high levels of emodin for prolonged periods of time can lead to liver, kidney and reproductive damage (x, x).

While very effective, reasonable and moderate use of cascara for constipation is recommended.

Hemorrhoids are another painful and common condition that may subside by taking cascara sagrada — particularly if the condition results from bearing down forcefully.

Due to its well-known laxative abilities, you can move your bowels much more comfortably. Therefore, there’s minimal strain involved, which can help reduce the development of hemorrhoids (x).

May Support and Detox the Colon

The colon, also called the large intestine, is one of the most important body organs for healthy digestion. As nutrients and food move through the digestive tract, your small intestine sucks up all the useful stuff before passing the rest to the colon.

In the colon, water absorption occurs and colon bacteria break down the remaining materials and send them to the rectum for removal. If you have a slow colon or regular spells of constipation or bloating, waste and toxins are less efficiently excreted. As a laxative, cascara sagrada can help with this.

By encouraging peristalsis (contractions), it can also help strengthen the colon muscles.

In vitro studies suggest that these compounds are effective against various strains of bacteria, including E. coli, Helicobacter pylori and several types of Staphylococcus aureus. It also may have antifungal activity against Candida (x).

Cascara sagrada extract, specifically its compound emodin, also has the potential to promote emotional well-being, ease anxiety and improve other conditions associated with the nervous system.

Studies done in the lab, and some animal studies, suggest that emodin can exert an activity on the receptor signaling mechanism of the brain.

Animal models show that it can process serotonin as well as prevent amnesia in induced subjects (x).

Other potential uses of cascara sagrada include the treatment of liver disease and gallstones, but there are currently very few studies to back up these claims.

Because of its laxative properties, slimming and diet teas sometimes add cascara. This use of laxatives is controversial because their excessive use could lead to electrolyte imbalances, dependency and liver and kidney damage over time.

The anthraquinones in cascara are currently being studied for their potential use in cancer management and treatment.

Again, it’s emodin that’s generating a little bit of buzz. In vitro studies show that emodin can hinder a variety of cancers in humans, although it’s unclear how it does so (x, x, x).

Even though the mechanisms are still unknown, emodin demonstrates both anti-tumor and cancer cell death under lab conditions. Experts suggest that emodin may eventually be useful as an additional treatment to conventional cancer treatments.

Unfortunately, there are very few studies on animals or humans on this subject at the moment. More clinical trials are necessary before we know cascara’s real potential for this purpose.

Common side effects of cascara sagrada include cramps and stomach upset. Children under 12 should not use cascara (x).

It may be harmful to take cascara for longer than a 1-2 week period. Possible serious side effects associated with long-term use include muscle weakness, dehydration, low electrolyte levels in the blood, heart problems and liver and kidney damage (x).

This herb may interact with medications like stimulant laxatives, diuretics, blood thinners, corticosteroids, Lanoxin (Digoxin) and any oral medications. You should also not take Cascara with licorice, horsetail, herbs with cardiac-glycosides and herbs and supplements with chromium (x).

This supplement may turn urine a reddish color, which is not harmful.

As a dietary supplement, take 900 mg (heavy 1/2 tsp) once or twice daily, or as directed by a physician. Drink plenty of water to avoid dehydration and stomach discomfort. Provided suggested serving sizes are adhered to, this supplement should be safe to take for healthy adults. However, those with GI disorders and pregnant/nursing women should not take this product.

Check with your physician before taking cascara sagrada extract if you’re currently taking medications or have any health issues.

Stimulant laxatives for constipation are usually a last resort after exercise, diet and other therapies fail. When that time comes, however, cascara sagrada extract is an effective one. By promoting peristalsis, this supplement can provide relief to occasional constipation. It can also help prevent or promote healing of hemorrhoids.

Formerly a common ingredient in commercial laxatives, it’s now only available as a dietary supplement or prescription. As useful as cascara sagrada can be, taking it for longer than 1-2 weeks at a time could be counterproductive, or in more extreme cases, dangerous. Used appropriately and only as needed, though, it can contribute to digestive health and therefore overall well-being.