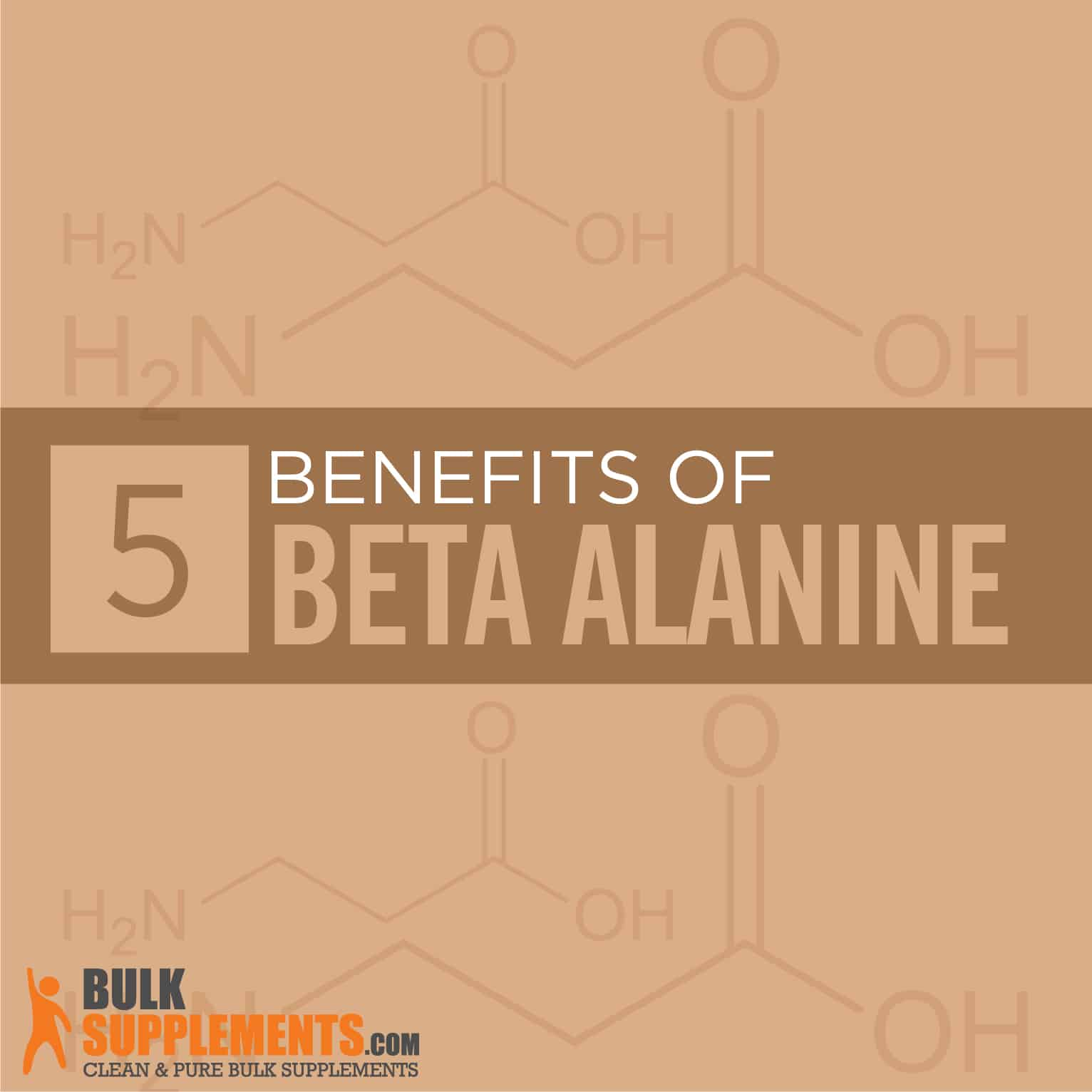 People who frequently visit the gym, body build or those just looking to lead healthier lifestyles overall have likely heard of the benefits of dietary supplements that aid in sports performance. Supplements have varying benefits, but one supplement that is growing increasingly popular in the athletic community is beta-alanine. According to studies, in its supplement form, beta-alanine may be effective in helping increase muscle mass and reducing fatigue. The researcher responsible for many of the studies on beta-alanine is Dr. Roger Harris, who was one of the first to bring the term to the bodybuilding world.

In order to understand and effectively use beta-alanine as a supplement, it’s important to understand it as a natural substance in the body. What effect does it have? Why do people use it? And is it right for you?

For a long time, experts considered histidine a semi-essential amino acid. However, some studies label it an essential amino acid, showing that the absence of dietary histidine is associated with the body’s failure to produce red blood cells (x). Histidine is essential for producing histamine, a vital chemical the body uses for breathing, digestion, immunity and sexual function (x).

The body uses histamine to create myelin sheaths, the protective layers that surround the nerves in the body. This is important because research states it provides protection against the effects of degenerative neurological diseases. Histidine works with beta-alanine to create carnosine, which is stored in the skeletal muscles to strengthen bones and promote endurance during exercise. According to research, histidine is used to potentially treat conditions like arthritis and anemia and also alleviate allergic reactions. Additionally, its other uses include reducing high blood pressure, acting as skin protection from the damaging effects of UV radiation and aiding sexual pleasure.

Carnosine is a dipeptide synthesized by carnosine synthase from beta-alanine and L-histidine (x). Naturally it acts as an antioxidant, promoting sensitivity of muscle fibers to calcium in order for the bones to absorb and strengthen through the process. Its largest concentrations are in the heart, muscles and the brain (x). In its natural form, carnosine helps fight free-radical damage in the cells and also prevent abnormal proteins from forming in the body.

What Does Carnosine Do?

Research reports that carnosine may play a role in cell damage associated with chronic diseases such as type 2 diabetes as well as neurodegenerative and cardiovascular diseases (x). Carnosine is also a natural neuroprotective agent that supports circulation to maintain blood and oxygen flow to the brain. In one study, researchers noticed that carnosine had a positive effect on animal subjects with cerebral ischemia, which is blood-supply deficiency in the brain (x). Research also associates it with protection against damage that may cause Alzheimer’s disease, irregular blood sugar levels and even types of cancer. Carnosine is also a natural component in the wound- and digestive-healing processes.

What Is Beta-Alanine Used for?

Beta-alanine, as a dietary supplement, aims to increase overall muscle capacity and aid in promoting high intensity workout performance. However, experts suggest that insufficient levels of natural beta-alanine may result in serious health complications. For example, lack of beta-alanine may interfere with brain and nervous system function.

Beta-alanine is a popular supplement for sports training and athletic performance. You may have even heard the name thrown around in the gym or in health food stores. But what does the research have to say about it?

According to research, it may have the ability to promote a longer, healthier workout and resistance during gym training. Studies state that supplementing with beta-alanine may help improve capacity and power during exercise, supposedly most effective during high-intensity activities (x). Research notes that high-intensity training to encourage workout improvements was found “effective and efficient” in one study (x). These studies suggest that continued supplementation with beta-alanine supplementation over time may further enhance performance and lean body mass.

Maintaining the correct amount of beta-alanine levels in the body is important. There are several studies that suggest an association between prolonged periods of low beta-alanine levels and chronic fatigue syndrome (x, x). During a 28-day study, researchers examined the effects of beta-alanine ingestion on 20 soldiers who experienced physical and mental fatigue. At the end of the study, they concluded that beta-alanine had no effect on cognitive behavior, but it did result in an increase in physical power and speed in all the subjects (x).

How Does Beta-Alanine Work?

Beta-alanine is important because it’s a natural substance that helps promote activeness and reduce fatigue in the body, with studies that suggest that the supplement can work in a similar way. Whether you have used the supplement or not, it’s important to know how the product is designed to work in the body. The way to understand this is to gain an understanding about how the natural substance works on its own.

Well, this process requires all the pieces to work together properly in order to do their jobs effectively. That being said, high histidine levels in the muscles and low beta-alanine can limit carnosine levels and disrupt its ability to strengthen the skeletal muscles. So carnosine levels can change depending on the beta-alanine levels.

The muscles absorb beta-alanine much easier, increasing overall muscle capacity and allowing the body to perform more effectively specifically high-intensity exercise. That’s why the supplements also work together, because the natural substances work together in a similar way (x, x, x).

Beta-alanine is an important component in raising muscle capacity and power during exercise. It’s present in the body naturally but it’s also in some foods including (x):

But why would anyone need to take any more of it than what’s already in the body, especially if the body makes it itself?

But the benefits are not just available for athletes or bodybuilders. Beta-alanine may provide the advantages you’re looking for in your everyday workout regime. Even if you’re not athletic. Beta-alanine may help improve muscle function and make you feel less fatigued.

How to Take Beta-Alanine

Beta-alanine is sometimes combined with other sports supplements like creatine and sodium bicarbonate. It is best combined with carnosine because these two substances work together naturally. These combinations may promote longevity and muscle endurance during workouts. Studies show that beta-alanine supplement seems to be safe in appropriate doses (x). However, it’s important to consult a doctor before taking any supplement to avoid any unwanted side effects. One of the main reported side effects of beta-alanine supplements is a tingling feeling called paresthesia.

How Much Beta-Alanine to Take

When to Take Beta-Alanine

Beta-alanine is usually a pre-workout supplement. According to research, beta-alanine should be taken before workouts to help with endurance and offer more benefit to shorter, high-intensity workouts. However, it is not necessary to take the supplement right before physical activity to see results. Most people have to take the supplement for several weeks before they notice any improvement in their overall athletic performance or a reduction in muscle fatigue. If you’re looking for longevity and a way to promote a healthier workout overall, beta-alanine may be able to provide a healthy and long-lasting avenue.

Possible Side Effects of Beta-Alanine

Excessively high levels of beta-alanine can cause lower oxygen intake and an increased amount of free radicals, which are molecules that cause damage in the body. The reactions that take place can interfere with cell energy production and can potentially cause oxidative stress (x).

Taking too much beta-alanine has been linked to GABA-transaminase deficiency, a type of seizure disorder (x). Those who experience this may fall victim to seizures, uncontrolled limb movements, weak muscle tone and excessive sleepiness (x).

Why Does Beta-Alanine Tingle?

People have reported side effects such as itching and tingling as a result of taking beta-alanine. The condition is called paresthesia. While the side effect is widely considered a mystery in the medical community, studies have found that it may be attributed to functions in the central nervous system—primary sensory neurons in the body reacting to the supplement. There is a G-protein located in the nerves of the skin that causes a tingling feeling when it is activated. The tingle fades as the body absorbs amino acids, but it’s best to consult a doctor if you experience this feeling to possibly adjust the dosage (x).

Where to Buy Beta-Alanine

Are you interested in trying beta-alanine as a dietary supplement? Contact BulkSupplements.com to place an order today.

Beta-alanine is a non-essential, natural occurring amino acid in the body synthesized by the liver, converted into protein. Amino acids overall are an essential part of daily nutrition. Beta-alanine is produced naturally, but sometimes you may need or want an extra boost. Many weightlifters and bodybuilders use the supplement before workouts to be able to train more efficiently. Research states that the supplement may help significantly reduce fatigue and limit lactic acid buildup in the muscles, possibly allowing you to work out harder and longer.

Beta-alanine is a common pre-workout supplement and it is generally safe in appropriate doses. However, any supplement product has the potential to cause unwanted side effects, even if it is safe. Beta-alanine specifically may cause side effects, such as tingling in the skin as it reacts to a protein in the nerves. These statements have not been evaluated by the Food and Drug Administration. This product is not intended to diagnose, treat, cure or prevent any disease. Always consult with a doctor before taking beta-alanine or any other supplement.