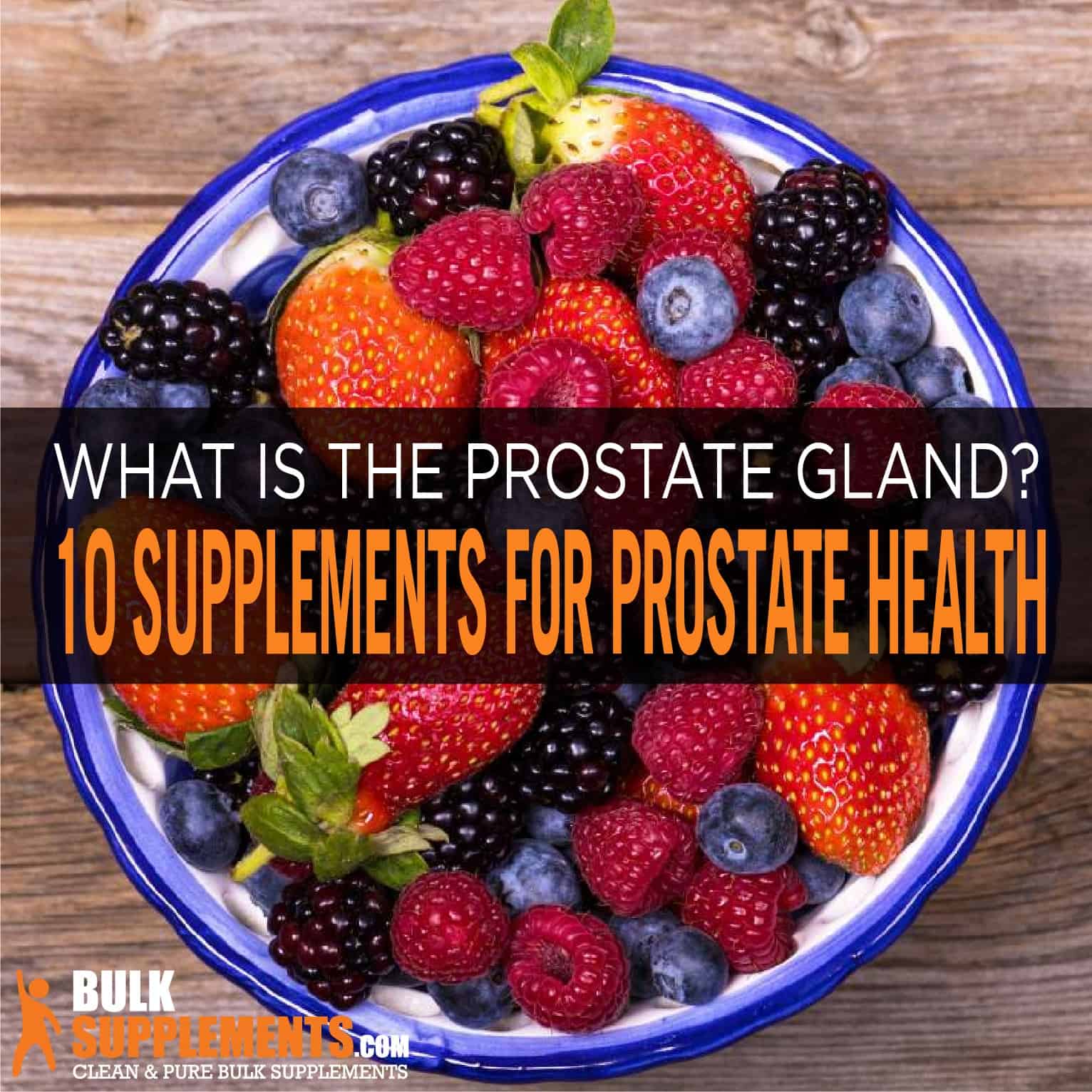 What is the Prostate Gland?

The prostate is a small gland that sits just below the bladder. It produces many of the ingredients found in semen. These fluids protect sperm, increasing their lifespan and helping them move through the urethra (x). In this article we will review the best prostate supplements for prostate health.

As men age, their prostate will often become enlarged. This condition, known as benign prostate hypertrophy (BPH), is commonly seen in men over the age of 50, although it can start much earlier (x).

BPH can affect your bladder, blocking the passage of urine into the urethra. It can also increase the risk of kidney, urinary tract and prostate infections.

BPH is not serious in most cases, although it can cause discomfort. There are a number of effective therapies for the condition, and it can often be managed with medication. In some cases, surgery may be required.

There are a number of common supplements, including zinc, saw palmetto, turmeric and green tea, that may be effective for reducing prostate inflammation in cases of BPH.

Aside fomr BPH, there are a number of other health conditions that affect the prostate. One of the most common is prostatitis, which involves an enlarging of the prostate. Prostatitis can make urination painful, as well as cause pain around the groin (x).

The treatment for prostatitis will depend on the cause. If the inflammation is caused by a bacterial infection, your doctor will likely recommend a course of antibiotics.

Although supplements will not be able to treat prostatitis, there are a number of supplements for an enlarged prostate that may be effective for reducing inflammation.

There are various herbs and vitamins for the prostate that could protect the gland and reduce inflammation. Here are some of the most effective:

Saw palmetto supplements are made from the dried fruit of American dried palm trees.

Research has shown that saw palmetto may be effective for treating and preventing BPH. It may also reduce the severity of urinary symptoms seen with BPH, cutting down the number of times you’ll have to visit the bathroom (x).

Some studies have also shown that saw palmetto extract may be able to slow the growth of certain types of cancer cells in the prostate. It may even be able to block cancer cell receptors, preventing tumors from forming.

Most studies have used a saw palmetto dose of around 320 mg of saw palmetto, divided in two. There are few common side effects, and those that are reported tend to be mild. Some users experience stomach pain, nausea and constipation while taking the supplement (x).

Turmeric has long been used to lower inflammation in the joints and reduce the severity of osteoporosis symptoms. Research has shown that these anti-inflammatory properties might also extend to the prostate.

Studies indicate that turmeric can reduce prostate size in people with BPH. It may be able to fight inflammation in cases of prostatitis. Other studies have shown that turmeric may also fight the growth of cancer cells in the prostate (x).

Doses for turmeric vary depending on the concentration of curcuminoids. In general, you should aim for around ½ teaspoon of turmeric powder per day, as anything more increases the risk of side effects.

Turmeric for the prostate generally considered safe, with few adverse reactions when taken within the recommended dose range. Some users report mild stomach pain, while others report irritation and swelling if turmeric contacts their skin.

Zinc is crucial for proper prostate function. The prostate absorbs over 10 times as much zinc as other types of tissue.

The recommended dose of zinc varies depending on the type of supplement you use. For the best results, use the dose recommended by the manufacturer.

Zinc for the prostate is generally safe if taken at the recommended dose, although large doses can be toxic. Some users may experience stomach pain, nausea and vomiting while taking zinc supplements. These symptoms often go away if you take the supplement with food.

Lycopene is a type of pigment found naturally in many cells throughout the body. It has been shown to have antioxidant effects, reducing the damage of free radicals on cells.

There are higher levels of lycopene found in the prostate than in most other types of body tissue, indicating that the compound may play a role in overall prostate health.

Studies have shown that people who consume large amounts of lycopene have a lower risk of developing prostate cancer (x). The exact mechanism by which lycopene protects the prostate is still not known, although it may be due to antioxidant activity.

Studies have used doses of lycopene ranging from 5 to 15 mg. For general prostate health, a dose of around 6 mg should be sufficient.

Lycopene is well tolerated by most people, although some users report mild gastrointestinal discomfort.

Green tea contains a variety of antioxidants, which may lower the risk of developing cancer, as well as slow cancer progression. Research has shown that green tea is effective in lowering the chances of developing prostate cancer (x).

Other studies have shown that green tea may also have positive effects for people with BPH and prostatitis. It can fight inflammation, reducing the size of the prostate and preventing urinary symptoms.

Green tea doses vary widely, and there are also a number of supplements that come in extract form. If you are drinking tea, a few cups per day should be sufficient. With an extract, follow the manufacturer’s dose recommendation for the best results.

Green tea is well tolerated by most people, with only a few mild gastrointestinal side effects. It does contain caffeine, so drinking it late in the day could affect sleep.

Curcumin is the active ingredient found in turmeric. Instead of turmeric, you can supplement with curcumin directly, positively leading to increased anti-inflammatory benefits.

Studies with curcumin have shown that it can reduce prostate size in people with BPH. It may also be able to help those with an inflamed prostate, which reduces the severity of urinary symptoms, although more studies are needed to see if these results are also seen in humans (x).

There is also some evidence that curcumin can lower the risk of developing prostate cancer. It does this by disrupting communication between cancer cells, which can help prevent tumors from forming (x).

Like turmeric, curcumin is generally safe when taken within the recommended dose range. The only common side effects are mild stomach pain, constipation and diarrhea, which can usually be avoided by taking the supplement with food.

There is no standard medical dose for fish oil, and the amounts of omega-3s in supplements varies widely depending on the company. A common dose is around 500 mg of DHA and 500 mg of EPA, the two main omega-3s found in fish oil.

Most users report few side effects with fish oil, although high doses may cause some mild stomach pain and digestive issues. High doses of fish oil can also lead to large drops in blood pressure.

Ginger is a natural supplement used to treat a wide range of health conditions, including osteoarthritis, morning sickness and high blood pressure. There is research that shows that ginger may also lower the risk of developing prostate cancer (x).

Most of the studies looking at the role of ginger on prostate supplements health were conducted in mice, so much research is needed to understand the role that it plays in humans.

There is no standard medical dose for ginger, with dosages varying widely depending on the study. A good starting dose is around 1 gram of ginger extract per day. Studies looking at the role of ginger in preventing cancer have used a dose of around 2 grams per day.

There are few common side effects seen with ginger supplementation. Some users may experience mild digestive discomfort, and there are also some rare cases where people are allergic to ginger.

Resveratrol is a compound found in many fruits and plants, and is most famously known for being in red wine. It has strong antioxidant activity, and has been shown to reduce inflammation. Some studies have also found that it may play a role in reducing prostate size.

Studies in animals have found that resveratrol helps reduce the size of enlarged prostates. It may also help prevent the prostate from getting enlarged in the first place (x).

Although these findings are promising, more research is needed to see if resveratrol has the same effects in humans.

There are few side effects seen with resveratrol supplementation. The compound may interact with common blood thinners such as warfarin.

Doses of resveratrol vary widely by supplement. Many contain around 500 mg, which is lower than the amounts used in most studies. To get therapeutic benefits from resveratrol, you should aim for a dose of around 2 g per day.

Spirulina is a supplement made from algae and has been shown to have a number of positive effects on immune system health. It may improve immune function, possibly lowering the risk of prostate infections. However, there is no research examining the role that spirulina plays on prostate health.

Few side effects are reported with regular use of spirulina. It may cause some mild stomach pain and digestive issues if taken without food.

There is no standard dose for spirulina. For best results, take the dose recommended by the manufacturer.

The prostate is an important gland for healthy male sexual function. It produces many of the fluids that protect sperm, so proper prostate function is needed for reproduction.

As men age, their prostate often becomes enlarged. This condition, called benign prostate hypertrophy (BPH) can cause urinary pain and discomfort. Although not serious in most cases, it can get worse over time if not treated.

The prostate is also fairly vulnerable to infections. Prostatitis is a common condition where the prostate becomes enlarged and inflamed, leading to pain while urinating. Prostatitis should be treated to avoid further health complications.

There are a number of common supplements that are effective for promoting prostate health. Zinc, saw palmetto and green tea have been shown to improve prostate health, reduce inflammation and possibly lower the risk for cancer.

Other supplements, such as resveratrol, spirulina and ginger, may have some benefits for prostate support, although more research is needed.