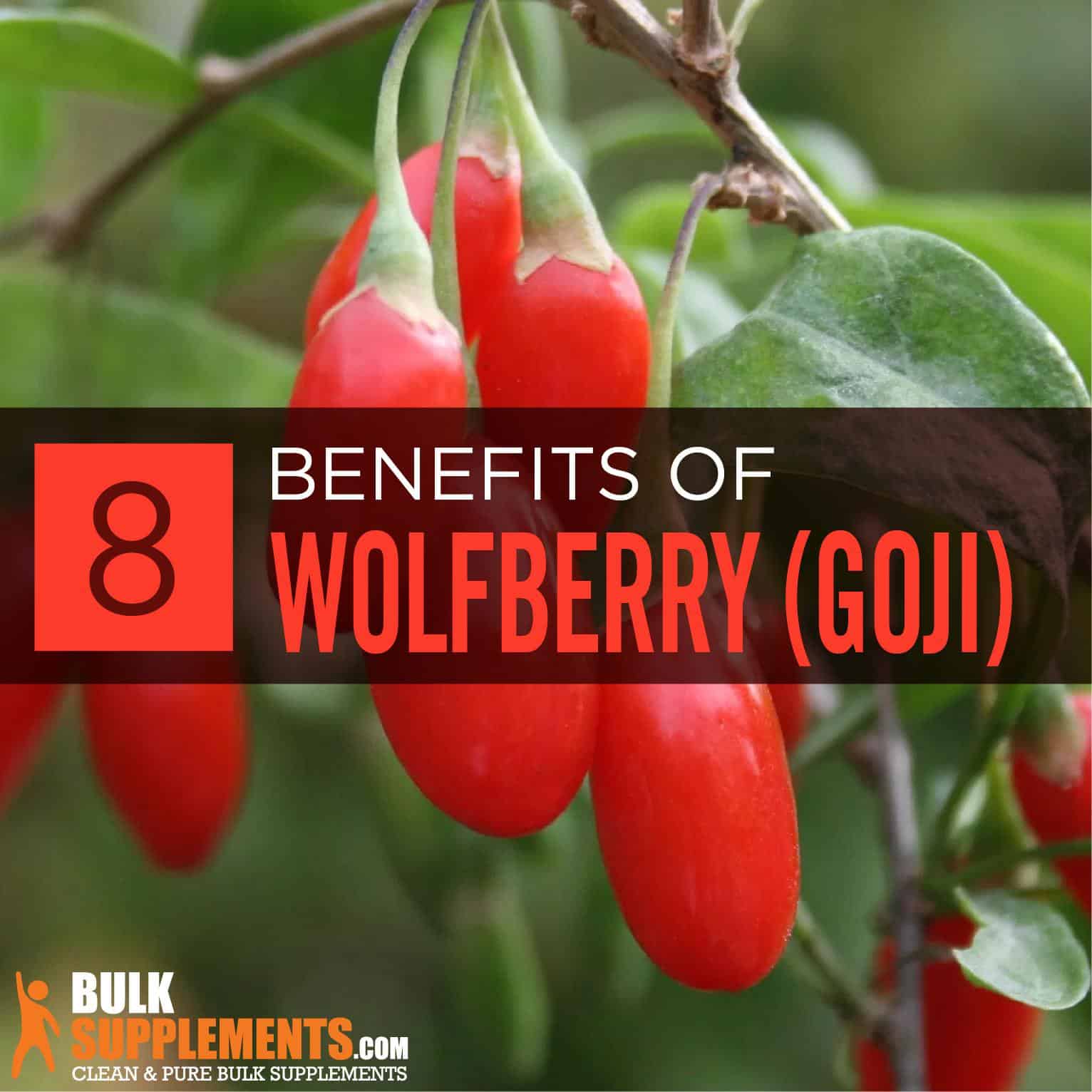 What is Wolfberry Extract?

For thousands of years, wolfberry, also called Goji berry, provided strength and stamina while preventing severe illnesses from developing in those who consumed the powerful fruit. (x) As long ago as 200 BC, there are references in ancient Chinese literature about the benefits of wolfberry. Referred to as Kei Tze in ancient Chinese and Lycium barbarum in Latin, this tiny orange berry provides support for the kidneys and liver, including aid in the overall health of your immune system.

Today, wolfberry is one of the most favored Traditional Chinese Medicine (TCM) herbs regulated as a foodstuff used for nutricosmetics. Nutricosmetics are products and ingredients that act as nutritional supplements to care for nails, skin and hair toward natural beauty. Working from within your body, its popularity is growing. The industry fits our modern culture because consumers are very aware and careful of what they put in their bodies. (x)

Found most commonly in the areas of Northern China, the wolfberry plant cultivates from the Lycium barbarum tree specifically for its medicinal properties. In modern times, businesses have exported the plant to other parts of the world. It grows commercially in many countries now. Credited with its myriad benefits, it is now available internationally for daily consumption.

In addition to its benefits for the immune system, this herb can promote healthy skin, vision and even regulate blood sugar levels. Additional evidence supports wolfberry’s application in improving mood and assisting in blood circulation.

The benefits of wolfberry are far-reaching and may seem incredible, but TCM has mastered this herb with scientific evidence to back their claims. Like any new supplement, talk with your physician about supplements with wolfberry extract.  Benefits include:

The health properties contained within the wolfberry are because of a group of arabinogalactan proteins called LBPs and AGPs — mostly referred to as L. barbarum polysaccharides in Chinese literature. These polysaccharide proteins handle your body’s immune response. These proteins occur naturally in many foods and plants. Yet, wolfberry is one of the best-known providers of these proteins, and it can ward off bacteria and viruses from attaching to your liver and organ cell membranes. As a result, it prevents these pathogens from having a viable host, so they don’t survive. (x) What’s more, wolfberry is an excellent source of ascorbic acid or vitamin C. Taken as a daily supplement, it can promote overall strength and support for your body’s immune system. In this way, wolfberries can help stave off illness in general.

Laboratory trials isolated the wolfberry fruit polysaccharides as the catalyst for this form of treatment and verified the validity of preventing cancer. (x) The trials identified galacturonic acid as the most concentrated chemical among polysaccharides to defend against cancer. The study demonstrated that both the slowing of tumor cell growth and DNA repair is possible with hot water extraction of the polysaccharides.

Wolfberries traditionally strengthen the general health of the eyes. The ability to do so is thanks to its antioxidant properties. A Kansas State University study demonstrated that wolfberry assisted in vision repair for those who have type-2 diabetes. (x)

Additionally, you can treat your eyes with wolfberry extract if oxidative stress caused by free radicals has damaged your eyes. When used in conjunction with other known treatments, vision repair can speed up with additional enhancement. You can even stave off the onset of macular degeneration with wolfberry as an excellent daily supplement to keep your eyes healthy.

Wolfberry may also provide stamina and radically improve the sex drive of male subjects. TCM has used the herb for thousands of years to handle infertility and sexual dysfunction.

In animal testing, wolfberry demonstrated a marked elevation in both drive and function. (x) The polysaccharides mentioned previously are primarily responsible for this response. Potential benefits include an increase in ejaculation frequency and a decreased ejaculation latency. In other words, men gained the ability to perform more often and in closer succession.

The active ingredients of wolfberry may reduce blood pressure. In lab testing, animals with hypertension showed signs of improvement when given its extract. Lycium barbarum polysaccharide (LBP) assists in this regulation and could help prevent and treat hypertension in patients. (x)

There is also evidence to support the use of wolfberry extract for healthy weight management. The participants in a 2011 study experienced a higher metabolic rate and decreased waist circumference. (x) In animal testing, rats also dropped in body mass when taking Lycium barbarum. It’s because of the higher level of caloric expenditure which stems from a higher metabolic rate.

That means good news for those looking for a healthy way to shave off a few pounds. Though this is not the major effect of wolfberry, it is a positive side effect for those hoping to support their weight loss attempt with supplements.

Additionally, a 2011 pilot study found that wolfberry can trigger an increase in mood. When taking it daily, one might also benefit from a general sense of well-being.

For a long time, wolfberries have successfully prevented and treated diabetes. The evidence stems from the increase in metabolic rate and caloric expenditure. Because of the increased metabolic rate and weight loss associated with wolfberry, preventing late-onset diabetes might also be on the list of benefits.

It’s best if treatment of diabetes is under medical supervision, as incorrect management can cause serious health consequences. Consult with a medical professional before adding a supplement to your diet.

With volumes of literature and clinical trials, the reports of wolfberry are surprisingly positive. That said, some minor side effects could occur with the use of this extract.

It is always a good idea to consult with your physician before trying a new supplement. Minor medical issues might worsen when using wolfberry.

Though rare, wolfberries can cause an allergic reaction. Those individuals who have a high risk for food allergies might want to take precautions with wolfberry extract. Clinical observations have indicated those with lipid transfer protein (FTP) allergies can show sensitivity to the berries. (x) Though this is not necessarily a medical emergency, if you feel you are susceptible to food allergies, you should consult with a physician before beginning a regimen of wolfberries.

Though rare, some individuals have demonstrated a sensitivity to sunlight when taking wolfberry extract. (x) This photosensitivity brought on by the supplement’s use was reversed upon cessation of the ingestion of the extract.

According to this study, this is a rare side effect that has almost no reported cases. If you experience sensitivity to light, consult with a physician before continuing wolfberry extract.

Though wolfberries can help treat and prevent hypertension, for those with a preexisting condition of low blood pressure, take caution.

If you feel you already have low blood pressure, consult with a physician and monitor blood pressure levels closely before beginning a wolfberry extract regimen.

There have been rare cases of the wolfberry (Goji berry) extract affecting an increase in the risk of bleeding when taken with blood thinners.

You should consult with your physician before beginning this supplement.

For the optimal benefits of wolfberry extract powder as a dietary supplement, take 1,000 mg (rounded ⅓ tsp) once daily. The extract powder readily dissolves in water. Of course, if a medical professional suggests an alternative dosage, it is best to follow their instructions. (x)

Where to Buy Wolfberry Extract Powder?

You can purchase wolfberry extract powder at BulkSupplements.com. The company is an industry-leading manufacturer and distributor of pure dietary supplements.

Are you interested in trying wolfberry extract powder for your health, as described in this article? Contact BulkSupplements.com to place an order today.

Backed by thousands of years of Traditional Chinese Medicine and its myriad benefits and applications, wolfberries can support many areas of health. It can not only provide treatment for many known ailments, but it can play a role in preventing some ailments. When taken daily, wolfberry provides all the benefits of vitamin C and more, which generally strengthens the immune system.

Wolfberry may also play a role in shrinking tumors and preventing forms of cancer. Helping to rebuild DNA daily helps to stave off cancerous cells from forming and rebuild healthy ones.

The benefit of an extract is that it provides a concentrated level of active ingredients. It also makes digestion easier. In the case of wolfberry, this higher concentration of polysaccharides ensures that you get the best results possible. Taken once daily, it carries with it an added punch and efficacy.

With its track record for having few significant side effects, wolfberry is one of the safest herbal supplements on file. Easy to ingest and internationally available, it can provide the body with added immune health and improved organ function. It can even boost your mood by giving you more energy.