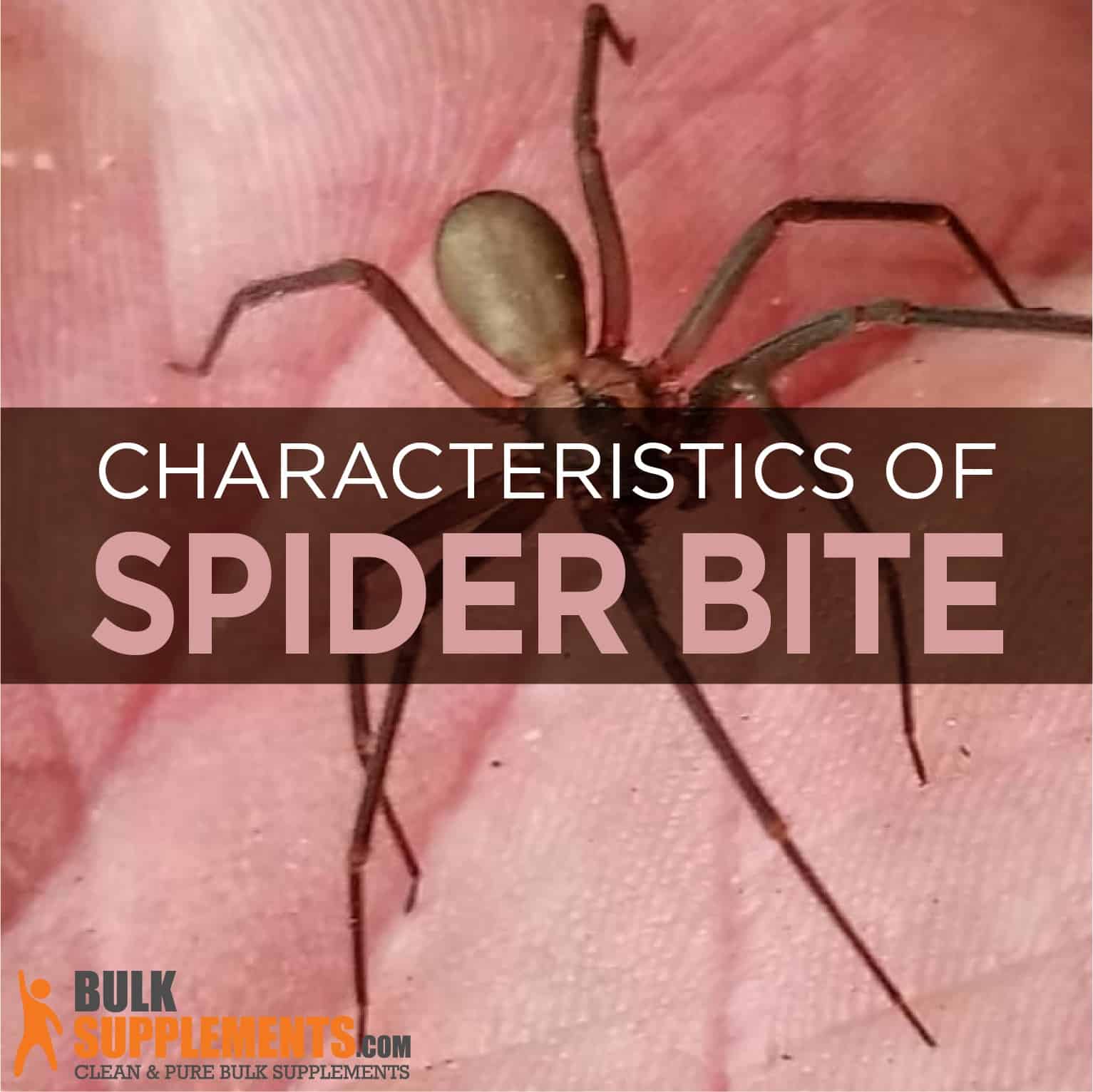 Vitamin B6: Benefits, Side Effects & Dosage

What is a Spider Bite?

A spider bite is also known as arachnidism and simply refers to an injury that occurs as a result of being bitten by a spider. In most cases, the effect of a spider bite is minimal and nothing to worry about.

Basically, you could see very mild symptoms around the region where the bite occurred and nothing further would occur. There is rarely ever any severe pain resulting from a serious injury caused by a spider. Spider bites are quite uncommon occurrences and of all the species that bite, only a few actually cause any real damage (x). Most spider venom, with the exception of very few, has little or no effect. Spider bites that may cause problems are the widow, recluse and the false black widow spiders.

One of the most common spiders that can be found around the home and in gardens is the Phidippus audax, also known as the jumping spider, and can be identified as a black spider with orange dot, or as a black spider with white spot. Insect bites with growing circle could be an allergic reaction with your skin reacting to the chemical substance released by a spider.

An infected insect bite could resemble a severe spider bite, especially if you are reacting to the chemical substances released. You can tell that a bite is infected if you begin to notice redness or it begins to release pus (x).

Characteristics of a Spider Bite

It is a lot easier to identify a spider bite if you see the spider actually biting you. This is because most spider bite symptoms are similar to allergic reactions to a number of other insect bites.

A number of people experience allergic reactions to spider bites which may spread beyond the localized area to other regions of the body. Also, certain spider bites may lead to the body exhibiting some unique symptoms which are generally easy to notice.

If you are bitten and start to experience one or more of these symptoms, seek medical help.

After a spider bite, swelling of the bitten region is a common symptom. The swelling usually begins after a while and may have a distinct red coloration different from the rest of the skin. In some cases, it may resemble a sunburn. However, the difference is that this swelling may persist longer than a sunburn. Similarly, throbbing pain could accompany the swelling. After a few days, it might turn purple. Also, this pain and swelling may not be localized or restricted only to the area where the bite occurred. It may sort across the body upon to the back, chest or belly (x).

Chills, nausea and sweating are all somewhat interlinked since they are all flu symptoms. Experiencing flu-like symptoms after an insect bite could be a clear indication that the insect bite you got was from a spider. Nausea refers to a sensation or an intense urge to vomit or throw up, which stems from some form of irritation and could be very intense. Experiencing a headache after insect bite could also be a clear symptom that you have been bitten by a spider and more specifically, a black widow spider bite. These symptoms could also indicate that you have been bitten by a different spider species. A fever is not a rare occurrence as well (x).

Stomach cramps as a result of a spider bite can vary from moderate to severe and should prompt you to seek medical attention.

Bites from certain spiders such as brown recluse spiders and black widow spiders could cause very severe muscle cramps that could bring about unbearable pain. Similarly, you may experience severe stomach cramping, which may feel like you have appendicitis or your appendix has been ruptured.

If you were bitten by a brown recluse spider, the pain will likely increase for the first eight hours after the bite before it begins to subside (x).

If you are bitten by anything and begin to have trouble breathing, seek medical attention immediately. This may be a result of the bite or an allergic reaction to the bite (x).

Some other symptoms of a spider bite include bite marks, which indicate the exact point where the bite occurred.

Similarly, an insect bite with bruising around it could indicate that a spider was the culprit. An insect bite that turns purple after a few days is typical of spider bites that have become infected.

Insect bite infection could occur if the spot that was bitten is not well taken care of, insect bites on the scalp could be pretty difficult to identify especially when you have a thick head of hair, instead, you can get someone to take a look at it for you. Household spider bite symptoms include sweating, itching or rash and headache, amongst others. A white tail spider bite, however, may include swelling, skin discoloration and nausea and vomiting in some cases (x).

Spiders release a chemical substance during the bite. This chemical substance is known as the venom and it is responsible for most of the severe symptoms that victims of spider bites experience. However, the severity of the symptoms depends on factors such as the amount of venom that was injected, the type or species of spider that bit you and the rate of the sensitivity of your body to the venom. Also, certain individuals experience allergic reactions due to hypersensitivity of their bodies, this might increase the severity of the symptoms as well (x).

Black widow venom effects include severe chest, back or belly pain, black widow, headache and sweating, amongst others. Apart from the Black widow, some other venomous spiders include the brown recluse spider, redback spider, brown widow, false black widow and a host of others.

Necrotic venoms work directly on the nerve system and an example of this is venom from black widow spider. Spider venom medicine includes Analgesic, Nonsteroidal anti-inflammatory drug, an Antihistamine. Green spiders such as the green lynx spider seldom bite humans. But when they do, the bite is not deadly however painful it might be (x).

Most of the spider bites that people get are from nonvenomous spiders. When a nonvenomous bite occurs, there is really no cause for alarm. The first step simply involves cleaning up the bitten area using soap and water and the application of an antibiotic ointment to soothe the area. Afterward, you would need to pay close attention to the bite in order to detect any signs of infection. Also, after you have been bitten, you would need to rest, then to reduce pain and swelling, a cold compress works. Finally, elevate the area irrespective of whether it is your arm or leg (x).

Home remedy for spider bites includes aloe vera gel which helps to soothe the skin and essential oils which may help relieve the pain and speed up the healing process. Finger infection treatment stemming from an infected so cute is pretty easy. All you have to do is apply a warm compress or let your hand remain in warm water for 10-20 minutes at a minimum of twice every day. Afterward, apply an antifungal cream or an antibiotic and then leave cover it with a sterile bandage. Spider bites do not typically fade off shortly after, they point where the bite took place could possess some discoloration (x).

These supplements are for use after medical treatment, if it is rewired.

Aloe vera possesses a soothing characteristic that makes them great for inflamed spots such as those caused by spider bites (x).

Plantain leaf extract possesses wound healing abilities and this is namely due to the numerous properties that it boasts of. Some of these include anti-ulcerative, anti-oxidant, antifungal, antibacterial and anti-inflammatory properties (x).

You can use this as a topical treatment or as a supplement, consult your doctor and determine if this would be useful in your situation (x).

Chamomile extract is known for its ability to treat a very wide range of human ailments including hay fever, muscle spasms, inflammation, insomnia, wounds, ulcers, hemorrhoids and rheumatic pain among others (x).

You can take chamomile extract once or twice a day in dosages of up to 800mg, or as directed by your physician (x).

Witch hazel is touted to possess antiviral and anti-inflammatory properties. These are very useful in treating a series of ailments including scalp sensitivity, acne and hemorrhoids.

A spider bite is generally not a cause for alarm as most are non-venomous in nature. However, it is essential that you take care of every bite to avoid infection. Similarly, keeping your surroundings clean and free of insects/ arachnids is one precaution that you should always take.

However, if you notice severe symptoms such as nausea, trouble breathing, cramps, fever or chills, you should seek medical attention immediately.

You can support skin health and wound healing with a variety of supplements. These include aloe vera and chamomile extract, among others.

Vitamin B6: Benefits, Side Effects & Dosage