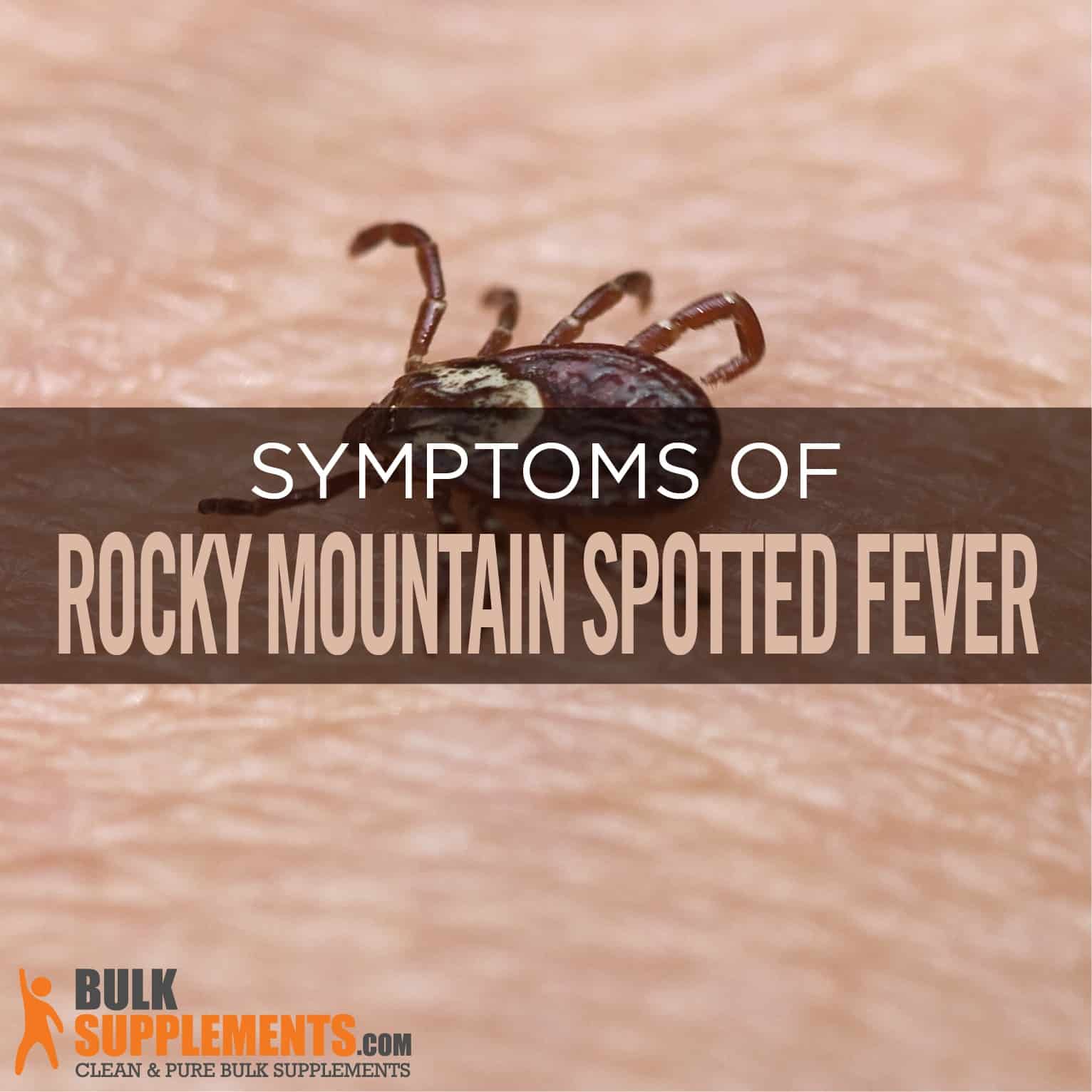 What is Rocky Mountain Spotted Fever?

Rocky Mountain spotted fever, or RMSF, is an illness resulting from the bite of a tick infected with the bacteria Rickettsia rickettsii. Despite its name, it occurs frequently in the southeastern and south-central United States. States like North and South Carolina, Tennessee, Georgia, Virginia and Oklahoma see many of the newly reported cases. All 50 U.S. states, Canada, Central and South America report cases of RMSF (x).

The number of reported cases of RMSF in the U.S. range from 300 to 1,200 per year. This number has been increasing, however. A majority of the cases occur during spring and summer months when ticks are active and people are more likely to be outdoors. Children under the age of 15, but most commonly between the ages of 5 and 9, are most likely to become infected (x).

This disease can be fatal if not treated promptly. As a result, if a person shows signs of RMSF, he or she usually receives antibiotics even before laboratory tests confirm an infection. Early treatment usually leads to good outcomes with no lasting effects. Delayed treatment, however, can lead to permanent damage and even death (x).

Taking steps to prevent tick bites as well as recognizing the signs and symptoms of RMSF can go a long way in minimizing chances of infection and complications.

Rocky Mountain spotted fever is a vector-borne illness, meaning ticks spread it while feeding on human hosts. Three species of ticks can carry the bacteria that causes RMSF. The most common of which are (x, x):

These ticks aren’t always infected with R. rickettsii. In fact, only about one in 1,000 ticks carry the bacteria. Therefore, being bitten doesn’t necessarily result in an infection. Moreover, a tick that’s been attached for less than 20 hours, even if infected, is less likely to transmit the bacteria (x).

Unfortunately, many people don’t realize when a tick is attached to them. In fact, only half of people infected with RMSF report knowing they were bitten by a tick (x). Those who spend time outdoors in wooded areas or areas with long grass (places where ticks live) have a greater chance of contracting vector-borne illnesses including RMSF. Pets like dogs and cats can also bring ticks in from the outdoors (x).

When an infected tick feeds on a human host, the R. rickettsii bacteria infect the cells that line blood vessels in the body. The blood vessels become more permeable and lose their ability to act as a barrier within the body. This in turn is what causes the symptoms, which can be very dangerous if not treated quickly (x).

Symptoms of RMSF begin to appear within a few days of a tick bite. Sometimes, however, it could take up to 14 days. At first, symptoms may seem nonspecific and include (x, x, x):

Approximately 2-4 days later, a rash usually develops on the skin. It produces small red or pink dots that start on the wrists and ankles and then spreads over the body. Some rashes appear as larger blotches. About 10 percent of people with RMSF never develop a rash, however (x).

If treated early, the infection usually resolves with no lasting complications. In some cases, however, RMSF can cause serious complications such as (x, x):

Very young and very old people, as well as those with a specific genetic condition called glucose-6-phosphate dehydrogenase (G6PD), are at a greater risk of developing complications (x).

The antibiotic doxycycline is the primary treatment for this condition. Doctors may also choose to prescribe tetracycline and chloramphenicol (x). Before antibiotics, the fatality rate for those who contracted the illness was around 30 percent. Even now, 3-5 percent of those who become infected die due to weak immune systems or delayed treatment (x).

Because of the potential dangers of RMSF, treatment may be started before there is even a confirmation of infection. If someone begins to show signs of the disease, even if he or she can’t recall being bitten by a tick, doctors may prescribe antibiotics to be safe (x).

In most cases, however, if medication is administered early enough, people can make a full recovery with no lasting effects (x).

The Centers for Disease Control and Prevention encourages people to protect themselves from vector-borne illnesses by taking the following steps to avoid tick bites (x):

Unfortunately, no natural or herbal remedies can cure RMSF (x). However, there are some natural options to help manage some of the uncomfortable symptoms. Always check with your doctor before using them.

Research shows that ginger can help quell an upset stomach. As a tea, it can be a comforting way to ease nausea and rehydrate during a RMSF infection. After fully recovering from RMSF and getting the okay from your doctor, ginger as a dietary supplement can help reduce inflammation, oxidative damage and pain from arthritis (x). Take 1,000 mg of ginger extract powder daily, or as recommended by your physician.

Like ginger, chamomile in the form of tea is gentle and safe. It can improve digestion, relieve painful joints and promote relaxation and sleep (x). It can even be used a dietary supplement pending your doctor’s approval. As a supplement, take 800 mg of chamomile extract powder once or twice a day with water or as suggested by your physician.

Research shows that peppermint essential oil helps reduce the pain of headaches (x). In addition, the menthol in peppermint oil can actually cool the body down during a fever when applied topically (x). Choosing a good quality essential oil and diluting it with a carrier oil such as coconut or jojoba oil will reduce the chance of skin irritation. Don’t apply to skin if there is an active rash, however.

Rocky Mountain spotted fever is a bacterial infection spread through ticks found in Canada, the United States and Central and South America. The species of tick responsible for RMSF differs depending on geographic location. The American dog tick, Rocky Mountain wood tick and brown dog tick have all been implicated.

Symptoms start soon after infection and include fever, headache and a body-wide rash. If caught in time, people generally make a full recovery. If RMSF isn’t identified and treated early, it can cause lifelong health complications and death. Because of this, people are sometimes treated before a confirmation of the infection can be made.

Currently, antibiotics are the only way to treat RMSF. Understanding how to prevent tick bites may be the best form of protection against the illness. Some natural remedies like ginger, chamomile and peppermint can help make people feel more comfortable as they recover.