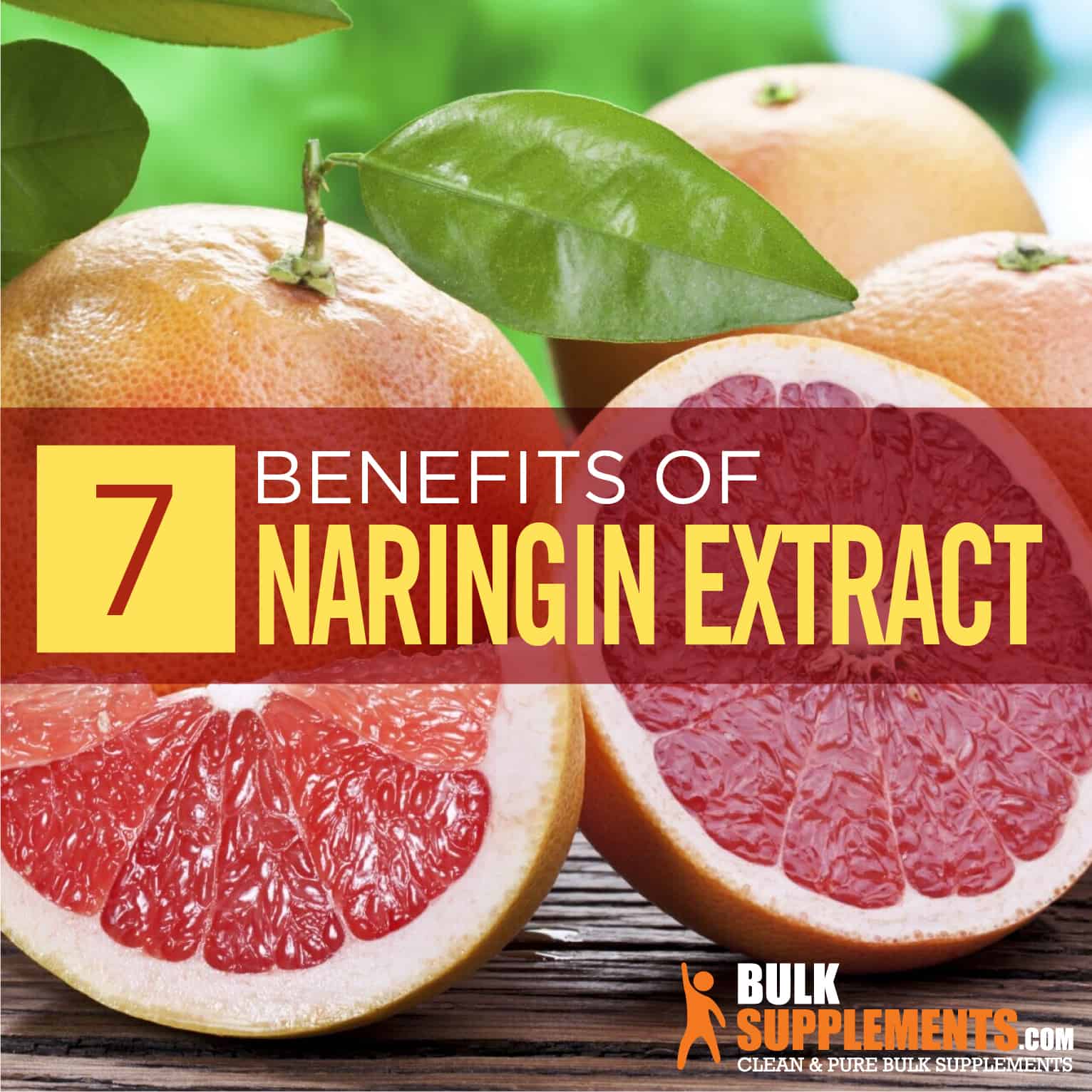 What is Naringin Extract?

Naringin is a water-soluble flavonoid that comes from citrus. First discovered by Albert Szent-Gyorgi, these bioflavonoids are colored pigments in plants and fruit. On its own, it doesn’t have much nutritional value other than adding that well-known bitter taste to citrus fruits. Specifically, people often use naringin in making ice cream, chocolate or tonic style beverages to enhance flavor.

Naringenin (the aglycone of naringin) and naringin supplements, on the other hand, offer a host of valuable health benefits. When extracted, pure naringin extract looks like a yellow powder with a structure similar to hesperidin. As a bioflavonoid, it is rich in antifungal properties and has a high concentration of antioxidants as well. Along with these benefits, it also helps to improve the amount of nutrients that are absorbed into the body. Moreover, it is often useful as a type of preservative in supplements or drinks to make them work more efficiently, increasing the length of their half-life in the bloodstream (x, x, x).

The bioflavonoid naringin can also be found in a blended formula usually paired with other bioflavonoids such as quercetin, hesperidin and rutin.

Where Does it Come From?

The best natural source of naringin is fresh grapefruit juice, along with other pure citrus juices. Naringin is extracted commercially from immature Citrus grandis Osbeck fruit.

Most citrus contains about 5 to 8 percent naringin that can be extracted. In some fruit, though, the concentration is almost nil. And while you can extract naringin from the fruit, leaves and flower buds at all stages of growth, doing so in the early stages produces the best results.

Naringin supplements are natural and generally safe for most users. It has anti-carcinogenic properties, helps lower cholesterol, can boost weight loss and is full of antioxidants that eliminate free radicals (x,x).

Preliminary studies show that naringin may help keep the lining of the stomach safe from damage that occurs as a result of stress, lesions, ulcers or alcohol. The extract works by increasing the blood flow to the stomach while protecting the lining from free radicals (x, x).

Naringin supplements have several powerful antioxidants that work to keep your body safe from damage caused by free radicals. These free radicals cause oxidative damage, which can then lead to heart disease, diabetes and other chronic illnesses. The extract is rich in several essential oils, polyphenols and flavonoids that help keep your tissues safe from radiation and other environmental damage (x, x).

Heart disease is often caused by diabetes, obesity, high cholesterol and certain genetic factors. However, researchers found that taking naringin extract supplement helps to reduce the symptoms of these risk factors. And when these symptoms are reduced, so is the risk of developing heart disease. One study has shown that taking a regular supplement of naringin for 31 days led to measurably lower cholesterol and blood sugar levels as well as a notable loss in overall body weight (x, x).

The extract works on the enzymes that are in charge of regulating glucose. The supplements have shown to lower glucose levels over time while also improving intolerance to glucose and reducing insulin resistance. Grapefruit and its extract have a high concentration of polyphenol nootkatone which helps to improve metabolism. The extract also helps to balance blood sugar levels, control cravings and provides fiber. This all will work to help users with their weight loss or weight management efforts (x,x).

Researchers have found that naringin extract has compounds that help kill at least 60 types of yeast and bacteria. This makes it a great option for those seeking to boost their immune system or naturally fight off certain illnesses. In some cases, it can even be used topically to fight fungal infections and has shown to be just as effective as prescription medications. It works by breaking down the membranes of the bacteria, which causes them to die off (x, x).

Metabolic syndrome, formerly called insulin resistance syndrome, has become more common worldwide. The risk factors are hypertension, hyperlipidemia, abdominal obesity and hyperglycemia, and these affect more than 30 percent of the world’s adults. This syndrome is one of the leading causes of type 2 diabetes as well as various cardiovascular diseases. Poor diet and lack of activity over time are the main causes of this syndrome; but age, family history and ethnicity could also be factors.

Naringin extract is a promising treatment for a range of ailments, including metabolic syndrome. The flavonoid in naringin extract supplements has a high amount of antioxidant activity, which helps to eliminate free radicals and inhibit enzymes.

Experts found that naringin extract and the supplements made from it have no negative side effects in themselves, other than when taken with medications directly effected by it (x, x, x, x).

Dosage and Side Effects

If you plan to take naringin extract, it is best to take 500 mg of the extract once or twice a day, or as instructed by a physician. Though naringin extract is generally safe and has a long list of benefits, there are also a few negative side effects and drug interactions to keep in mind before starting a supplement regimen (x, x, x). Mild but generally common side effects are:

Some studies have linked increased amounts of naringenin to an increased chance of developing breast cancer in postmenopausal women. This is because naringenin changes how the body breaks down estrogen, which could increase the concentration of the hormone in the body. Those who have hormonal conditions or who are suffering from breast cancer should avoid naringenin extract supplements (x).

If you plan to start supplementing with naringin extract, talk to your doctor beforehand if you are taking any of these medications.

When it comes to improving your health without the aid of chemicals or dangerous pharmaceuticals, naringin extract supplements are probably one of the safest choices you can make. You can add naringin to your diet naturally by consuming citrus, especially grapefruit, or you can take a powder or capsule supplement as part of your daily vitamin regimen.

Those looking to lose weight, control their blood sugar, control their high cholesterol or improve their heart health can benefit from taking a daily supplement of naringin. But while it does help boost the immune system, side effects can occur since it comes from a natural source. If you are already taking other medications, it’s important to speak with your doctor in advance.