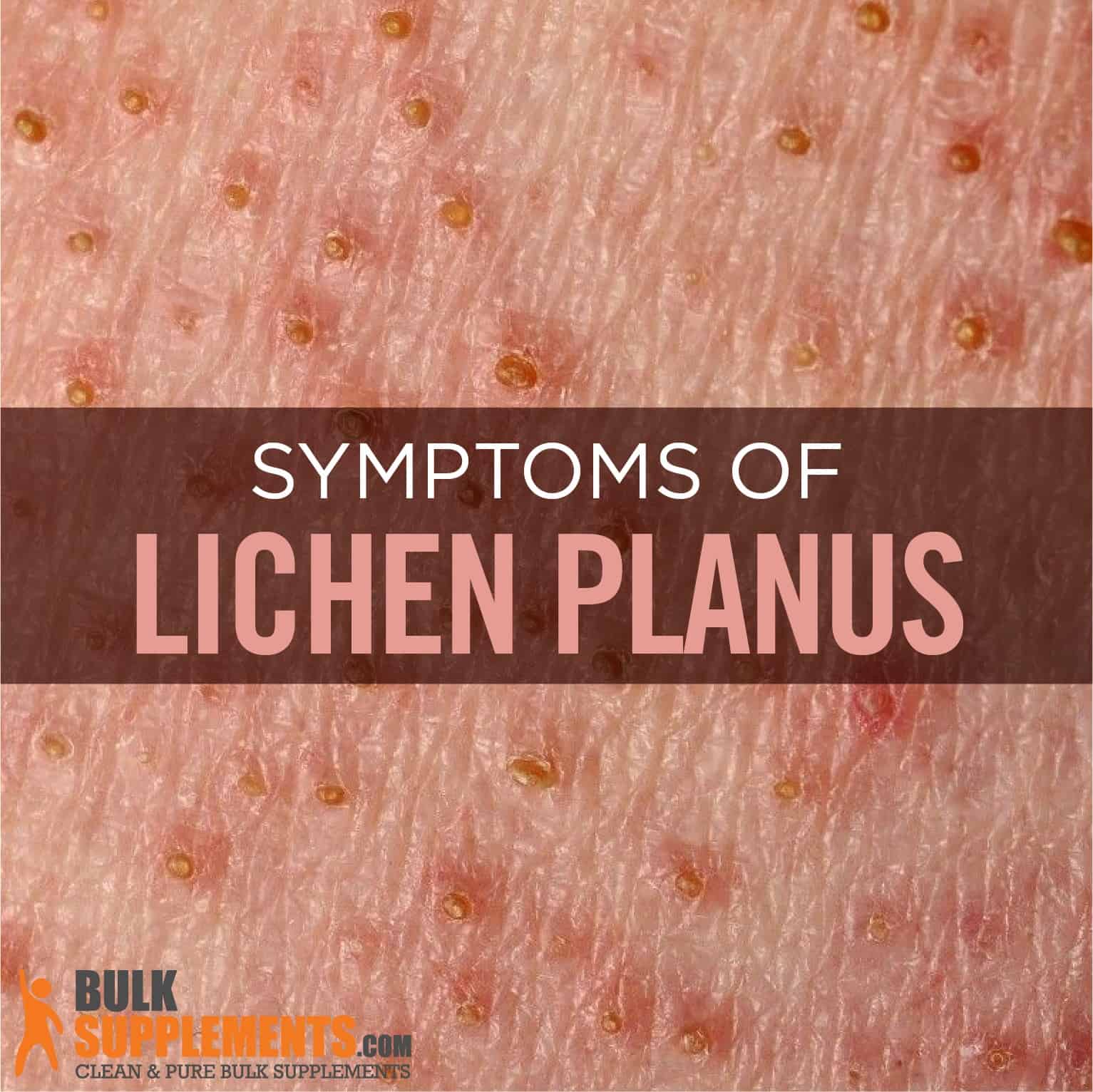 What is Lichen Planus?

Lichen Planus is a relatively uncommon skin disease that affects about 2 percent of people (x). It can affect several different parts of the body including arms, legs, scalp, nails, genitals and mouth (x). In cases where only the mouth is affected, it is often referred to as oral lichen planus.

Lichen planus is not an infectious disease and it is not caused by lifestyle choices. For those who have symptoms presenting in the genital region, it can be mistaken for an STI. However, it is not transmitted by sexual contact, and should not cause shame or worry (x, x).

If the condition is limited to your skin then it will usually clear up within nine months. Until then, it is a matter of managing the symptoms (x). Oral lichen planus may never go away (x). If it does, it can take years to do so (x). Once the condition has cleared up, it is very unlikely to return.

You are more likely to develop lichen planus once you are over the age of 40. The skin condition equally affects men and women, though oral lichen planus is more common in women (x, x).

For many, the symptoms or lichen planus are mild and there is no need for treatment. Only in cases where the rash causes pain will treatment be suggested (x). In a very small number of cases, the condition is classed as erosive lichen planus. In this case, along with the rash, painful ulcers can form in the mouth and on the genitals (x).

Purple or red bumps form in clusters. These bumps are often slightly shiny in appearance and are raised, but have flat tops. The bumps can be between 3-5 mm in diameter. Along with these bumps, there may also be some white streaks. These irregular white streaks are known as Wickham’s streaks (x, x, x, x).

These purple bumps are most often observed on the wrists and forearms, but can appear anywhere on the body. When seen on the ankles, the rash is often thicker and scaly in texture (x, x).

These bumps will appear and disappear over time, with new ones appearing as older bumps fade. Once the bumps do fade, they will often leave the skin discolored for some time (x, x).

The rash associated with lichen planus can be very itchy. The intensity of the sensation varies from patient to patient (x, x).

For men, the ulcers are less likely to form on their genitals and may just be limited to the mouth (x).

White Patches in the Mouth

The hallmark of oral lichen planus is the appearance of white patches in the mouth. The white patches often form on the cheeks, tongue, and gums (x). In mild cases these white patches are painless. In some cases, though they may be sensitive to hot or spicy foods (x, x).

On occasion, lichen planus can affect the nails. It will affect the way they grow. This causes them to become thinner. They will also develop a grooved texture caused by ridges on the surface of the nail. In a small number of cases, the nails may stop growing or even fall out. This is a rare occurrence (x, x).

Patches of red skin rash can form on the scalp. The hair that is surrounded by these rashes will often fall out. In a small number of cases, this hair loss is permanent (x, x).

For men, the purple bumps seen on the wrists can form in rings on the tip of the penis. The bumps are shiny and flat-topped and can be either red or purple in color. The penile rash is usually not itchy (x, x).

For women, the genital rash is much more severe. The rash can form on the vulva or inside the vagina. The rash is often white streaked and the bumps range from red to pink in color. The appearance of the rash coincides with soreness and burning sensations. If the rash forms inside the vagina it can cause narrowing which makes sex painful. Disruption of the rash can lead to a bloodstained discharged. The more severe symptoms are due to the fact the in women the genital symptoms are most often caused by erosive lichen planus (x, x).

The exact cause of lichen planus is unknown (x). However, several factors could play a role in its development.

It is a chronic inflammatory disease that is mediated by the immune system (x) and as such it is often classed as an autoimmune condition (x).

It is thought that lichen planus can be caused by an external factor such as exposure to an allergen or a virus. It has been noted that sufferers of lichen planus are also more likely than normal to be positive for hepatitis C (x).

It has been observed to be caused by some medications (x). Medicines that have been linked to the onset of lichen planus include some anti-rheumatic injections that contain gold. These injections are used to relieve the pain of arthritis or painful joints. Some anti-malarial tablets have also been linked to lichen planus (x). The side effect is rare with these drugs and in the case of combating malaria, most people would agree that it is worth the small risk.

Aloe vera has long been used for its soothing effect on the skin. It is also known to have antiseptic and anti-inflammatory properties as well as being an excellent moisturizer (x, x, x). It is advised that the best way to reduce the symptoms of lichen planus is to keep the skin well moisturized (x, x).

This means that adding aloe vera powder to your favorite skin cream will give you, not only the moisturizing boost of aloe vera, but also the anti-inflammatory effects. As aloe vera has been shown to be non-allergenic this means that you can use it to soothe the itching of lichen planus as you need, without fear of using too much (x).

As well as a topical treatment for your skin you can also add aloe vera to oral ointments and it has been shown to reduce the symptoms of oral lichen planus (x).

You can even add aloe vera into your diet to access even more of its health benefits. As part of your diet aloe vera can have further reaching effects, and it can also act as an antiviral. This can help to address any underlying causes of lichen planus, as well as boosting your general health (x).

It is very easy to add aloe vera into your diet as you can take about ½ teaspoon per day dissolved into a drink of your choice. You may want to talk to your doctor before adding it to your diet if you have any digestive problems, and it should not be taken orally by pregnant or breastfeeding women (x).

If you are diagnosed with lichen planus you will be advised to consider your use of skin products with care. It is often advised that you don’t use any harsh soaps or cleaning products, this can make it difficult to find effective cleaning products, especially for removing makeup. A natural alternative is to use coconut water for cleaning your skin. It is can remove dirt and makeup without removing the protective oils on your skin. The end result is clean and moisturized skin. You can easily make a batch as needed by dissolving coconut powder in water.

Though coconut water can be used to remove makeup it is NOT recommended that you use coconut oil as a cleanser. Coconut oil is highly comedogenic, which means that it will clog your pores.

Keeping yourself well hydrated is an excellent way to keep your skin moisturized, which is one of the key recommendations for anyone suffering from lichen planus (x, x). A lot of us are very bad at drinking enough water to stay properly hydrated, so it might be helpful to know that coconut water is actually better at hydrating the body than plain water (x). This means that you can have a tastier and effective way to keep yourself well hydrated by adding a tablespoon of coconut powder to any drink to get a boost in hydration.

You can also add coconut powder to your diet (x).

Turmeric has long been used in Asian medicine. It is known to have anti-inflammatory, antiviral and antioxidant effects, and it is believed to have some strong immune-modulating effects (x). the combination of these effects means that it is ideal for use against lichen planus. The anti-inflammatory effects can help to reduce the appearance of the rash and the immune-modulating effects could help to address the underlying condition.

Adding turmeric into your diet, therefore, may have positive effects on the appearance and severity of lichen planus. It is easy to take as you only need to include ½ a teaspoon into your diet once a day. This can be done by adding it to a meal, for which it provides a lovely gingery flavor, or you could add it to a drink. It is best absorbed when taken with fats so a drink like coconut milk is ideal (x).

If you have sensitive digestion then you may find you have a small amount of gastrointestinal distress when you first add turmeric to your diet. However, this is likely to pass as your body becomes used to it. If you don’t exceed the suggested dosage then there are no known negative side effects of adding this supplement to your diet. You should just take care when using it as it can dye your clothes and hands a vibrant yellow.

A recent study looked into the effects of turmeric for the treatment of oral lichen planus. It showed extremely positive effects when the turmeric was added to an oral ointment (x). This is still an early study so it is not recommended to try this yourself, however, it is something worth talking to your doctor about as more research is done.

Lichen planus is a chronic, noninfectious, inflammatory condition. It mostly causes rashes on the skin and inside the mouth but can affect other areas of the body. There is no cure for this condition and the only option is to treat the symptoms. For the skin, the best option is to keep the skin hydrated with gentle moisturizers, such as aloe vera. For oral lichen planus, supplements that have anti-inflammatory effects, like turmeric, can help to reduce and manage the symptoms until they pass.