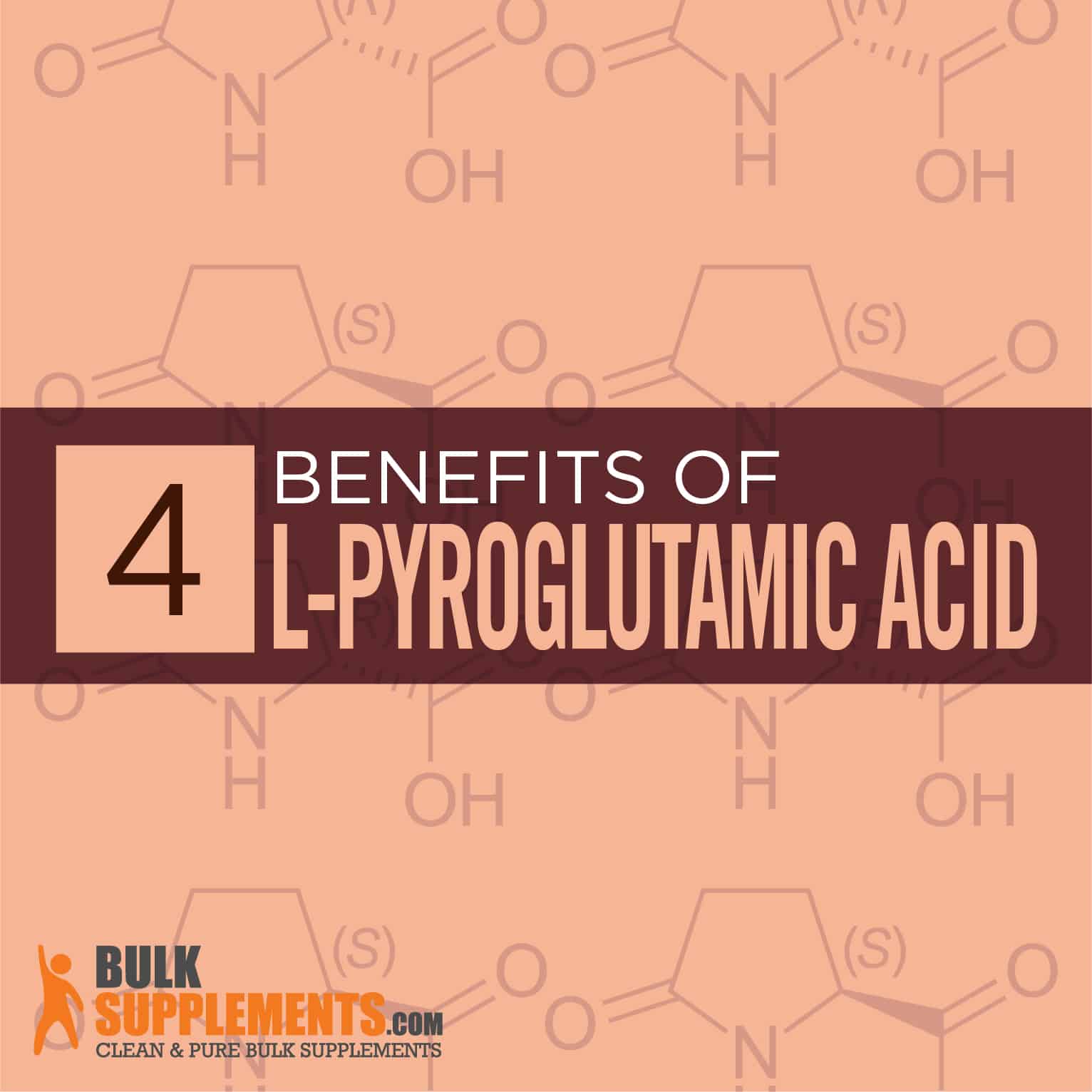 L-pyroglutamic acid is an amino acid that occurs naturally in the body. It is present in the brain, spinal fluid, skin and blood.

You can find pyroglutamic acid in plants and in various foods. It’s also becoming more widely available as a supplement or as an ingredient in supplements.

Glutamine is one of 20 naturally-present amino acids in protein. It’s found in high levels in eggs and in meat products. It’s also abundant in whey and casein proteins.

Glutamine is a key immune system booster and also benefits digestive health. Both your immune system and your GI tract often use glutamine for fuel instead of glucose (x).

Some call it “a forgotten metabolite,” and its complete benefits are currently unknown. But the desire for supplements without nasty side effects–combined with the growing frequency of degenerative brain conditions–make pyroglutamic acid a buzzword in research (x).

Researchers consider  pyroglutamic acid a “nootropic” (x). What exactly is a nootropic?

A nootropic is a chemical (either naturally occurring or man-made) that improves your cognitive health. Romanian psychologist Corneliu E. Giurgea coined the term in 1972.

To be a bonafide nootropic, a supplement must:

Today, many are quick to label chemicals as nootropics even if the chemical doesn’t fit all requirements. In casual conversation, people interchange the words “smart drug” and “nootropic,” assigning the names to anything that enhances cognition. People also commonly call an supplement a nootropic anytime it improves memory, speeds up thinking or boosts mental focus. Other nootropics include:

Transmitting information like memories is a brain function that uses electro-chemicals in a complex communication process. Neurotransmitters are the chemicals that carry messages and send signals between neurons and other cells. The most common neurotransmitters, however, are amino acids like glutamate.

Another important chemical messenger is acetylcholine, or “the memory chemical,” because it helps brain cells communicate with each other. Scientists have experimented with pyroglutamic acid and reported that this amino acid helps release acetylcholine in the brain. The research also concluded that pyroglutamic acid keeps acetylcholine levels stable and even protects it from factors that hinder memory(x). In one study, the use of pyroglutamate increased short and long-term retrieval of memories (x).

In another study of patients with memory loss, researchers gave half of the participants a placebo, and the other half pyroglutamate. After 60 days of treatment, the subjects receiving the pyroglutamate showed a noticeable improvement in memory, while those who received a placebo did not (x).

Reduces the Risk of Cognitive Decline

Within the human body, some cells have the capacity to renew themselves, like those in the liver and the skin. Brain cells, however, don’t share this talent; when a brain cell dies, it cannot regenerate. By age 70, most people have lost 10 percent of their brain cells due to the normal aging process. Besides getting older, other conditions such as diabetes, hypertension and arteriosclerosis can worsen brain cell loss.

In addition, some people develop aggressive brain disorders that further hamper memory and cognitive function. These disorders are marked by reduced blood flow and oxygen to the brain, which means the brain cannot get the fuel it needs. This results in fading memory, mental deterioration and loss of other functions. Two of these well-known brain disorders include:

Researchers are extensively studying degenerative brain conditions like dementia and Alzheimer’s, and have found that some natural supplements like pyroglutamic acid may improve symptoms without harmful side effects. Studies suggest pyroglutamic acid may slow the progression of age-related cognitive decline, boosting memory and learning capacity (x) (x).

If you’re a weightlifter or fitness junkie, pyroglutamic acid could help you stay focused during your workouts. In one scientific study, 15 male volunteers took a complex containing lysine, pyroglutamic acid and arginine once daily. Over the course of the study, the men experienced a prolonged release of growth hormones during exercise that remained consistent over a period of several hours. This study sparked a growing interest in the use of pyroglutamic acid during intense exercise (x).When added to your preworkout, it could help improve your focus, muscle growth and strength.

As long as you stick to the recommended dosage, pyroglutamic acid is safe to take for healthy adults. However, taking too much pyroglutamic acid can result in metabolic acidosis. This condition occurs when there is too much acid in the body, which can put a strain on the kidneys. Metabolic acidosis symptoms may include abdominal pain, chest pain, decreased eyesight, heart palpitations and nausea. Severe cases of metabolic acidosis can be life threatening, so if you experience any of these symptoms, seek medical attention immediately.

Talk to your doctor before taking this supplement if you’re nursing or pregnant. Do not give pyroglutamic acid to children taking blood thinners.

You can find pyroglutamic acid supplements in capsule form or in nootropic complexes.

You can also mix pyroglutamic acid powder into a customized preworkout focus blend. As a dietary supplement, take 1,000 milligrams up to three times daily, or as directed by your physician. For best results, take pyroglutamic acid between meals.

Some people take 100 mg up to three times daily. Take as directed on the supplement package. Pregnant or lactating women, people with diabetes, hypoglycemia and people with known medical conditions and/or taking other supplements or drugs should consult a health practitioner. Additionally, young children or people who take blood thinners like Coumadin and Aspirin should not ingest pyroglutamic acid supplements.

Pyroglutamic acid is an amino acid derived from glutamine. It exists naturally in the human body, but is also present in meat, soy products and some fresh produce.

Research shows that it may boost memory, cognitive health and workout performance without harmful side effects. While research on pyroglutamate continues, existing studies suggest it’s a promising nootropic that can keep your brain healthy well into old age.