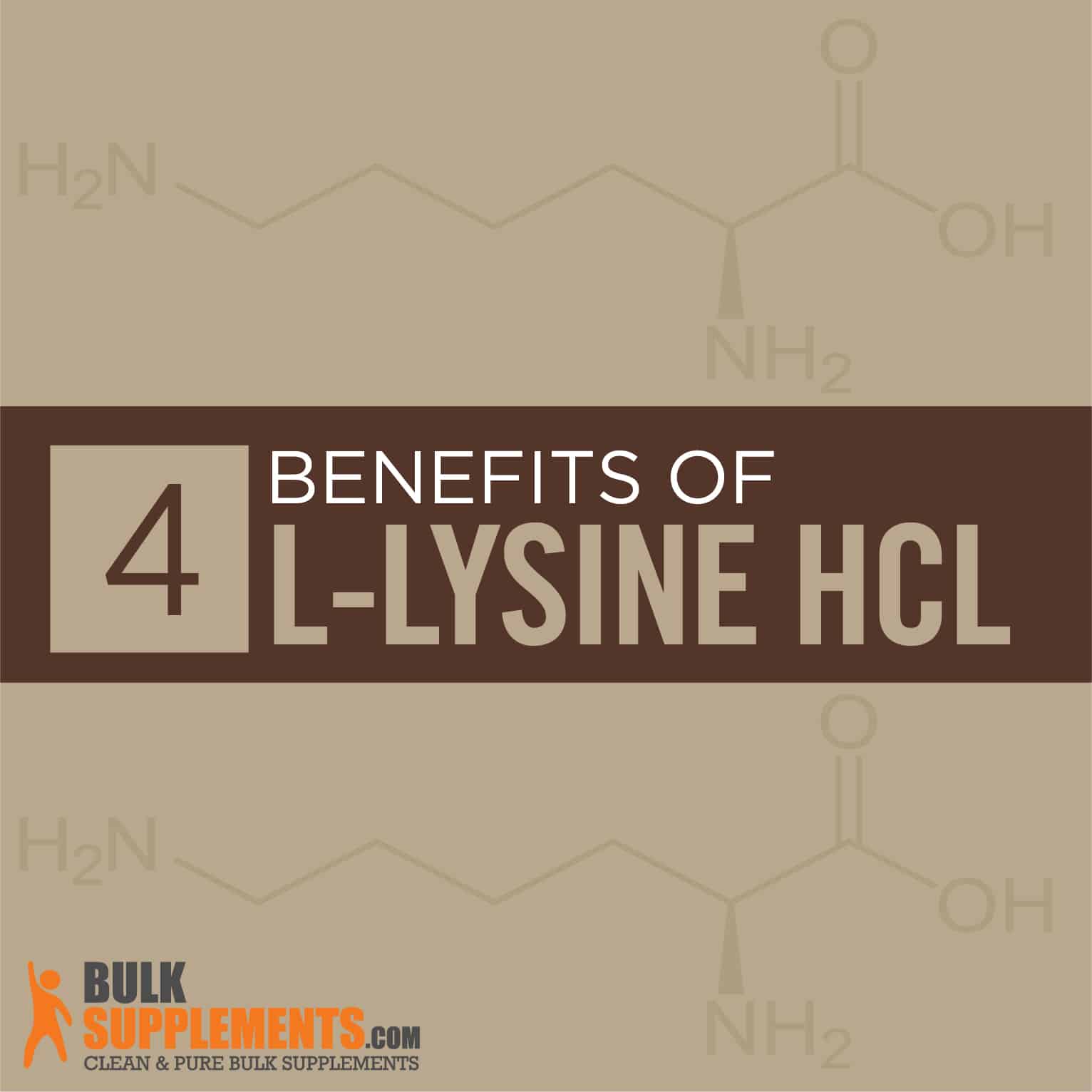 What is L-Lysine HCL?

L-lysine HCL (or simply lysine) is an amino acid most commonly known for its treatment against the herpes virus and cold sores. Its scientific names are 6-diaminohexanoic acid and alpha-epsilon-iaminocaprioic acid.

It may be confusing seeing both “L-lysine” and “lysine” if you’ve ever looked into lysine supplements. L-lysine refers to the form of lysine that’s used in protein synthesis, but is ultimately the same thing as lysine. HCL is often added to lysine supplements to make it more soluble (x).

The cells in your body are always being broken down and restored over and over throughout your life; it’s what keeps our bodies healthy and aids in cell growth and recovery. Lysine assists this constant cycle by producing the necessary amino acids and hormones needed to break down the cells.

Lysine works as a precursor for many different substances that are a vital part of human nutrition. It is an essential amino acid, which means that the human body is unable to produce the substance and must take it in from food and supplements. Because of this, it is important to ensure one consumes this vital amino acid in their daily nutrition intake. One can do this either by knowledgeable food consumption or supplementation.

Considered a proteinogenic amino acid, lysine has a very literal definition. Proteinogenic amino acids are amino acids that are incorporated, or added, to proteins biosynthetically during translation. It is also part of the processes of crosslinking collagen polypeptides, adds essential mineral nutrients to the body and is involved with the production of L-carnitine, which is a crucial property in fatty acid metabolism.

Why Does the Body Need L-Lysine HCL?

The body needs lysine to make carnitine. Although the term may sound more like a type of diamond, carnitine actually assists the body by converting fatty acids into energy. It also helps to improve absorption of calcium and supports the production of collagen. Due to lysine’s role in calcium absorption and muscle health, it is helpful for those recovering from injuries, surgeries and general exercise (x).

Lysine was first isolated and studied from casein (a derivative of milk protein) in 1889 by a German biological chemist named Ferdinand Heinrich Edmund Drechsel. Around a decade after his discovery, German chemists Emil Fischer and Fritz Weigert determined its chemical structure by synthesizing it. Although it has been a known property for a long time, it is still unclear just how beneficial it can be (x).

Just like its other amino acid family members, the leading role of lysine is to aid in the production of protein to repair and promote healthy cell growth throughout the body. Without this essential amino acid, cells would begin to degrade and hinder a range of physiological functions within your body. Aside from its primary role of cell growth and rejuvenation, there are an array of other health benefits that come with a proper daily intake of lysine.

Lysine is famous for its abilities to treat cold sores and canker sores. These sores, as well as fever blisters, are symptoms of a deeper-rooted infection in the body. They typically appear on the lip or around the mouth. These sores can cause irritation, burning, self-consciousness about appearance and pain. If you’ve ever had to deal with cold sores, you know how uncomfortable they can make you feel. Depending on their location, they can make it difficult to eat, drink and talk. Plus, the constant awareness of them being there can cause a lack of focus.

These sores are a result of the herpes simplex virus type 1 (HSV-1), which can lay dormant in your spine without causing any of the symptoms. When you experience times of heightened and lengthened stress, it can impact your immune system negatively. This allows the virus to react and trigger the development of HSV-1 symptoms, including cold sores.

Lysine steps in when the HSV-1 virus has the optimal environment to begin replicating and prevents that from happening, reducing the time frame of the cold sore. It is possible that lysine can block another amino acid (arginine), which is a vital amino acid for HSV-1 to be able to multiply (x).

A study done on 26 individuals who were prone to recurring cold sores found that a supplement of 1,000 mg of lysine, if taken daily, could result in fewer cold sores (x).

Although lysine doesn’t work at the same speed as prescribed medication, it can do a lot to prevent sores from growing worse.

Lysine plays a significant role in the building and maintenance of muscle tissue. Because of this, it is a common supplement used by athletes. If someone has extended periods of low levels of lysine, it could potentially cause a slowdown of protein synthesis. Protein synthesis is an essential part of helping the body rebuild muscle fibers after workouts or strenuous activities. It can even aid in speeding up recovery time. Athletes need to keep their muscles in utmost health to improve their performance, and this makes lysine a potentially vital addition to their daily supplement intake (x).

Lysine has been known to act as a partial serotonin receptor in the body. Serotonin helps to boost mood and bring down symptoms of anxiety and depression. A study done on 108 healthy adults found that by adding a week-long oral treatment of lysine (2.64 g per day), significant improvements of both anxiety and depression symptoms were seen. The study even showed a normalizing of hormonal stress responses (x).

Because lysine assists collagen formation, it can have benefits to making hair and skin healthier. Although lysine does not produce collagen on its own, it aids your body in creating and also absorbing calcium; a nutrient that is necessary for collagen production. Both hair and skin need collagen to get that shine, elasticity and moisture-rich property to them that is much sought after (x).

Where to Find Lysine

The human body is unable to produce Lysine on its own, but it is vital for human health; thus, lysine needs to be consumed from outside sources. Luckily, it can be found in many different foods, especially those high in protein. Here is a list of some common dietary sources for lysine (x):

These are just some of the many foods that contain lysine. This makes it easy to get the daily recommended amount directly from dietary choices. Take note that any animal by-product that is consumed needs to be organic and grass-fed. If not, it will not have the amount of lysine that its healthier counterparts have. It’s also better for you and better for the environment to choose grass-fed and organic options.

If you are looking to take L-lysine HCL capsules, it is best to take one capsule one to two times daily. For L-lysine HCL powder, take 680 mg two times per day.

Like many supplements, however, the optimal dosage depends on a variety of factors. Body weight, health goals, medical history, lifestyle and the reason for taking L-lysine HCL all should be taken into consideration when looking to calculate the ideal dosage for you. Consult with your physician before adding lysine to your daily supplementation, as it could cause harmful side effects if taken in excessive amounts.

Lysine is generally a safe and beneficial supplement to take. Still, though, there are possible adverse side effects it can have on the body. Because it is closely related to proteins, if taken excessively, it can cause a lot of stomach and digestion issues. For this reason, it is imperative to follow the recommended dosage by your doctor. Some but not all side effects include:

Lysine can also interact negatively with certain medications. It increases the absorption of calcium, so it is best not to consume large amounts while also taking lysine.

There has not been enough research done on the safety of taking lysine while pregnant or breastfeeding. If you already struggle with kidney, liver or digestive issues, it may not be safe to take lysine. For any reason, it is always best to consult with a medical professional before adding it to your regimen.

Lysine is an essential amino acid that the human body needs to be healthy. It aids in the recovery of muscles and bones, assists with calcium absorption and plays a significant role in cell growth and rejuvenation. Because it is an essential amino and the body is not able to make it on its own, it needs to be consumed via food and supplementation. Luckily, lysine is present in many of the foods that we eat on a daily basis.

As vital as this amino acid is, more research is necessary to understand the effects of taking lysine long term. L-lysine HCL is not a substitute for prescription medication, but can aid in prevention and healing. It is best to speak to your doctor before beginning any lysine regimen.

By Christian Jean Francia
About the author