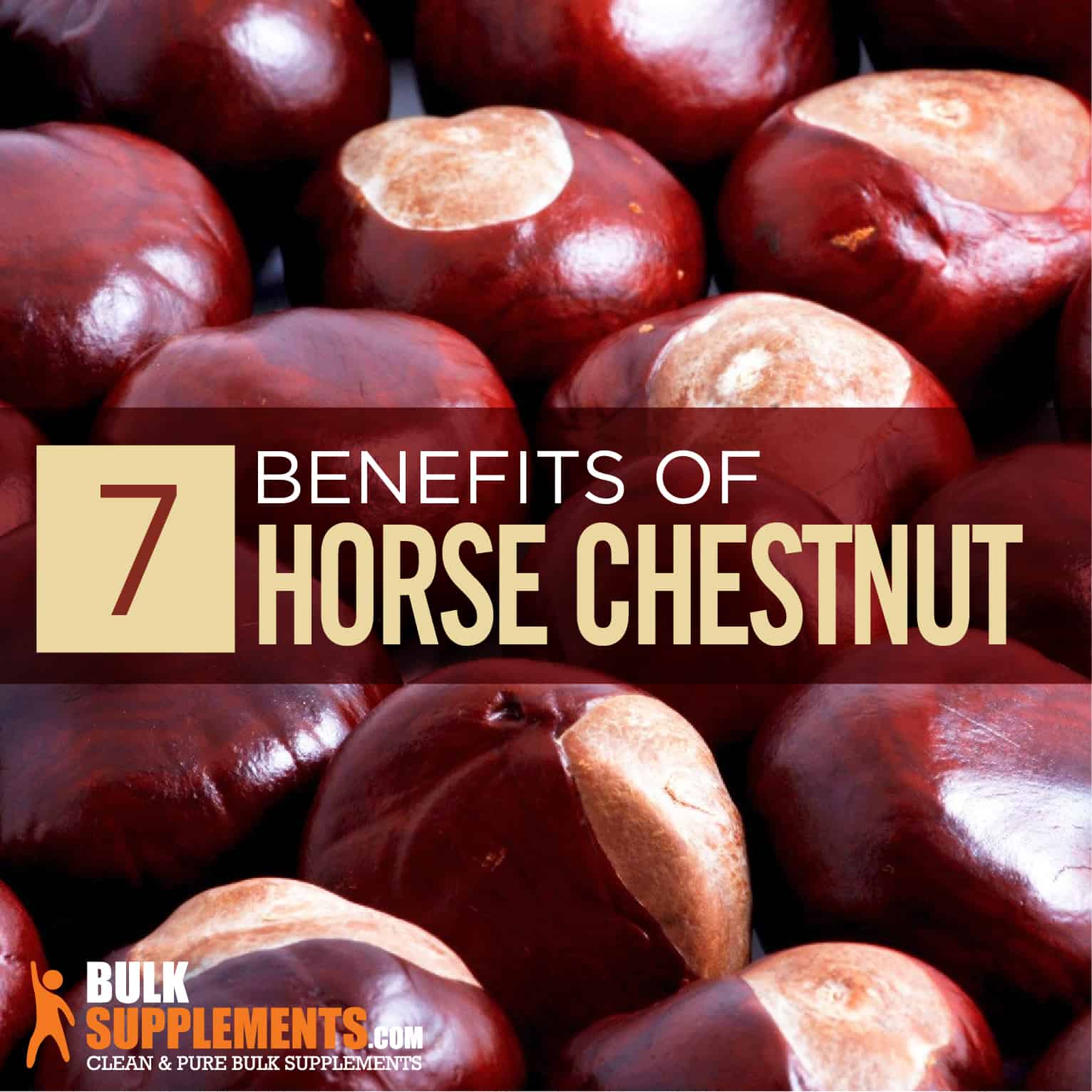 3 Ways to Use L-Citrulline DL Malate May Benefit Exercise

What is Horse Chestnut?

Horse chestnut trees are native to the Balkan Peninsula. They’re also known as conker trees. The tree produces fruit made up of a spiny capsule that holds one to three large seeds, in which horse chestnuts are grown.

Some research suggests horse chestnut could boost male fertility by improving symptoms of varicocele–a condition in which the blood vessels in the scrotum widen and swell (x).

Varicocele can decrease sperm production and sperm quality, while also causing testicles to fail to develop normally or to shrink in size (x).

One study examined a compound in horse chestnut extract called escin and its effectiveness at treating varicocele-associated infertility. In the two-month study, researchers gave one group of men escin, while the other group did not take escin. At the end of the trial, the men who took escin saw improvement in sperm density and sperm mobility, unlike those who did not take escin (x).

Additionally, the study concluded escin does not cause negative effects to vital signs, blood counts, liver or kidney function (x).

Research suggests that horse chestnut could treat chronic venous insufficiency (CVI), a circulatory condition of the legs and feet.

When blood travels through the body, it has to fight against gravity to get back to the heart. This fight is hardest in the legs and feet, but blood vessels are equipped to regulate this movement through a series of valves that block the blood from falling back down and away from their path of oxygenation (x).

But when these valves weaken due to age or general poor health, blood flows back down into the veins, resulting in red splotches or bulges in the veins that appear through the skin. A common therapy for this condition is wearing compression socks, which help to push blood back up and improve circulation. If the condition worsens, doctors may recommend surgery (x).

Horse chestnut seed extract is another potential treatment. Studies suggest it contracts major veins in the legs, promoting healthy circulation (x). It also works to significantly improve the pressure of blood flow for up to eight days (x). In these trials, researchers suggest that horse chestnut extract could be an effective and safe short-term treatment for CVI (x).

In one study, scientists noticed horse chestnut increased death of leukemia, breast cancer, and cervical cancer cells. One specific cancer cell, associated with a type of cancer known as acute T-cell leukemia, had a cell death rate of nearly 94 percent after treatment (x). While more research must be conducted, preliminary results suggest horse chestnut could be a promising tool in the fight against cancer.M

Horse chestnut heals wounds in two ways. First, one of its active compounds, aescin, can help kickstart the healing process in open wounds or other damaged tissue (x).

Fibroblasts cells become active when tissue is damaged. They form an extracellular matrix of proteins and other materials that act as a kind of scaffolding upon which other cells can build. They also help shrink the edges of an open wound (x) (x).

Studies suggest that horse chestnut’s healing abilities make it an effective anti-aging supplement. In one study, researchers examined a group of 40 healthy female participants. The women applied a gel containing horse chestnut extract to the skin around their eyes three times daily for several weeks (x). At the end of the study, researchers saw a noticeable reduction in wrinkles (x).

So how does this work? When applied topically, horse chestnut boosts the production of collagen–a protein that keeps skin elastic, firm and wrinkle-free (x).

Hemorrhoids are veins in your lower rectum and anus that have swollen due to a buildup of pressure, generally caused by constipation or other medical factors. Because it supports healthy circulation and reduces inflammation, horse chestnut could help relieve symptoms of existing hemorrhoids and prevent them from developing in the future (x) (x).

Horse chestnut extract may also benefit your digestive health by acting as a prebiotic. Take note, though: Prebiotics are different than probiotics.

Probiotics are foods that aid in digestion and overall gut health by delivering “good” bacteria into your gastrointestinal tract.

Prebiotics are non-digestible fiber compounds that are fermented and “eaten” by the microflora in your colon. When you take in prebiotics, you’re feeding the good bacteria your body needs for healthy digestion (x).

In an animal study, researchers found that horse chestnut extract acts as a prebiotic and may also help improve the effectiveness of probiotics (x).

Do not take horse chestnut if you are nursing or pregnant. The compounds in horse chestnut seeds and bark may irritate your gastrointestinal tract; talk to your doctor before taking it if you have a history of intestinal issues.

Avoid horse chestnut if you are are allergic to latex, as it could trigger allergic shock, itching, nausea, muscle spasm, or headaches (x) (x).

Horse chestnut may also negatively interact with certain medications like lithium, certain diabetes medications and anticoagulants; talk to your doctor before using horse chestnut extract supplements if you take any of these medications (x).

3 Ways to Use L-Citrulline DL Malate May Benefit Exercise