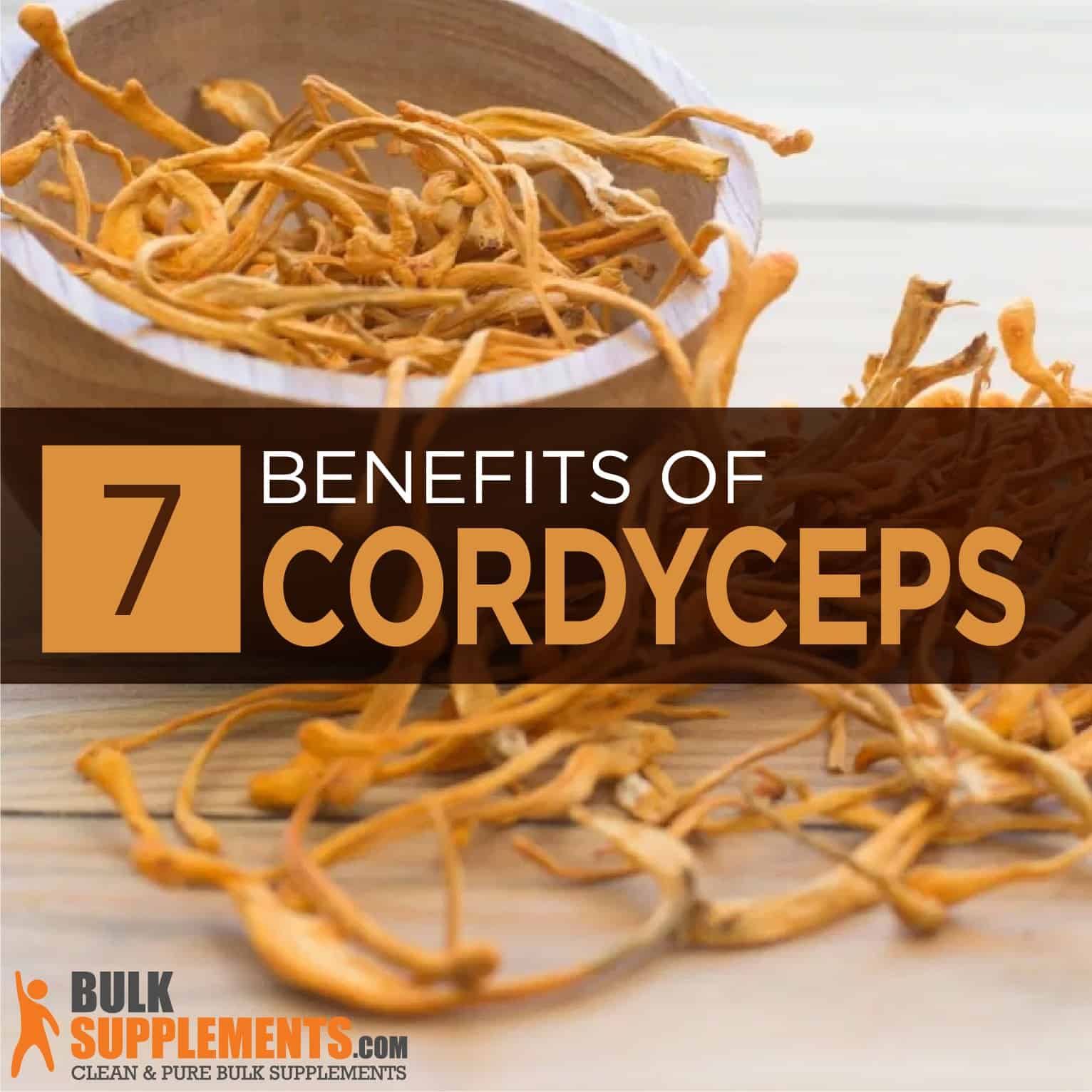 Cordyceps is a fungus that develops on the larvae of insects. Though it may not sound all that appetizing, this disease-fighting mushroom has been used in Chinese medications for centuries.

Cordyceps is popular in the United States and is present in many energy products and supplements. Some consider it a superfood. It offers potential benefits for numerous health problems and also fights infections, inflammation and free radicals. Moreover, it can help boost energy levels and improve athletic performance (x).

Cordyceps can help increase energy and minimize the onset of exercise-related fatigue. It may even help strengthen the body when fatigued (x). Athletes who undertake endurance exercise events like cycling, distance running and swimming showed an improvement in exercise capacity and tolerance after taking supplements containing cordyceps (x).

Supplementing with this mushroom can also help one boost testosterone levels, lower cholesterol levels and improve heart function (x). It may even increase the body’s ability to produce adenosine triphosphate (ATP), which plays a crucial role in delivering energy to the muscles and enhancing the way the body utilizes oxygen during exercise (x, x).

Cordyceps has antioxidant properties that can help prevent oxidative stress, fight free radical damage and fight the effects of aging. According to research, the high antioxidant content in cordyceps helps prevent aging and promotes body rejuvenation and longevity (x). It protects against the age-accelerating impacts of stress and also restores strength after mental or physical exertion.

Research on the anti-aging benefits of the fungus is primarily limited to animal studies. A Chinese study showed that cordyceps extract prolonged the lifespan of fruit flies by blocking oxidative stress to their cells (x). Another study on aging rats carried out in the Journal of Phytotherapy Research indicated that after consuming cordyceps extract, the rats experienced a significant increase in antioxidants such as glutathione peroxidase in the blood and a boost in their sexual function (x).

Research shows that the anti-inflammatory and antispasmodic properties of the mushroom can prevent heart complications like heart arrhythmias. Cordyceps also lowers the LDL (bad) cholesterol while increasing the HDL (good) cholesterol levels (x). It helps thin the blood and prevents the oxidation of LDL cholesterol, which results in plaque or blood clot formation in the blood vessels, causing blockages. In fact, studies show that patients who consume cordyceps powder supplements are less likely to suffer heart failure (x).

Cordyceps has numerous anti-inflammatory compounds like cyclosporines, polysaccharides and modified nucleosides (x). Research shows that these compounds can help to boost the immune system by enhancing the health of the respiratory, reproductive, cardiovascular and endocrine systems. A study by the Chung Shan Medical University Hospital showed that cordyceps reduced inflammation in the airways of mice and may help with the treatment of asthma (x). It is also beneficial in the treatment of inflammatory-related conditions like arthritis and leaky gut.

Studies show that cordyceps has inhibiting effects on cancer cells (x, x, x). It is also thought to reduce the size of tumors and improve tolerance to chemotherapy and radiation in cancer patients. It reduces the toxic effects on bone marrow resulting from these treatments and can reverse leukopenia, a side effect associated with several forms of cancer therapy (x). Leukopenia is a condition where there is a decrease in the number of white blood cells, resulting in inhibiting the body’s ability to fight infections (x). Studies show that cordyceps extract may be particularly helpful in preventing lung cancer (x).

Cordyceps may have an impact on sexual dysfunction in men. Several studies showed that men suffering from reduced levels of sexual energy or low libido experienced an improvement after consuming cordyceps supplement (x). The supplement can help the body use oxygen more efficiently and improve blood flow to different organs, which is essential for both physical and sexual function (x).

Cordyceps has been used to treat chronic kidney disease for years. Individuals with chronic kidney disease experience reduced kidney functioning, and cordyceps can improve this functioning (x). Studies show that it can inhibit renal fibrosis by blocking inflammatory pathways that alter the kidneys’ regular functions and produce fibrous scar tissue (x). It is also beneficial for kidney transplant patients. Of course, the use of cordyceps for kidney disorders should be monitored by professional medical personnel.

Side Effects of Cordyceps

Cordyceps is considered safe for use. However, it may present some side effects and interactions that people should be aware of, particularly those with some underlying health conditions or using certain medications.

Cordyceps stimulates the immune system and may over-activate specific immune cells in the body. It may interfere with medications for conditions like multiple sclerosis, lupus and rheumatoid.

Cordyceps may increase the risk of bleeding during surgery, and individuals should stop taking it at least two weeks before undergoing surgery.

Pregnant or breastfeeding women should avoid taking cordyceps. There are no studies showing its effects on pregnant women. However, it is advisable for them to avoid using the supplement.

Supplemental cordyceps is available in various forms, including powder. Dosage of cordyceps powder may depend on factors like the patient’s age, medical history and overall health. As a dietary supplement, take 1,500 mg (½ tsp) two or three times daily, or as directed by a physician.

Cordyceps boosts energy levels in the body, so it is best to take it a few hours before working out or engaging in sexual activities.

Cordyceps is a type of mushroom with several medicinal benefits. It has been applied in Chinese medications for centuries and is available in various forms. Health benefits of cordyceps include boosting energy levels, increasing libido, slowing the aging process, improving immunity and heart health, improving athletic performance and fighting the growth of cancer cells.