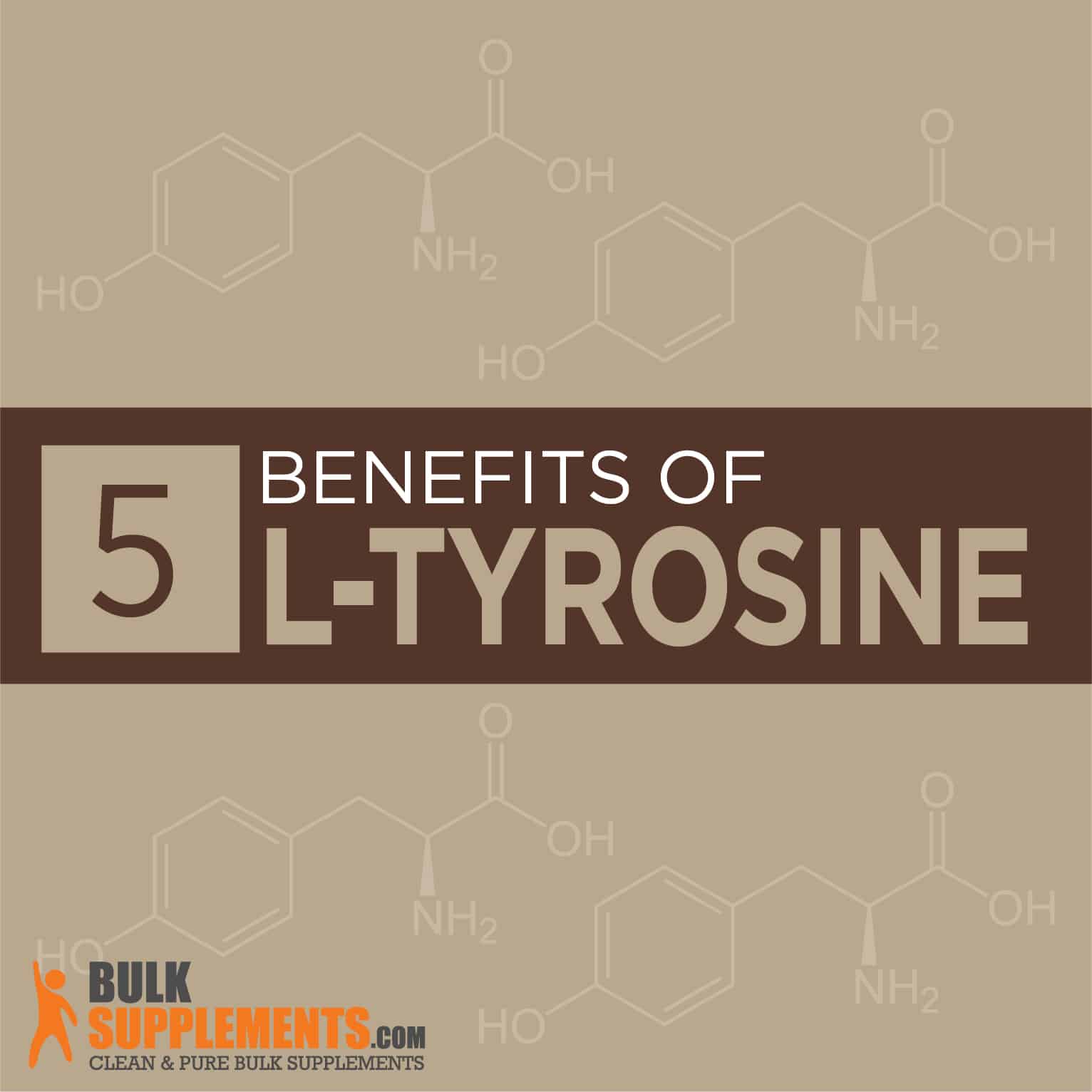 The human body produces around two million different proteins, and they are all made from just 20 simple building blocks known as amino acids. Nine of the twenty are considered essential because they cannot be synthesized by the body and must be consumed. Tyrosine is present in foods, but the body also produces it from the essential amino acid phenylalanine. Tyrosine helps produce several important chemicals, including dopamine, epinephrine and norepinephrine, melanin and hormones that regulate metabolism.

The name “tyrosine” comes from tyros, which is the Greek word for cheese. And cheese is where the amino acid was first isolated by German chemist Justus von Liebig back in the mid-1800s. It is present in many protein-rich foods, such as cheese and other dairy products, meat, poultry and fish (x, x).

Tyrosine is an essential component of dopamine, the neurotransmitter in charge of reward-seeking and the sensation of pleasure. Two more important chemicals, epinephrine and norepinephrine, also need tyrosine for them to be made. We know this pair better as adrenaline and noradrenaline, and their job is to regulate the ‘fight or flight’ response (x, x).

While everyone experiences stress from time to time, an excessive amount can produce a negative effect on your memory, attention, reasoning and ability to learn. Stress suppresses the production of neurotransmitters — chemicals that send messages around your brain and body. However, research shows that a tyrosine supplement can negate the effect of stress by reversing this neurotransmitter deficiency and improving memory (x, x).

In another study, cognitive flexibility — the ability to switch rapidly between tasks — proved to increase with a tyrosine supplement (x). Two other studies show that it can improve thinking in stressful situations (x, x).

Tyrosine may be helpful in improving not only cognitive function under stress, but also overall stress levels. Studies have shown that it helped participants handle difficult situations better, including when subjected to fatigue, cold, sleep deprivation and protracted work (x).

A tyrosine supplement may help you lose excess weight and maintain a healthy weight in multiple ways. First, by reducing stress levels, you may be less inclined to overeat. Second, by elevating levels of epinephrine and norepinephrine, a tyrosine supplement may suppress appetite while reducing fat stores. Third, the body uses tyrosine to make certain thyroid hormones that promote fat burning and increase metabolism. If a sluggish thyroid is causing weight gain, this supplement may help counter it. Finally, since it helps make dopamine, a mood-improving neurotransmitter, weight gain due to depression may decrease by taking in more tyrosine. However, researchers have only done limited testing in this area and their studies have so far only used combination supplements rather than tyrosine on its own (x).

Phenylketonuria (PKU) is a rare, but dangerous condition in which the body cannot metabolize the amino acid phenylalanine. This causes a build-up of the amino acid in the system and can lead to permanent brain damage. This is why newborns are tested for it in the first days of life (x).

The usual treatment for this condition is to follow a diet that is low in phenylalanine. But since tyrosine comes from phenylalanine, deficiency is a common problem and often results in behavioral problems. So far, research has been inconclusive as to whether a tyrosine supplement may help treat PKU and needs more studies (x).

Depression has many different causes and we don’t understand all of them. But many believe that depression is at least partly the result of an imbalance of neurotransmitters. Thus, doctors prescribe antidepressant medications to help rebalance these chemicals. And because tyrosine is used by the brain to make some of the neurotransmitters that may be out of balance, some believe that increasing levels of tyrosine will increase dopamine levels and result in a better mood. Research does not support this claim, however, because depression is a complicated condition. But individuals with low levels of dopamine, epinephrine or norepinephrine may well benefit from this supplement (x).

The body absorbs tyrosine supplements faster than tyrosine obtained from food sources because it does not need to be digested. It is able to cross the blood-brain barrier fairly quickly and be used right away.

Users can take tyrosine as free-form L-tyrosine or as N-acetyl L-tyrosine (NALT). While NALT dissolves easier in water, the body cannot readily absorb it. This means you would have to take more of the supplement to have the same result. Therefore, many people prefer free-form despite the fact that it takes longer to dissolve.

Because tyrosine is required to make some of the most important neurotransmitters — epinephrine, norepinephrine and dopamine — anyone who suffers from anxiety, stress or is looking to improve memory may benefit from a supplement.

L-Tyrosine Side Effects and Dosage

Whether it’s in the form of L-tyrosine or NALT, it is best to take 400 mg once to thrice a day, ideally before meals, or as instructed by a doctor (x).

Amino acids occur naturally in foods. Therefore, the FDA considers them safe. Moderate usage should cause no problems for most people. However, tyrosine may interact with certain medications, including antidepressants that contain monoamine oxidase inhibitors (MAOIs). Tyrosine breaks down into the amino acid tyramine, a regulator of blood pressure. Many foods such as cheese, beer, smoked meat and soy products contain high levels of tyramine. MAOIs block the enzyme that breaks down tyramine. The combination of the two can lead to dangerously high blood pressure. While researchers are not sure if a tyrosine supplement will cause high levels of tyramine, you should talk to your doctor before adding this supplement to your health regimen if you are already taking MAOIs (x, x).

Those with an underactive or overactive thyroid, or who take thyroid medicine should consult with a doctor before starting a tyrosine supplement. The reason is thyroid hormones must be regulated within precise ranges, running neither too high nor too low. Because tyrosine is used in the making of these hormones, specifically thyroxine (T4) and triiodothyronine (T3), supplementation may influence them and raise them to dangerously high levels (x).

Tyrosine may also interfere with the Alzheimer’s medication Levodopa because they are both absorbed in the same place in the small intestine. To avoid this problem when supplementing, the two should be taken several hours apart. Despite this fact, researchers are looking to see if a tyrosine supplement can improve cognitive function in seniors (x).

Tyrosine is responsible for making important chemical messengers and is especially helpful in stressful situations. Other than in combination with certain medications such as MAOIs, supplementing with tyrosine is safe for most people. Research on tyrosine continues and it may take some time, but scientists are sure to unlock more secrets of this valuable amino acid.