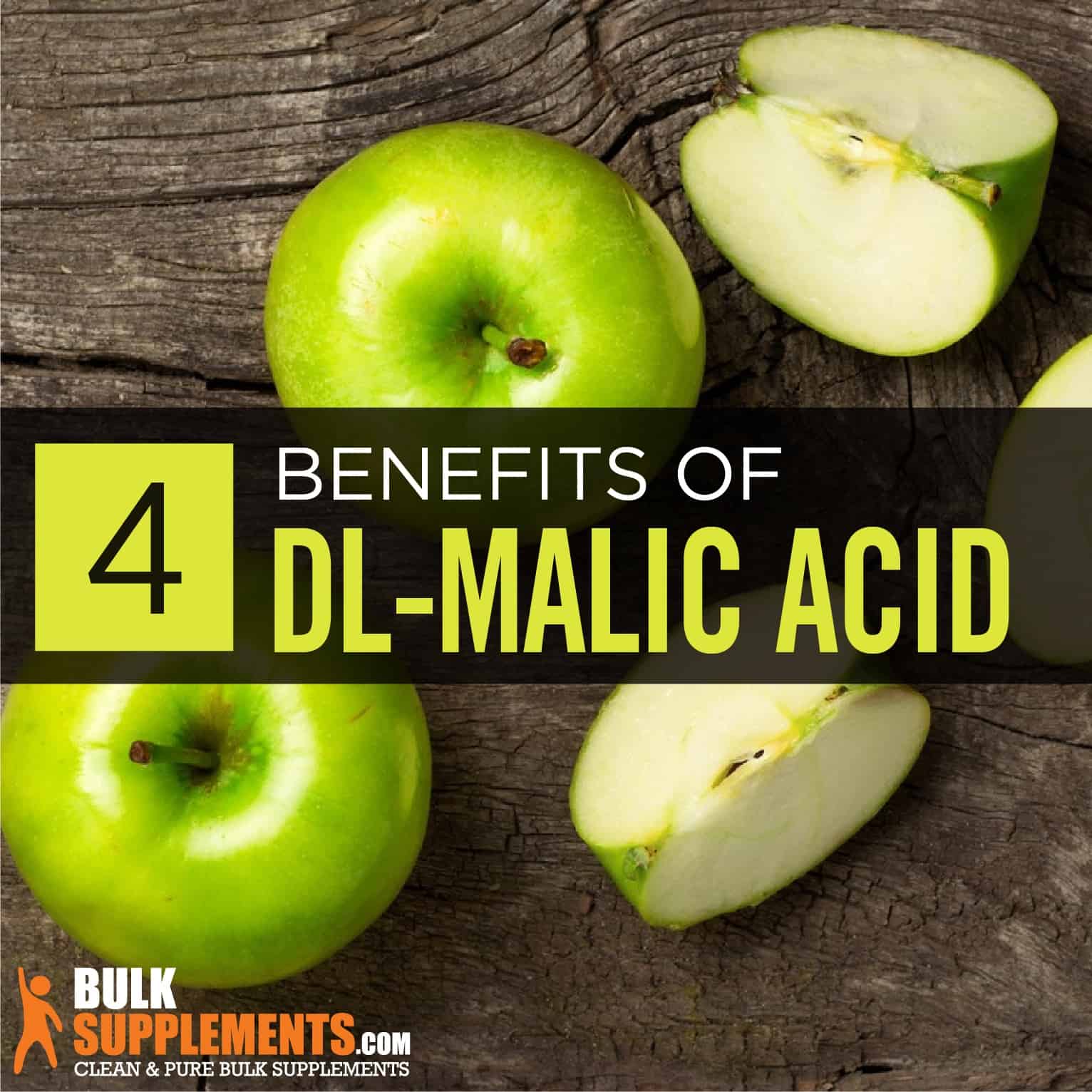 Fruits and wines have several different unique benefits, besides just being consumed and enjoyed, and one of those benefits is that they are a source for an acid chemical called DL-malic acid which has been known to produce positive effects for your health. Malic acid is an alpha-hydroxy acid, which is a class of natural acids that is said to produce a variety of benefits (x). It can be taken orally or used topically to receive its health benefits. On top of the health benefits it has been said to produce, malic acid is also sometimes used as a flavoring agent in food and to adjust acidity in cosmetics (x).

What Does Malic Acid Do for the Body?

There are a variety of processes happening in your body all of the time — one of them being the Krebs cycle. The Krebs cycle is a process during which the body makes energy (x). When applied topically, it is said that malic acid may help reduce signs of aging, help treat acne, remove dead skin cells and promote skin hydration. It can be used to help alleviate pain as well as other symptoms caused by fibromyalgia (x).

In 2013, there was research published in the Journal of Drugs and Dermatology indicating that malic acid had the ability to help treat melasma, which is a common disorder marked by patches of abnormally dark skin. The research said that people with melasma were assigned a skin-care regiment that included the topical use of malic acid and vitamin C. These specific people were followed up to 26 months (x). While vitamin C alone was found to be an effective short-term treatment for melasma, the research indicated that a treatment regimen of a combination of malic acid and vitamin C helped to maintain that improvement (x).

There were a number of studies published back in the 1990s and the early 2000s that showed that when malic acid is applied to the skin, it may help reverse sun-induced signs of skin aging by increasing the body’s production of collagen (x). Because malic acid is sour and acidic, it can help clear away dead skin cells when applied to the skin (x). This class of alpha hydroxyl acids help stimulate exfoliation of the skin because they interfere with how our skin cells bond. For those reasons, some skin care products that contain malic acid may provide benefits such as exfoliation, skin hydration and smoothing and the reduction of wrinkles (x).

Additionally, early research has shown that applying an alpha hydroxy acid cream that contains malic acid reduce signs of acne in some people.

The sourness of malic acid helps create more saliva, which in turn helps with dry mouth. When using malic acid to treat dry mouth, you would use a mouth spray that contains malic acid, xylitol and fluoride which has been more effective in improving dry mouth than using a mouth spray that only contains xylitol and fluoride (x). Researchers have explored the use of a one percent malic acid oral spray compared to a placebo in people with dry mouth resulting from the use of antidepressants in a study published in Depression and Anxiety. Patients used the sprays for two weeks and after that time, those using the malic acid spray had improved symptoms and increased saliva (x).

It was noted back to a study published in the Journal of Rheumatology in 1995 when they found that taking malic acid in combination with magnesium helped alleviate pain and tenderness in patients with fibromyalgia (x). The study consisted of 24 people who had fibromyalgia who were either assigned a placebo or a combination of malic acid and magnesium and used these treatments for six months. Those who were treated with the combination of malic acid and magnesium saw a significant decrease in pain and tenderness. While these results are promising, there is still more research to be done, as this research is dated.

There are some proponents of malic acid being used to boost sports performance because it is thought that it can increase your energy, increase your exercise endurance and help fight muscle fatigue (x). When used to produce this type of benefit, it is sometimes combined with creatine supplements to help the body better absorb creatine.

The lack of recent research on malic acid means that there is little known about the safety of using malic acid long-term or as a regular supplement in your routine. Some side effects have been noted such as headaches, diarrhea, nausea and allergic reactions (x).

When applied to the skin, malic acid is generally considered safe. However, you should stop use if you experience irritation, itching, redness or other side effects. It is important to always wear sunscreen when using malic acid, since its class of acid are known to increase your skin sensitivity to sunlight (x). You may want to patch test malic acid before applying it on your skin. To do so, put a small amount of it on your wrist and wait 24 hours to see if your skin reacts. If you experience burning, wash the product off immediately (x).

Due to lack of research, not enough is known about the safety of malic acid during pregnancy and breast-feeding when used as a medicine.

Always consult your doctor before adding any vitamin or supplement to your nutrition routine.

While there have been few studies published about testing the health effects of malic acid when taken in supplement form, there is some evidence that malic acid supplements are beneficial. In a preliminary study published in 2014, it was shown that an increase in malic acid consumption may increase urine pH and citrate levels, decreasing the likelihood of kidney stones. This is because malic acid is a precursor to citrate, which is a substance, believed to prevent calcium from binding with other substances in urine that form kidney stones (x). Therefore, these researchers concluded that malic acid supplements may be useful for treating calcium kidney stones.

Malic acid supplementation, along with physical training, helped to significantly increase the physical performance of sprinters, according to a study published in Acta Physiologica Hungarica in 2015 (x).

DL-malic acid can also be found in the form of a powder that is soluble in water, alcohol and other solvents. When found in this form, DL-malic acid is often used in sodas, jellies and jams, candy, dairy products, canned and frozen foods, meat products, flavors and spices (x).

Malic acid is naturally found in a variety of fruits and vegetables, including the following:

Always consult your physician before adding malic acid into your regular daily intake and routine.

Malic acid is an acid found in fruits and vegetables that your body naturally produces when it converts carbohydrates to energy. It can offer a variety of health benefits and is the most safe when using it topically to help with pigmentation, acne and skin aging. Malic acid supplements have sometimes been shown to help people with certain conditions, such as fibromyalgia, but the lack of research inhibits it from being a standard method of treatment.