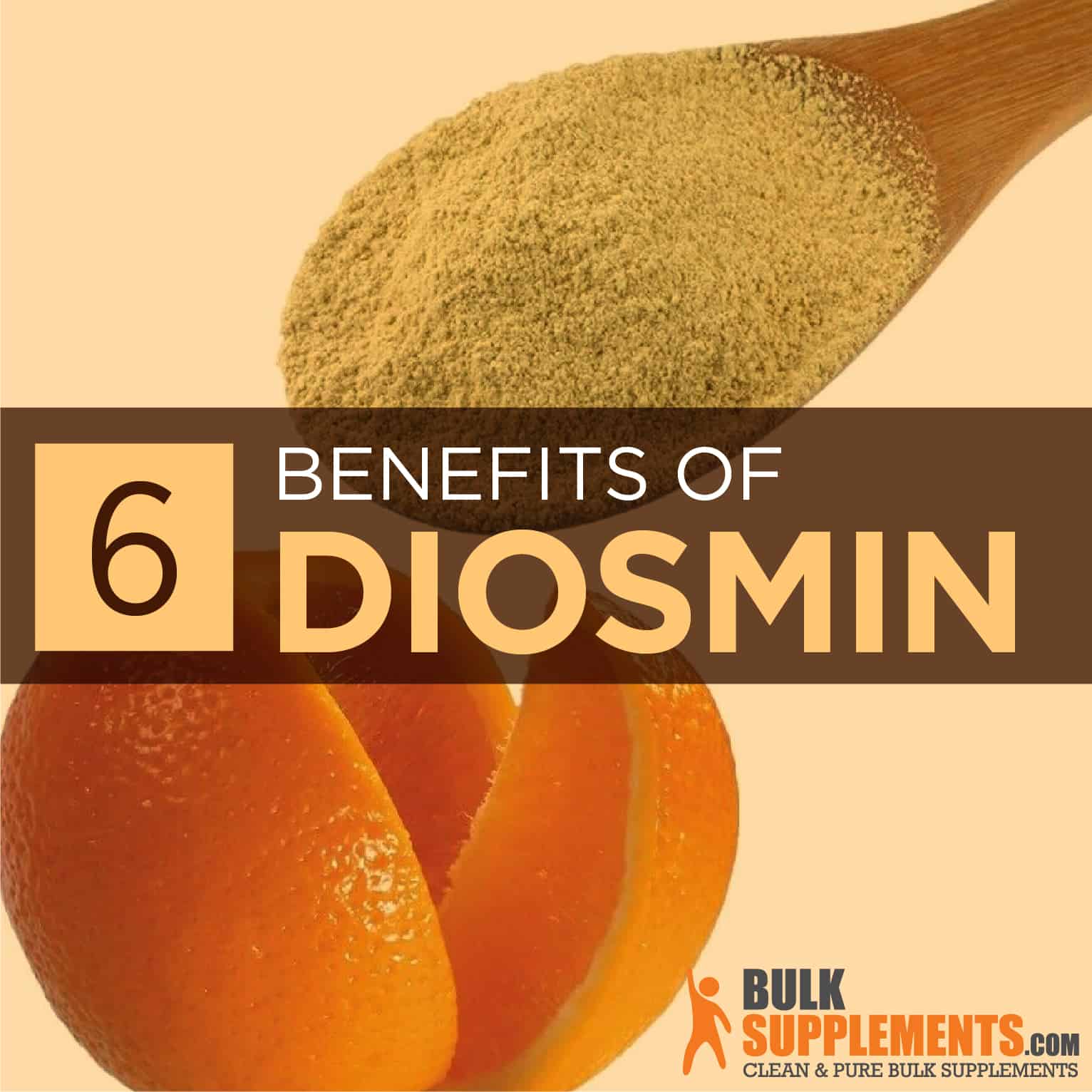 Diosmin is a type of plant chemical that is primarily found in citrus fruits. It is used to manufacture medicines to treat disorders of the blood vessels, such as varicose veins, poor circulation in the legs, hemorrhoids, blood clots and bleeding in the eye or gums. After breast cancer surgery, diosmin can be used to treat lymphedema, or the swelling of the arms, radicular pain or to offer protection against liver toxicity. Most often, diosmin is used in combination with hesperidin. Hesperidin is also a plant chemical. Diosmin works by reducing inflammation, pain and swelling by restoring normal vein function (x, x, x).

Bioflavonoids, also called flavonoids, are a group of “polyphenolic” plant-derived compounds. It is believed that about 4,000 and 6,000 varieties of this are known. These are mainly used in supplements, medicines and other medical or health-related uses. It is naturally found in certain vegetables, fruits, wine and dark chocolate. They are known for the high amount of anti-oxidants (x).

Bioflavonoids are a group of “polyphenolic”, also known as flavonoids. These are generally used in supplements and medicines. Due to the presence of a high level of antioxidants, free radical damage can be curbed since this is believed to play a role in cancer, heart ailments and more. Antioxidants can help your body deal better with viruses and allergies. Flavonoids can be seen in high concentrations in the bloodstream, possibly impacting the transportation of antioxidants. The antimicrobial properties of bioflavonoids help fight microbial infection effectively (x, x).

These bioflavonoids protect your cells from free radical damage. Free radicals are toxins in the human body that damage healthy cells. This process is called oxidative stress (x).

When antioxidants fight off free radicals, aging, cancer and other issues are slowed down or completely prevented (x).

By consuming more bioflavonoids, allergic diseases like allergic rhinitis, allergic asthma and atopic dermatitis can be better managed and controlled. The reason behind this is that many allergic diseases are believed to spread due to excess oxidative stress. Here, the flavonoids can help stabilize our body and reduce inflammation (x, x).

Yet another problem that occurs due to oxidative stress is coronary artery disease, also called coronary heart disease. The antioxidants here will lower the risk of death and improve your heart condition (x, x).

Flavonoids are known to protect nerve cells from getting damaged. They help with the regeneration of these cells outside the spinal cord and the brain. Since many diseases like dementia are caused due to oxidative stress, the elements in flavonoids help care for your body better along with helping blood flow smoothly to the brain, possibly preventing stroke. This will also assist in improving cognitive function (x, x).

Diosmin is known to work wonders with blood vessel related disorders. Since hesperidin works closely with diosmin, consuming them together offers more relief and is considered to be a better cure (x).

Diosmin for varicose veins is also used to improve postoperative cardiac function in those undergoing coronary artery bypasses grafting (CABG) surgery. In addition to this, diosmin is also useful to treat pelvic congestion caused by pelvic varicose veins. This is commonly seen in both men and women and diosmin is known to successfully treat both (x, x).

This refers to the condition that impacts the veins of our legs. For example, in the condition of chronic venous insufficiency, veins are not able to return blood from the legs to the heart in an efficient manner. Diosmin is considered an excellent source of vitamins for poor leg circulation. It is also linked to ankle swelling, night-time cramps, varicose veins and so on. For such conditions, diosmin and hesperidin work together to treat chronic venous diseases. After the medication, it is seen that the reduction in fluid volume in the legs is more frequent. Besides diosmin, compression dressing will also help cure leg ulcers (x, x).

Diosmin is not a new medical discovery at all. It has been in use as a medical aid since 1969 as a phlebotonic and vascular protector for hemorrhoids and venous leg ulcers, among other health issues. It helps with both chronic and acute conditions and is effective for both men and women (x).

Swelling of the Arms (Lymphedema)

Lymphedema refers to a blockage in the lymphatic system and is usually caused by the removal of the lymph node, usually during cancer treatment. The lymphatic system is a part of the immune and circulatory system. The prime symptom that accompanies this issue is the swelling in the arms or legs, along with some pain. It is common to see patients experiencing this post breast cancer surgery. One popular cure is to consume butcher’s broom root extract containing hesperidin and vitamin C. Consuming this for a few months will reduce the swelling in the forearm and upper arm. The results can be clearly seen. It is also known to promote with better mobility (x, x).

A high level of blood glucose is referred to as diabetes and it is difficult to regulate without specific medicines. Taking hesperidin and diosmin supplements by mouth for a couple of months is believed to effectively decrease blood sugar levels. Not only this, but it is also known to increase blood sugar control in women with type 2 diabetes (x, x).

Side Effects of Diosmin

While diosmin offers a lot of benefits and helps cure many health issues, it is also known to cause a few side effects.

The most common side effects of diosmin include diarrhea, headache and stomach and abdominal pain (x, x).

Diosmin is known to possibly interact with certain other medications, such as the anti-epileptic drug carbamazepine, antihistamine fexofenadine and anticoagulant medication. Anti-coagulant medicines are also referred to as blood thinners and are generally prescribed to prevent blood clots. The antihistamine fexofenadine is used to treat allergies, such as urticarial or hay fever. Possible interactions of these medications with diosmin could also lead to other issues. This is also one of the major reasons that one should not self-prescribe diosmin as it could have fatal consequences (x, x, x).

It is advised that you don’t consume diosmin while pregnant. It is also not recommended for those who are breastfeeding. Hesperidin could be safe when consumed orally, but due to the lack of research, it is better to stay away from it during this period (x, x).

Diosmin is not recommended for children. It is contraindicated for dermal irritations, wounds and mucosa. This should not be used to treat eczema, dermatitis or urticarial (x).

The most common side effect is found to be mild GI and autonomic disturbances. This includes hives, itching, pruritus, erythema, nausea and digestive troubles. Ischemic damage and excessive peripheral vasoconstriction are also possible, although extremely rare (x, x).

It is highly advised that you don’t consume diosmin without advice from your doctor, especially for not over three months. In most cases, diosmin is given in addition to hesperidin. It is advised to be taken orally. Diosmin is available as a nonprescription dietary supplement in some countries like the United States and in Europe (x).

Diosmin is a kind of plant chemical usually found in citrus fruits. It is commonly used in treatment to cure disorders of blood vessels. It is used to treat a variety of health issues, such as varicose veins, hemorrhoids, lymphedema, blood clots and more. The high level of antioxidants in the bioflavonoids comes useful while fighting against free radicals. Diosmin is usually given in combination with hesperidin.