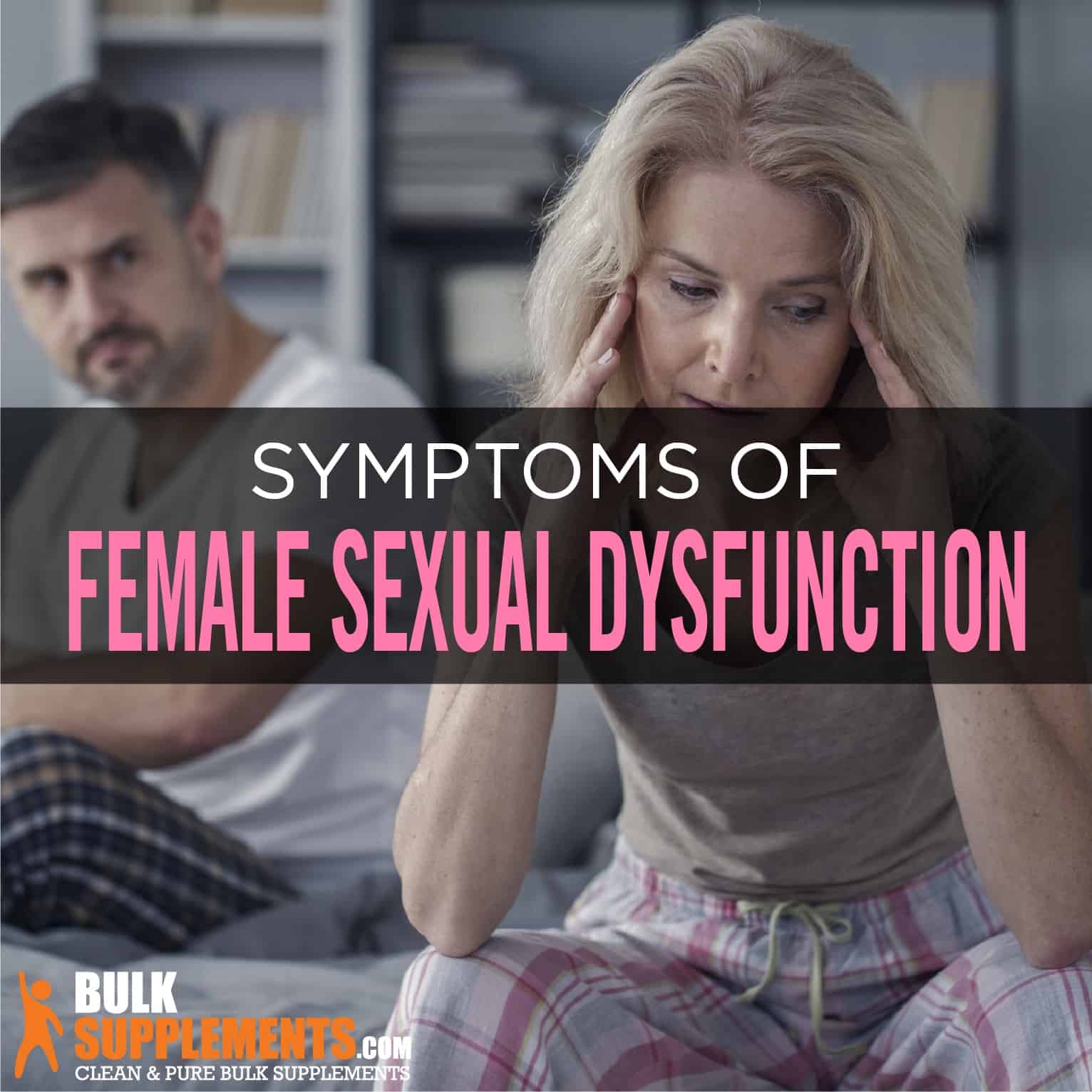 What is Female Sexual Dysfunction?

One of the leading problems in relationships worldwide is sexual discontent, which may be experienced by one or both partners involved. In many cases, it is a medical problem among females that is referred to as the female sexual dysfunction.

According to female sexual dysfunction statistics, this affects up to 40 percent of all women in sexual relationships (x). Unfortunately, many of them don’t see the condition as medical. This is understandable, as it may be a bit embarrassing to talk about. Others don’t even know they have it.

Sexual dysfunction in females is characterized as a continuous and persistent failure to respond to sex or arousal (x). It may also be symptomized by lack of orgasms, sexual desire and even pain during sex. Female sexual dysfunction can occur in any of the four stages of the sexual cycle; excitement, plateau, orgasm and resolution.

This condition affects a number of women at some point in their lives. It may occur in all sexual circumstances or specific cases. It can also affect women throughout their lives or at a specific stage.

Sexual functioning of every individual is affected by various factors. They include complex chemical reactions in the body, emotional and psychological health, the environment, beliefs and lifestyles.

Lack of Sexual Interest or Desire

This may be one of the most common and obvious symptoms of female sexual dysfunction. The affected individual simply has no interest in sex and does not feel aroused by any sexual acts (x). It may also be characterized by a lack of willingness to have sex. It may be brought about by many factors, including pregnancy, depression, fatigue and mental stress (x).

As a separate condition, this disorder affects the woman’s ability to get or stay aroused (x). While she may have a desire for sex, she is unable to get excited or maintain the arousal during sex. It can be observed when a woman is insufficiently lubricated. Causative factors include problems with the blood flow to the vagina and clitoris and anxiety (x).

The woman may also have difficulty in achieving orgasm despite continued stimulation and arousal. It can be caused by many reasons including lack of sexual experience, inhibition or knowledge. It may also be brought about by psychological factors such as anxiety, sexual abuse, trauma and guilt (x).

This refers to a condition where the woman feels pain when aroused or when contact is made with her vagina. It can be brought about by several medical factors such as ovarian cysts, a pelvic mass, vaginitis, endometriosis, a scar from previous surgery and insufficient lubrication (x).

Vaginismus may also cause pain during sex. It is a painful and involuntary muscle spasm in the vaginal entrance. It often occurs in women with sexual phobias, including fear of pain during penetration.

Many factors contribute to the development of female sexual dysfunction. They include:

Any medical condition, especially one that interferes with blood flow as well as mental health, is likely to contribute to the development of female sexual dysfunction. Such include (x):

Some medications can also trigger the condition. They reduce your desire for sex and consequently your ability to orgasm. They include (x):

Drugs, alcohol, and substance abuse is also a major culprit. When left untreated, it may impact sexual functioning in both men and women.

Untreated mental conditions such as stress and anxiety may hinder a woman’s sexual performance, especially when previous incidences of sexual abuse cause them (x). Depression is harmful in the long term and may cause many more issues, including sexual dysfunction. Other psychological factors include (x):

A decrease in estrogen levels often means a lower sexual response. Generally, it causes less blood to flow in the pelvic and genital region. This reduces genital sensitivity, which consequently leads to a lower desire, response and arousal and orgasm (x).

Reduced estrogen levels also cause a thinning and stiffening of the vaginal lining, which causes pain during sex (dyspareunia), especially in women who are not sexually active (x).

These hormonal drops occur after childbirth, during breastfeeding and after menopause. It often causes vaginal dryness, which leads to pain during sex.

Understandably, many women find it difficult to discuss their sexual matters with a doctor. This is probably why many of them suffer from the condition silently. If you suspect that you have the condition, reach out to your family doctor or a gynecologist, or someone you could trust. Remember that when left untreated, the condition affects your sexual life and makes it an unpleasant experience.

During the session, the doctor will try to get as much information about your past and present sex life. Open up and speak honestly so that he or she can find the best solution to it.

The doctor may also perform a physical examination of your pelvic area. This should help him or her identify any changes such as the thinning of the vaginal lining or scarring after surgery. They could be the cause of pain during intercourse.

They will evaluate all your physical symptoms and most likely conduct a pap smear to check any variations in your cervical cells.

Blood tests may also help the doctor identify any diseases or underlying conditions that could be taking a toll on your sexual life. They may also order additional tests to rule out any possible diseases that you could be suffering from.

If the doctor is unable to identify any physical conditions affecting your sexual life, he or she will refer you to a counselor or psychologist. Here you will discuss your attitudes and views towards sex, as well as your experiences. The aim is to uncover any feelings, opinions or history that could be causing the dysfunction. Once the doctor reaches a good understanding, they will recommend a treatment plan they find most effective in treating sexual dysfunction.

The treatment of every case of female sexual dysfunction depends on its cause. Some women prefer to leave it untreated as long as it does not bother them or their partners. Seeing as it is not life-threatening, there is no particular urgency to see a doctor. Here are some of the most effective methods of treating sexual dysfunction in women:

Anxiety, anger and generally, a poor attitude towards sex caused by any disputes can only be solved when the problem is resolved. There is no medicine one can take to take away the frustration and enjoy sex at any given time.

This is especially recommendable if one has been experiencing trauma from an abusive sexual past. It is also the best solution for an individual suffering from anxiety, guilt, frustration and other feelings that hinder their sexual performance (x).

This will solve many more problems besides sexual dysfunction. Consuming alcohol in reasonable amounts helps your body keep a balance that doesn’t interfere with your sex drive. Exercising helps promote self-esteem and get rid of poor body images (x).

Sometimes, the solution is as simple as using enough lubrication during sex. If the vagina does not self- lubricate enough to have sex comfortably, consider using a lubricant. This will help get rid of the pain that comes with too much friction during penetration (x).

This is for women who find it hard to enjoy sex because of worrying about getting pregnant or contracting STIs. Use protection where you can (such as the daily pill, IUDs, and condoms) and try to reduce the number of sexual partners you have. This cuts down the chances of getting sexually transmitted infections such as HIV/AIDS as well as unwanted pregnancies (x).

Naturally, DHEA is produced in the adrenal glands and converted to estrogen and testosterone. It, however, declines with age, which results in low levels of estrogen in women and consequently, increased chances of developing sexual dysfunction. Studies conducted suggest that DHEA supplements could help increase the production of the hormone estrogen and boost sexual satisfaction as well as libido (x). It has also been used in female impotence treatment.

Ginkgo has been in use for centuries all over the world for various reasons. In traditional medicine, it was used widely for its respiratory and circulatory health properties. Though not yet progressive, studies are still being conducted to see whether the anti-depressant properties of the herb are effective in treating female sexual dysfunction (x).

L-arginine is a critical amino acid in the body that helps produce nitrogen oxide and relax the blood vessels to reduce pressure and promote smooth blood flow. Though studies using the supplement appear successful to an extent, it is hard to know what exactly helped lessen the symptoms of sexual dysfunction. This is because the research was conducted using a combination of L-arginine and other compounds (x).

Also called the puncture vine, tribulus terrestris is native to Asia and has been in use for quite a while for the supposed sexual benefits it has to offer to women. The rumored aphrodisiac has been put to the test in various studies and proved to be quite the treatment for female impotence as well as sexual dysfunction (x).

Even though it is a common treatment for erectile dysfunction in men, ginseng may also promote the sexual health of women. When tested on menopausal women, ginseng improved their sexual functioning quite significantly with no side effects. It is, therefore, an excellent supplement for the condition (x).

Female sexual dysfunction is a condition that affects a woman’s ability to get and stay aroused, her desire for sex and her ability to enjoy it. It may be caused by several psychological factors such as an abusive sexual past, anxiety and depression. Risk factors include drug and substance abuse, as well as untreated depression and anxiety. One can treat the condition through therapy and counseling as well as improved communication and sexual awareness between partners. Some supplements that help reduce the symptoms include DHEA, ginkgo and ginseng. Female sexual dysfunction is not a medical emergency and can stay untreated as long as it does not affect the individual or her partner.